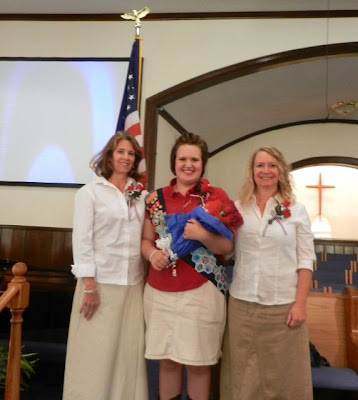 On Veterans Day my co-coordinator, Caroline, and I had the honor of presenting the Stars and Stripes Award to our troop's third recipient, Sarah F.

The Stars and Stripes Award for American Heritage Girls is the equivalent of the Eagle Scout rank for Boy Scouts. Sarah put in hundreds of hours on her project, called Girl in the Mirror. This wasn't an easy project. Sarah, who lives in an area where rates are staggering for teen pregnancy, attempted suicide, and drug use, created a program for at-risk teen girls. She started with a weekend retreat for girls to soak in faith-based encouragement and to instill value, worth and perseverance in teen girls.

Her weekend included a beautiful dinner, devotions, games, makeovers, and—my favorite part—a presentation by Women at the Well. This is a group of women who are recovering from various "life-controlling problems," particularly substance abuse. They did skits, songs, and testimonies that were incredibly powerful. I am sure there was not a dry eye in the room.


I'm just barely touching on all that Sarah did for her project. Besides the planning and implementing, she also had to organize and supervise troop members, ranging in ages from 5-17, and adults who were helping her with her project. She had girls making bookmarks, placemats, and goodie bags, as well as having a whole team of older girls helping her with the actual retreat weekend.

After the project, Sarah had to write the whole thing up, have a Board of Review, and submit a very thick binder to the American Heritage Girls national office. We all waited on pins and needles for her final approval—which came at last, to no one's surprise.

The whole nine-month project culminated this weekend with her ceremony. Unfortunately because it was on a Sunday and an hour away from where 99% of our troop lives, only a few of our troop members could attend. But Sarah had a full house with her own church congregation and her family.

It was a beautiful ceremony. I especially liked the flower ceremony. Each flower represented one part of the AHG creed: to be compassionate, helpful, honest, loyal, perseverant, pure, resourceful, respectful, responsible, and reverent. The girls put them in a vase, one by one. Read below for the explanation. 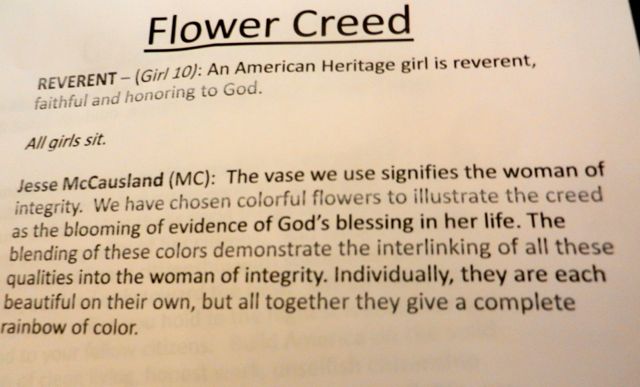 We're so proud to have Sarah join the growing ranks of Stars and Stripes Award recipients—she was #60 nation-wide—in American Heritage Girls. 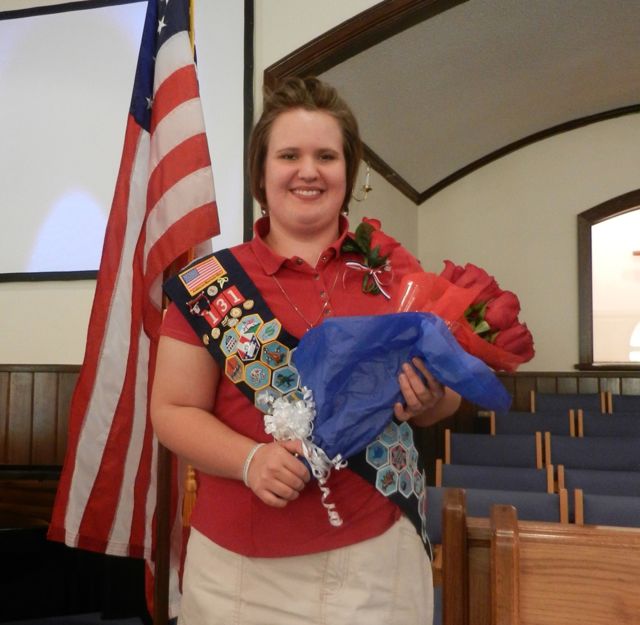 (Check out the fantastic front page about Sarah in her local newspaper, The News-Herald.)
Posted by Sarah @ Sarah at SmallWorld at 8:34 AM