* I'm sick. I have the worst cold I have had in years. (I probably say that every year.) Yesterday I had to teach class, and then I came home and collapsed. Today I have to go to the eye doctor, and then I plan on coming home to collapse. Yes, I am spreading my germs around town, just like every one else. So wash your hands and don't pick your nose.

• Last night our co-op had its annual "Black and White Dance." I hated not to be there, chatting with my mom friends and taking covert looks at my beautiful daughter. But I was at home eating vanilla ice cream and reading, which is my version of collapsing. Here she is before the dance: 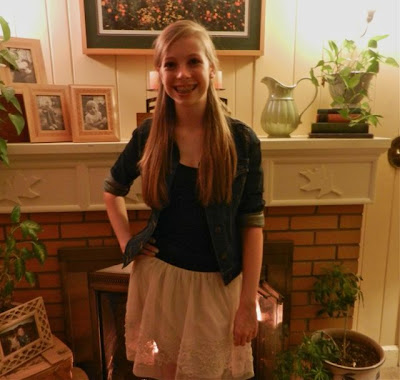 She's so beautiful. I was just emerging from my awkwardness at this age. I think we had it rougher in the 80s. 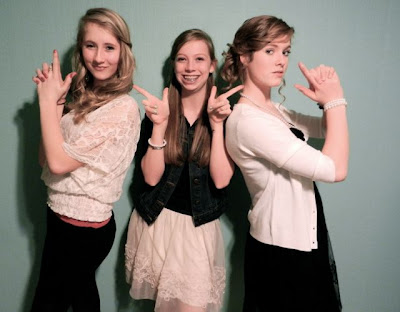 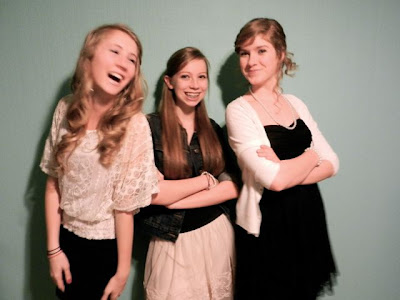 Here she is with her two trusty sidekicks. They said last night's dance was the best ever. After the dance a bunch of her girlfriends came over for a High School Musical bash. I have no idea why. They thought it was hilarious. I could hear them still at 4:45 a.m., singing and laughing. I am so grateful that she has such good friends.

* So, I've made an observation about mom blogs. I truly believe that mom blogs that get an insane amount of traffic have this in common:

1) a tragedy, and/or
2) sharp wit, bordering on constant sarcasm and flippancy, and/or
3) constant give-aways.

(Pioneer Woman is probably an exception to this. She is witty, but I wouldn't call her wit sharp nor is she sarcastic. She has a great deal of warmth about her writing. She does give some awesome stuff away, though.)

* So big deal, right? Except that I am a little competitive, and sometimes I think about making tons of money on my blog. Or more than that, getting some kind of Big Award, like being on Babble's Top 100 Mom Blogs. It's absurd, I know. I'm still on blogger, for Pete's sake—I don't even have a WordPress blog! How lame is that? But I have been thinking about it.

* But. Let me say right now that I do not want any tragedies in my life, nor do I want to spend 6 hours/day on my blog, nor do I want to give stuff away, nor do I wish to be constantly sharp-witted. It clashes with the voice inside my soul.

* And that's all I have to say. It's a Saturday afternoon. The sun is shining, the daffodils are flowering, and, in frenzy of domesticity, Randy has made banana bread. I am off to the eye doctor, who I hope will give me a prescription so magical that my 46-year-old eyes will be able to read small print.
Linked up at Miscellany Monday at lowercase letters
Posted by Sarah @ Sarah at SmallWorld at 12:43 PM

Email ThisBlogThis!Share to TwitterShare to FacebookShare to Pinterest
Labels: musings, Slices of Life