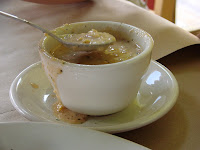 I've been cooking up a storm during the month that our oldest has been home for college. It's fun to cook for someone who has been eating college food for a few months and is desperate for a home-cooked meal.

Last night was his last supper at home until spring break, so I gave him a choice of pork chops and rice or crab chowder. It was a hard choice for him, but eventually he settled on the soup. This was my first attempt, and he said it was the best soup ever.

And here is the recipe for pork chops and rice, which I'll make later this week and miss him.

Brown chops well on both sides in skillet. Remove and brown onion slices. Remove, stir in chili powder and cook 1-2 minutes. Add rest of ingredients and heat to boiling. Pour into a 9 X 13 baking dish. Arrange browned chops over rice and place an onion slice on each chop. Cover with foil and bake at 375 for about an hour or until liquid is absorbed.

Linked up on Tasty Tuesday and on favorite soups at Raising Olives, Smockity Frocks, and The Common Room
Posted by Sarah @ Sarah at SmallWorld at 8:12 AM