My father and third brother took a trip back home to New York this week. My first and fourth brothers live there still, and my nephew just moved up there to my brother's Indian Creek Farm to learn the ropes of Cummins Nursery.

You may recall, if you're a long-time reader, that my parents sold their home in upstate New York (Finger Lakes region) two years ago to move down to Tennessee with the rest of us (my family and my two other brothers and their families). "House" is a post I wrote about it. I happen to love this post. It makes me a little weepy every time I read it, even two years later.

I shouldn't have just read it just now, because last night my father called from Seneca Lake. They were out sailing: my Dad, brothers Peter and Stephen, and nephew Owen. "We're out here on Seneca in the K-boat," my Dad said. "Waited for one storm to pass and now another has hit. We're four wet turkeys in a boat." 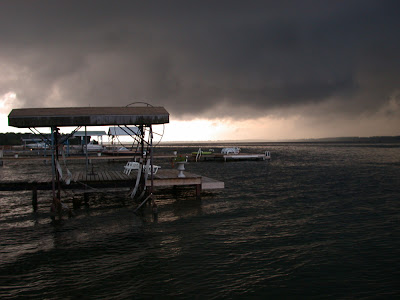 "Out here on Seneca." My father is 86. When I was a little girl, he always had one hand on the rudder and the other on the mainsail. Handling the jib was up to us. Bailing our old leaky boat was my mother's job. Sometimes I curled up under the bow and slept, lulled by the waves and my father's voice. 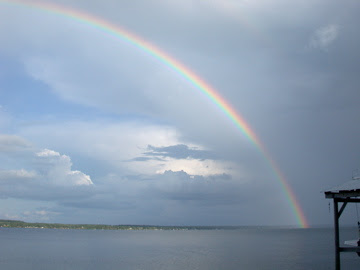 If you grew up in my hometown, you would know Seneca Lake. It's just always there. For some it was always just a drive-by view, a late-night spot, a Saturday afternoon. For others it is alive, transparent with emotion, exquisite in its beauty, frightening with its moods.

I miss it, I do. I miss it so much that I can't think about it for long, can't dwell on the thought of the early morning sun sending diamonds across the waves. Can't think about the big orange moon sitting fat and lazy in the sky.

Can't think about my father, who may or may not have had his oh-so-familiar hand on the rudder during yesterday's sail.

Linked up with Wordless Wednesday, Outdoor Wednesday, and Parenting by Dummies
Posted by Sarah @ Sarah at SmallWorld at 8:01 AM