Or rather, "monthly wrap-up." I am lame at the weekly accounting!

In mid-December, there was our long-awaited trip to the Challenger Learning Center on the campus of UT Chattanooga. We spent 10 weeks of classes—with 24 kids in 5th-8th grades—preparing for this trip. Have I ever mentioned what a challenge it was for me, the writer and lover of all things related to literature, to teach a class about, um, space? Mars? Planets? I learned a lot. Some of it from the kids, in fact. The day of the mission itself arrived chilly and wet. As in pouring-down-rain wet, which is not anyone's favorite weather for driving the 2-hour trip to Chattanooga. All our families were driving down separately or carpooling; my co-teacher Donna arrived 2 hours before our mission in order to have lunch and maybe a little shopping in Chattanooga; I planned to arrive 45 minutes early. Just in case.

Twenty minutes down the road, our 18-year-old, home from college, called. "Um, you locked me out of the house." (He sleeps in the apartment that is attached to the house.) He is unable to break in the house. (I should be happy about that, I know.) Back home to unlock the door and we're on the road again with no time to spare. But that's OK, right? Because Donna, my co-teacher, is already in Chattanooga and can meet our students there in plenty of time. Except that Donna calls as she is just about to the Challenger Center and says, "We just got hit by a school bus."

It all ended up OK, really. We arrived just 8 minutes late. The bus incident wasn't as bad as it sounded—the bus just pulled the bumper of their car. And the mission itself? Outstanding!! Here are just a few photos, all taken by Donna. If you live within a few hours of Chattanooga, I strongly recommend that you look into doing a session at the Challanger Mission center! I'd be happy to provide more details about our class if you send me an email. 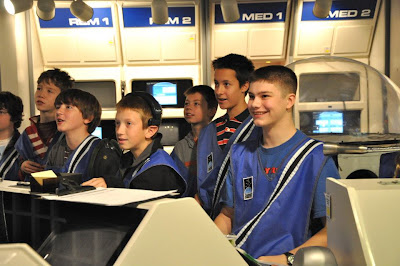 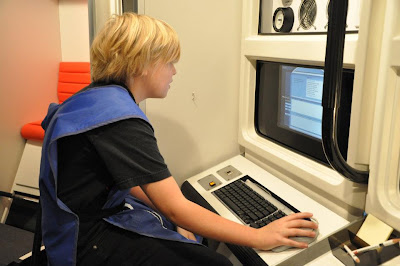 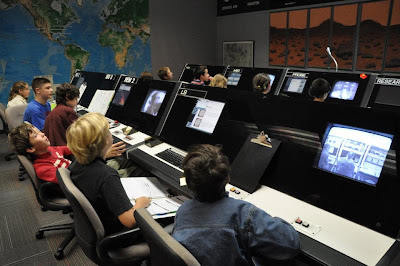 After our big Voyage to Mars, we nestled into the Christmas season. Having Jesse home from college is so awesome. As a friend once expressed when his came home from college, "My collection is all here." They decorated Christmas cookies, a long-standing tradition in our house. Jesse has left behind the "you can decorate without me" teen years and now happily decorates a few cookies: 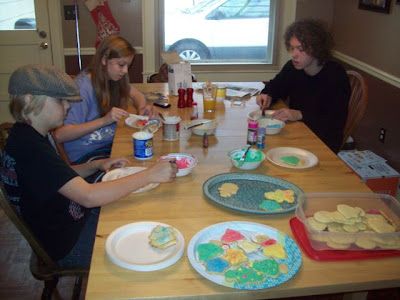 Jesse, Laurel, and one of Laurel's friends prepared their second annual Christmas-break meal for us: 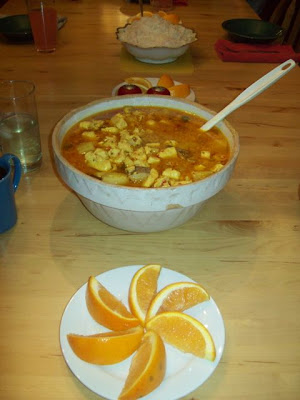 This year's Thai chicken curry was oh-so-much better than last year's pumpkin ravioli! And they did all the clean-up, as well.

A few day after Christmas—which was Duncan's 11th birthday—we traveled to Charlotte for our annual New Year's visit to Randy's family. The weather was fabulous, so we spent one afternoon geocaching through a park. 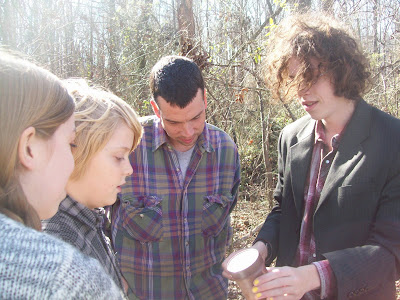 This is our new favorite thing to do on trips or just around town, when we don't have time for a hike in the Smokies. We found the first one fairly easily. The second one was a bit more challenging, and we never found the third one. We hiked around a tortuous bike path in the woods for well over an hour and then searched the spot that the GPS assured us was correct, but to no avail.

But all of our celebrating had a cover of mourning. We had moved my Uncle Max from a facility in Illinois to a nursing home here in Tennessee, where we could be with him daily. But we knew we were losing him. My family, parents, brothers, nieces, nephews all visited him several times a day, and that was a gift to us. He passed away on New Year's Eve.

On January 2 we all headed up to Illinois, 17 of us from here and then one brother from NY and our cousin from Maryland. My Dad, three of my brothers, and our cousin all spoke at Uncle Max's funeral, and it was truly amazing. This is just one of the many displays at his funeral: 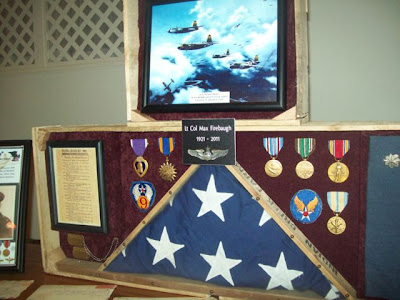 If you read my blog regularly, I've posted several times about our Uncle Max, one of the greatest of the Greatest Generation. I miss him.

In between visiting hours, funeral, and burial, we all packed up Uncle Max's house. You can read a bit about that here on Sifting Through a Life. We also took some time to drive by where my grandparents lived—the house I spent many days during summer vacations of my childhood—and to see the new veterans' memorial in the park across the street. 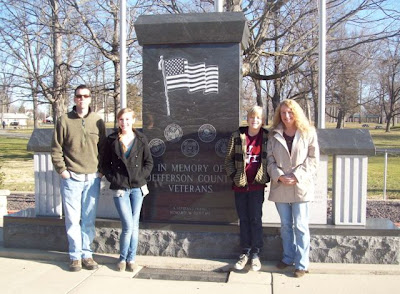 We headed home in time for Laurel's performance in Alice in Wonderland. This was put on by her drama class at our co-op, and it was seriously probably the best high-school performance I have ever seen. And, like most of us, I've seen a lot! I know I am biased, but I was floored. 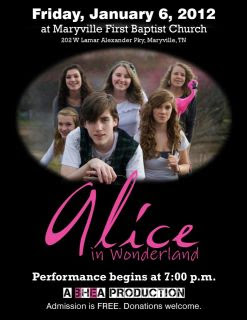 Laurel was a storyteller and thus was on stage for the entire performance with lots of lines. She was fantastic. The flyer above shows Lewis Carroll with all five Alices, which was a brilliant addition to the play.

That was a week ago. We started back with "regular" school on Monday. Co-op began for high schoolers. Laurel is continuing with second semester of physical science, art history, and drama. Her health and computer courses were just one semester, so she has added in a cooking class. Duncan and I are now studying China as part of Sonlight 5, so we did lots of reading. He also watched a few episodes of Wild China on Netflix throughout the week while I did math with Laurel. Of course we continued on with spelling, grammar, math, geography, vocabulary, and all those things.

We had our first day back with American Heritage Girls and Cub Scouts on Thursday, and my British Lit class resumed on Friday. Except for adding in the K-6 co-op on Mondays (which starts January 30) and the kids' Tuesday performing arts co-op (which begins Feb. 1), I guess we are officially back into the swing of things.

Now if I could just get off the computer and get my house cleaned and decluttered....

Linked up with the Weekly Wrap-Up at Weird, Unsocialized Homeschoolers
Posted by Sarah @ Sarah at SmallWorld at 8:55 AM