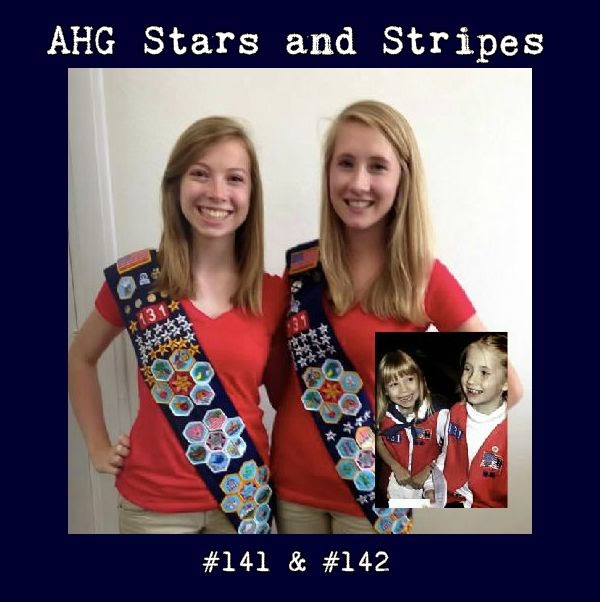 At long last, our American Heritage Girls journey is really over. Well, over for now. Who knows what the future holds? I retired from being co-coordinator of our troop over a year ago (see Saying Goodbye to a Decade of Little Girls), but Laurel still had a final year—her Stars and Stripes year.

Laurel actually received her Stars and Stripes Award back in August. The Stars and Stripes in American Heritage Girls is modeled after the Boy Scouts Eagle Scout Award. It's a long process, starting really several years beforehand with planning when to get which badges, earning those badges, and fulfilling all the other requirements before even beginning the Stars and Stripes project itself. There is a lot of work that goes into the project.

For her Stars and Stripes project, Laurel directed Troop 131 in making blankets, sleepers, cards, and soap packets for Newborns in Need of East TN, an organization that provides newborn necessities for families in difficult circumstances. She and her troop put in a total of 177 hours on this project, which included not only making blankets and sleepers and assembling hygiene packets, but also packaging 2700 diapers and sorting 300 sleepers. In addition, she held collections at three different locations for donations. In total Laurel’s project brought in 200 diapers, 70 bibs, 50 sleepers, 50 packs of wipes, 30 onesies, 25 pairs of socks, and dozens more items to make a difference in the lives of local newborns in need.

She started her project in August 2013 after approval from the AHG national office. Her major work day was on AHG's National Day of Service in September. On this particular day, she had close to 60 volunteers (girls and moms) working on her project for up to six hours. That was a huge day! 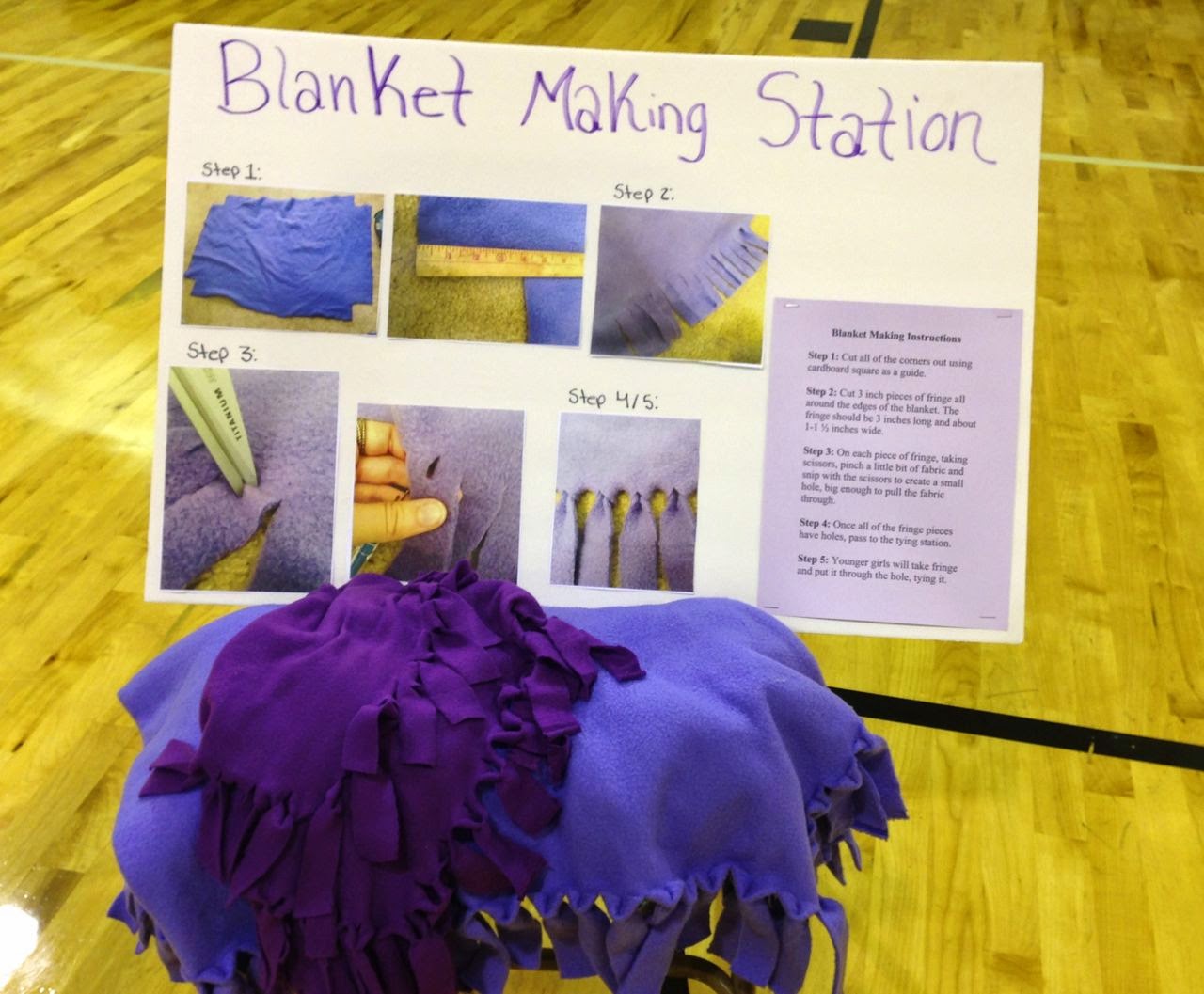 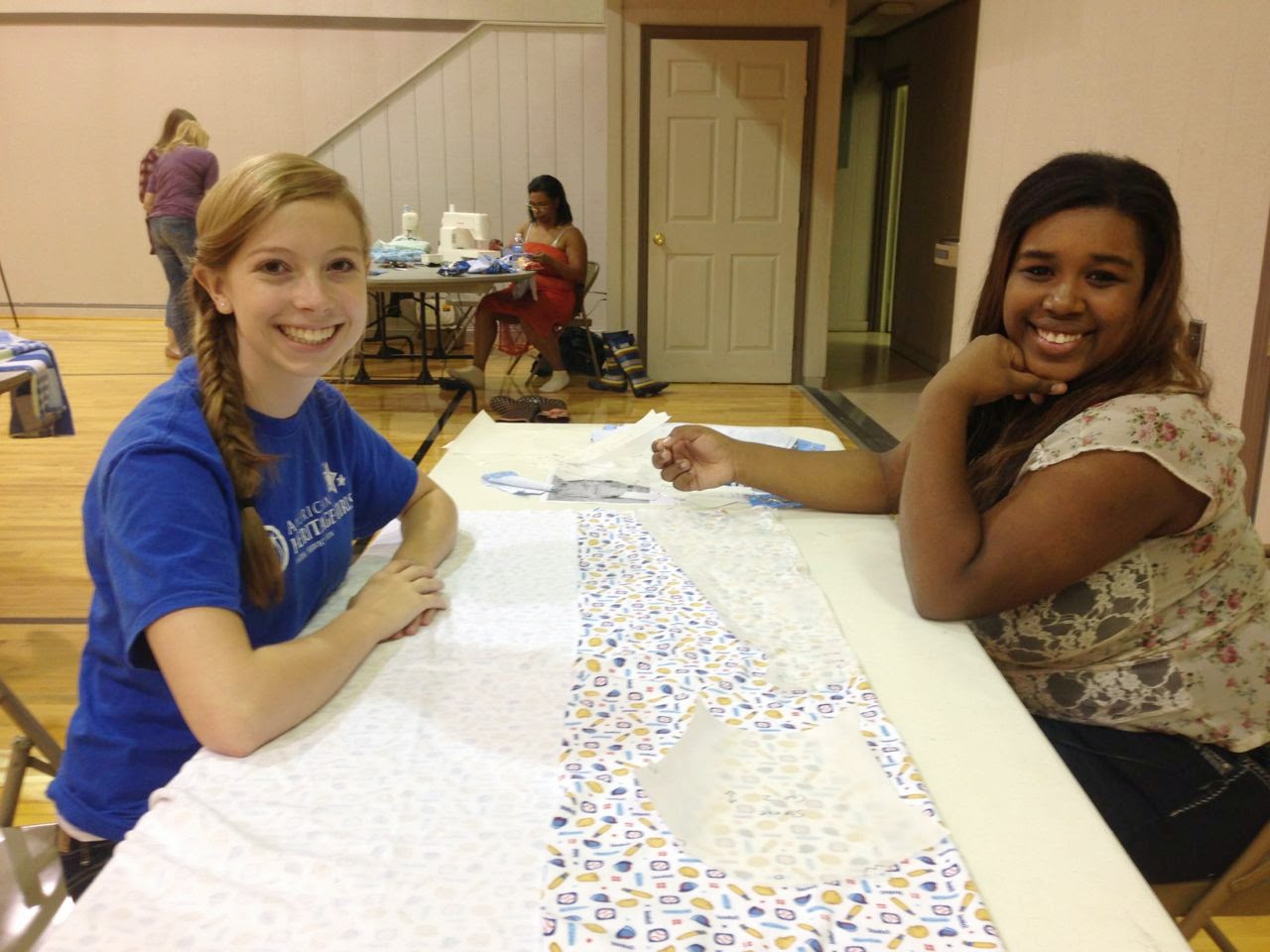 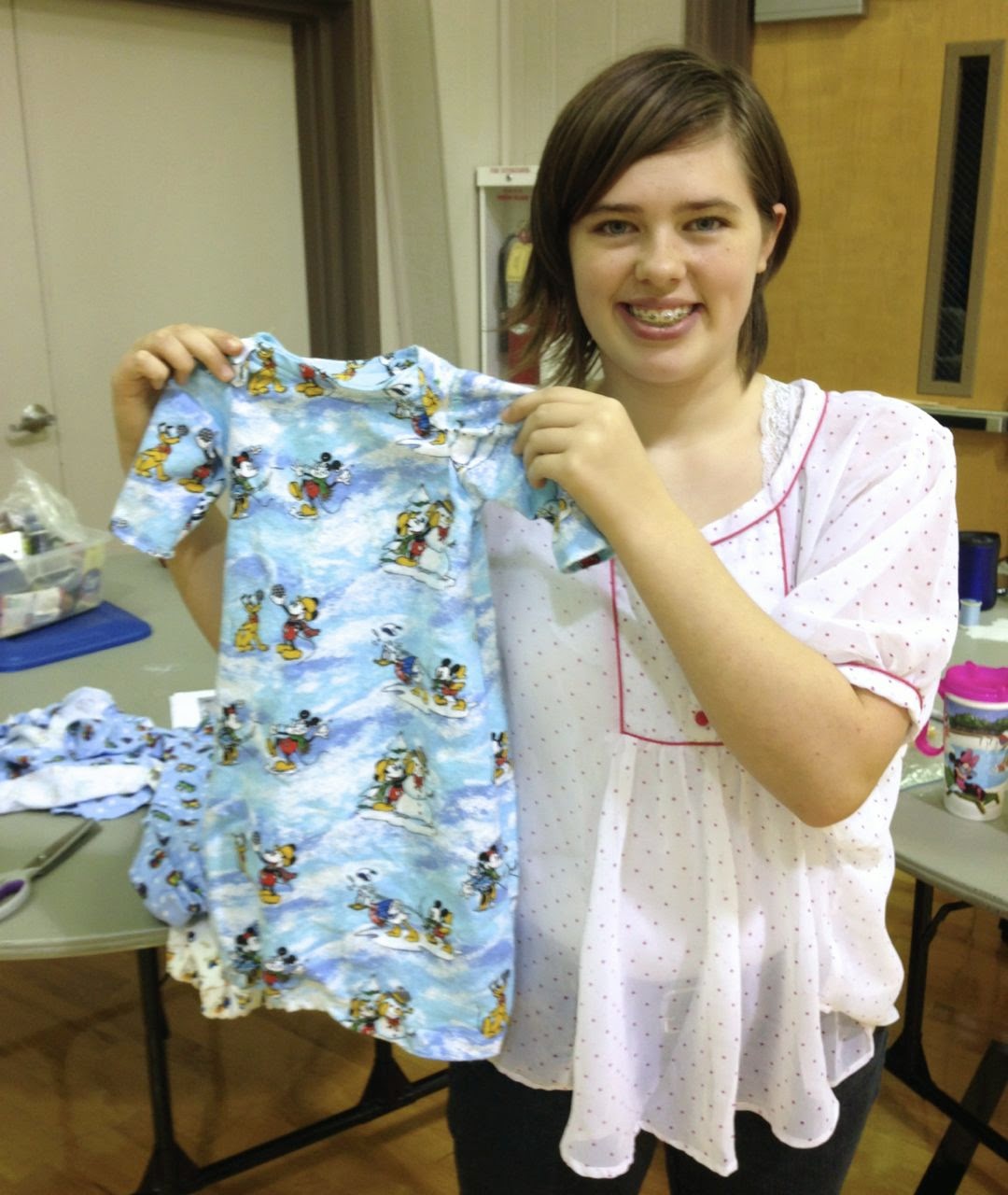 The other two days of her project were much smaller and shorter but necessary to complete the requirements laid out in the Stars and Stripes procedure. These days included sorting items, taking inventory, and packaging diapers.

After the project itself is done, she had to write it all up according to very specific guidelines and assemble it all into a binder—a big, thick binder. That was a long process and perhaps the most frustrating part, but ultimately, organizing her project in writing, collecting references, making out her resume, and writing her spiritual walk essay were excellent learning tools. In July she and her best friend both had their Boards of Review (another excellent experience), and both passed with flying colors. 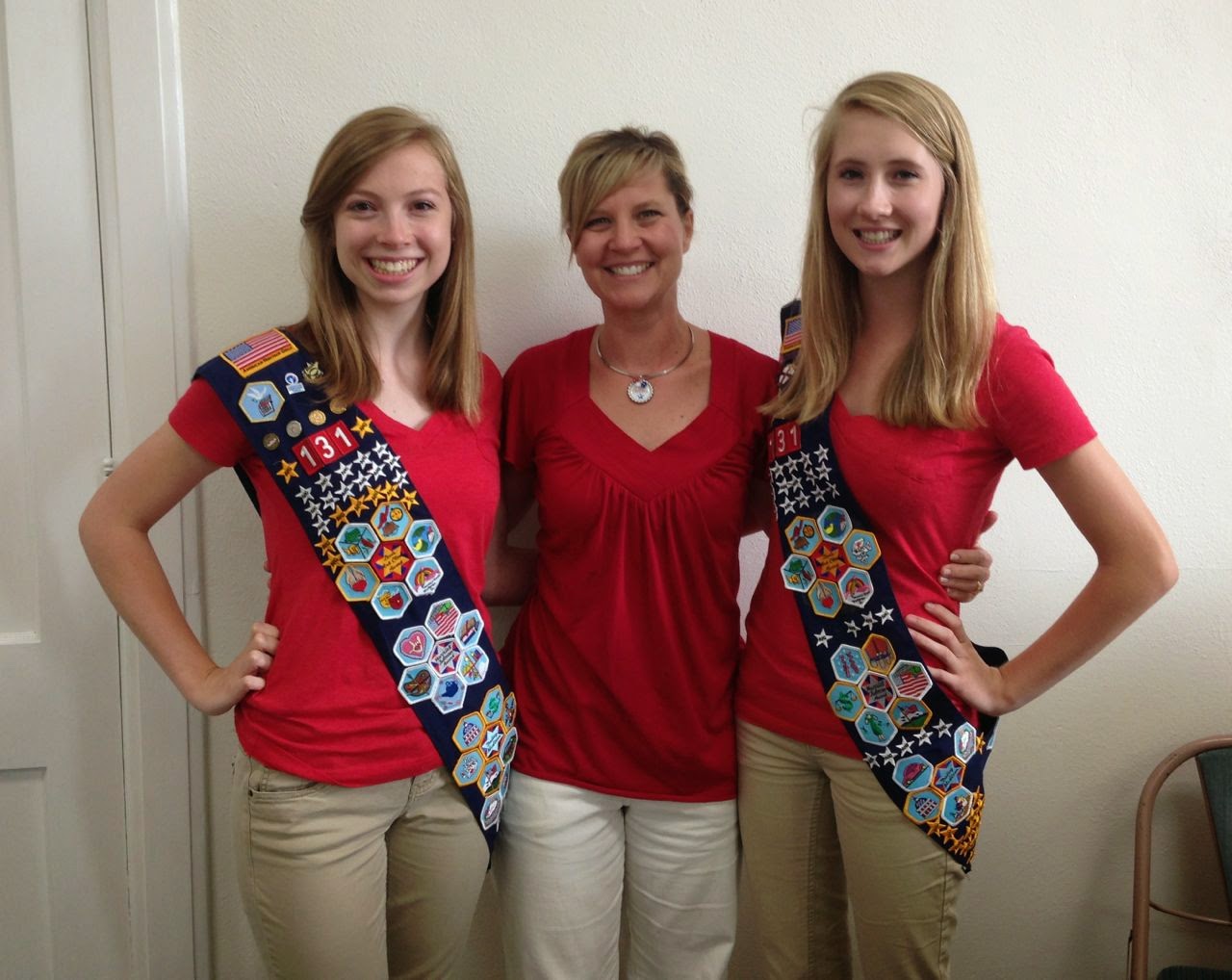 After submitting her final project binder to the Stars and Stripes Board, she could take a few deep breaths and wait for approval, which arrived a few weeks later. 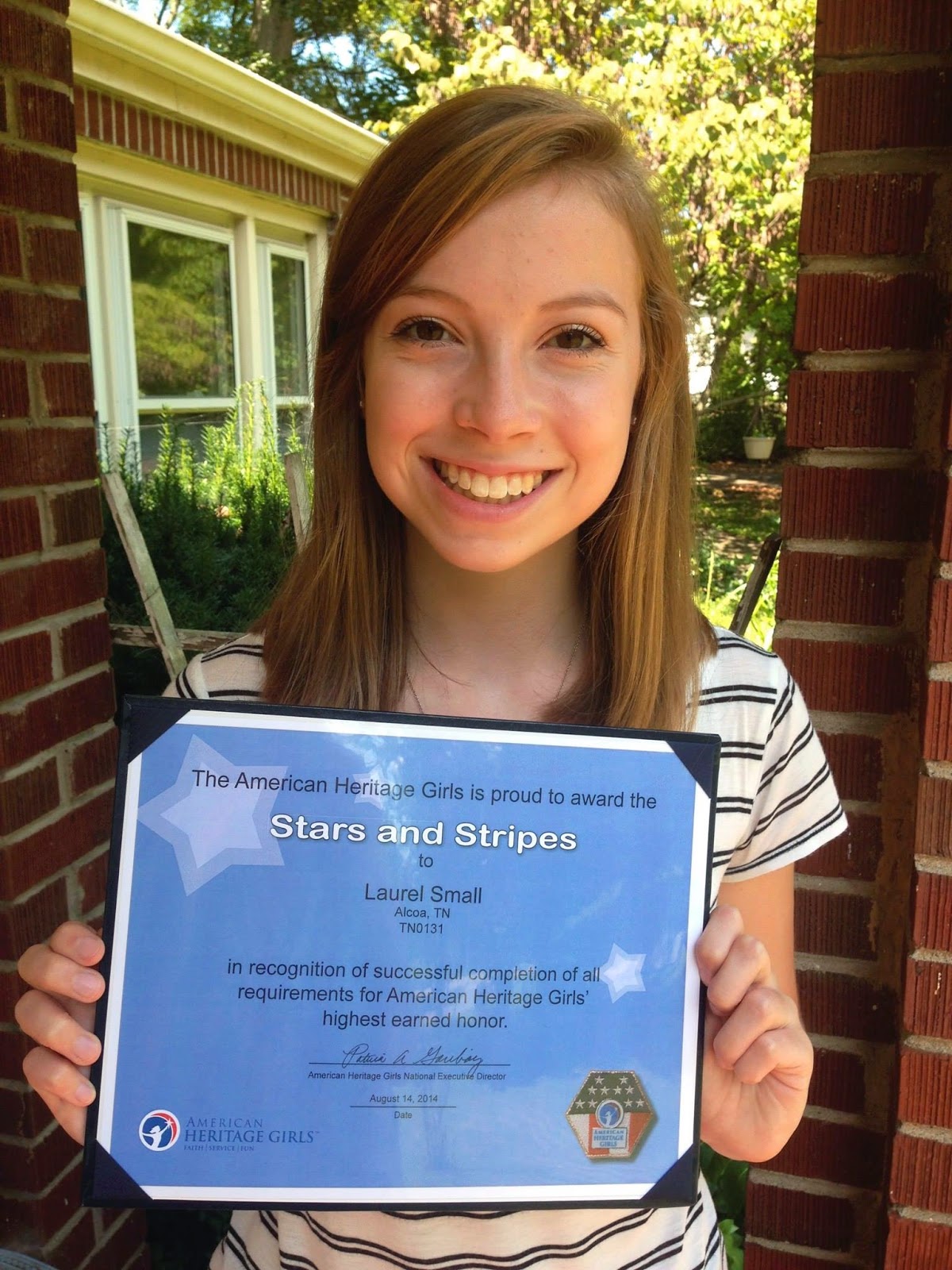 And then came finding time to do her ceremony. We chose the same location where we did our older son's Eagle Scout Ceremony, sent out invitations, and planned the ceremony. Laurel is a  no-frills kind of girl, and she wanted it simple. I modified one of the ceremony scripts that is available on the AHG website.We had around 80 guests there to help celebrate. It was a perfectly beautiful day and a fabulous ceremony.

Two of her best friends were the emcees. The three girls and we three moms started the troop together. Bess and Laurel finished their Stars and Stripes projects at the same time, and Katriel is just completing her project write up. 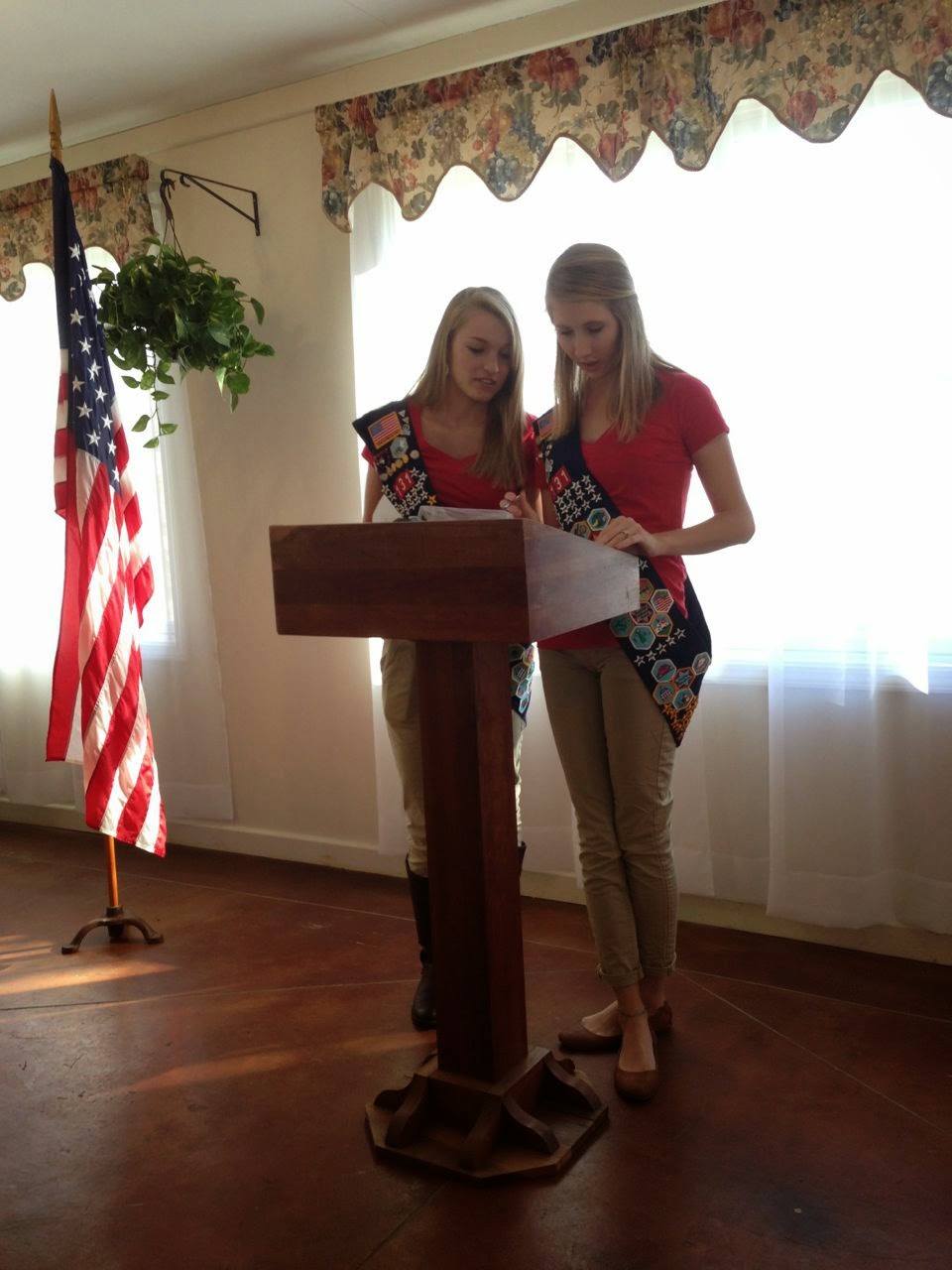 One part that we did add to the ceremony is to give Caroline, my co-founder and co-coordinator for a decade, a mentor's pin. AHG doesn't offer a specific pin for mentors, so we purchased an extra parents' pin.


Because I have an awesome village, I didn't have to make any food. I asked several friends to bring finger foods, and a fellow AHG mom who owns a cake business made the fabulous cake. 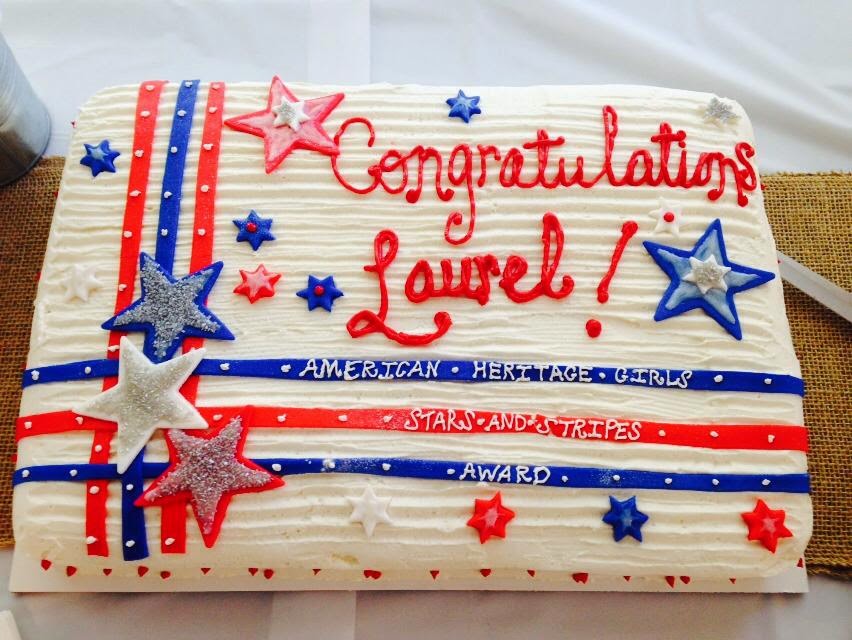 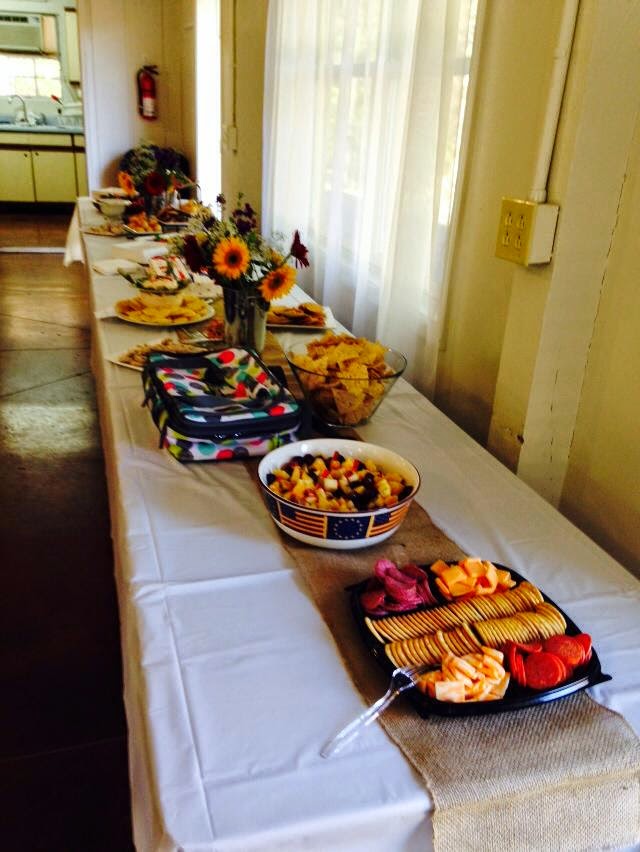 Her display table was simple: we made a project display board, had her Tenderheart and Explorer vests, a scrapbook, a few pictures. 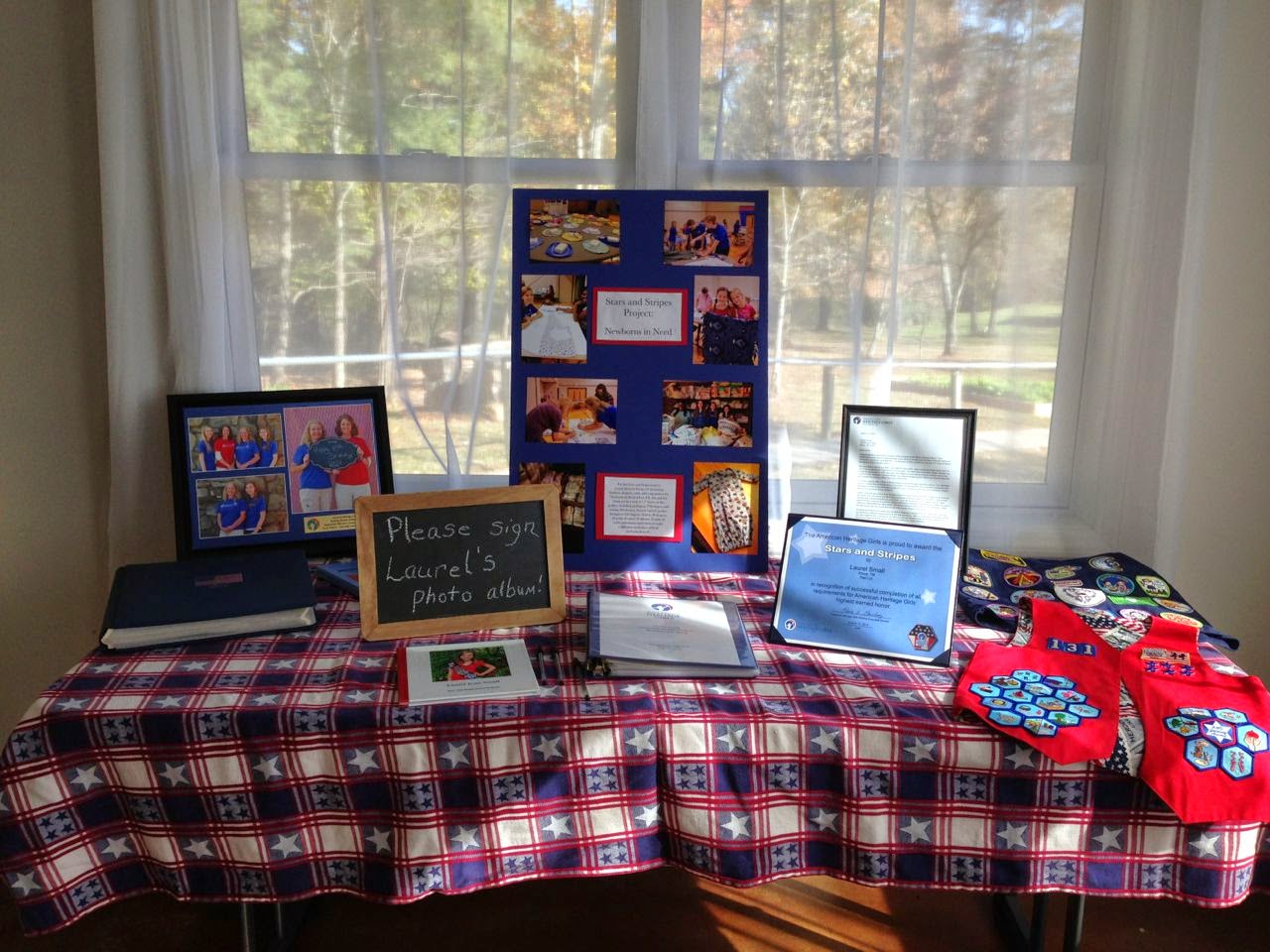 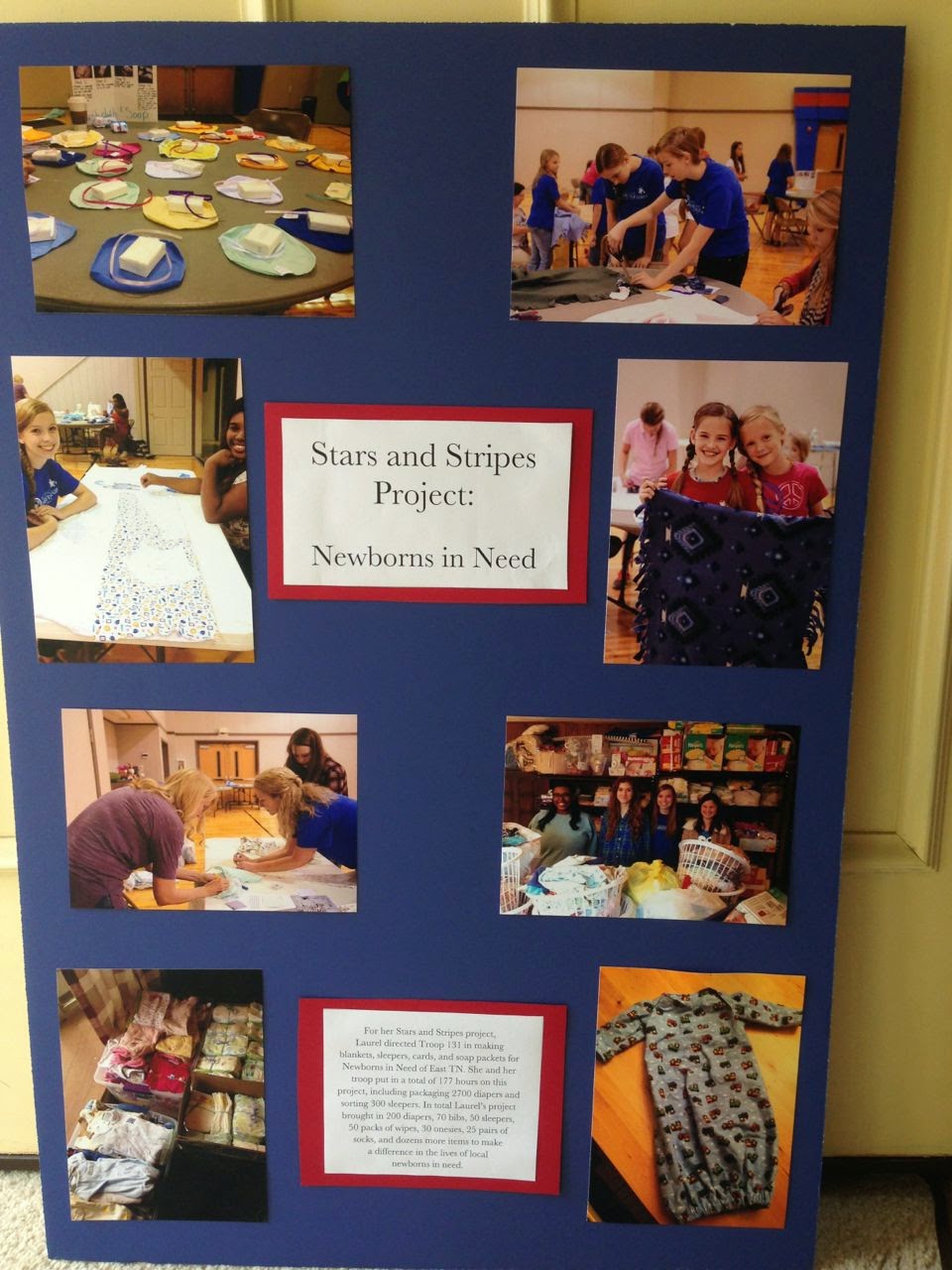 For a guest book, I had made a photo album, with pictures from her very first year to her S&S award and everything in between, on Shutterfly that we asked people to sign. 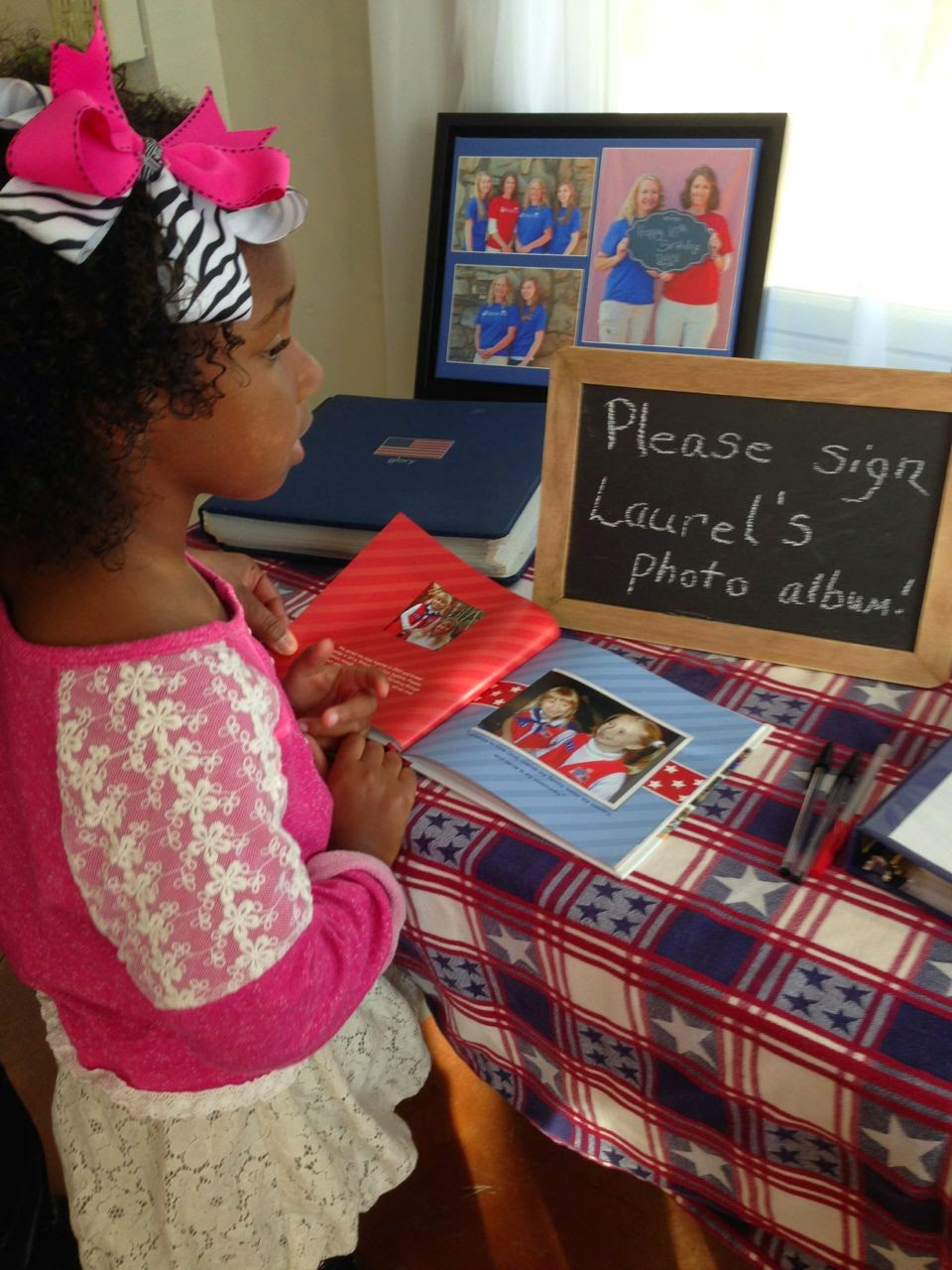 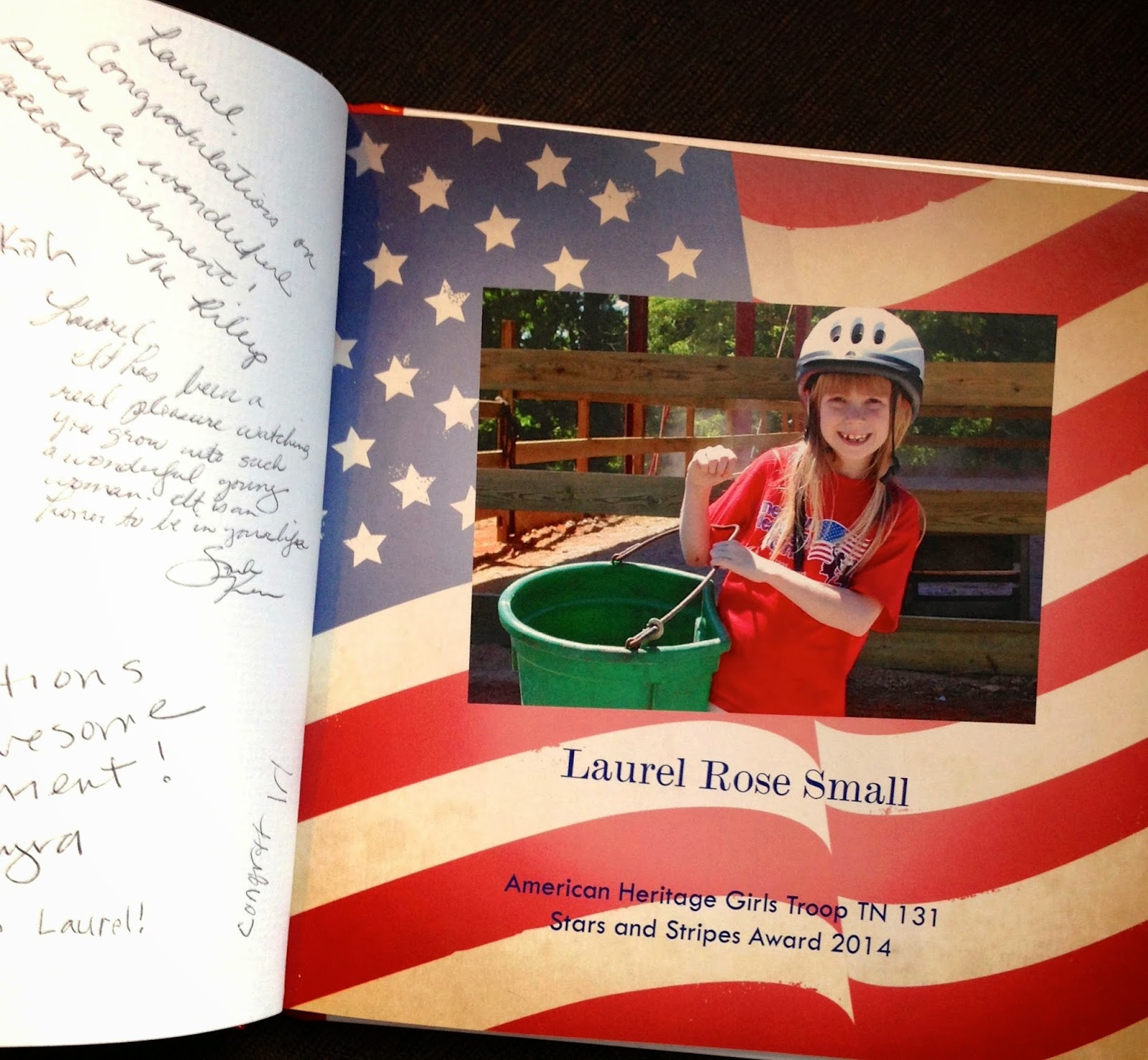 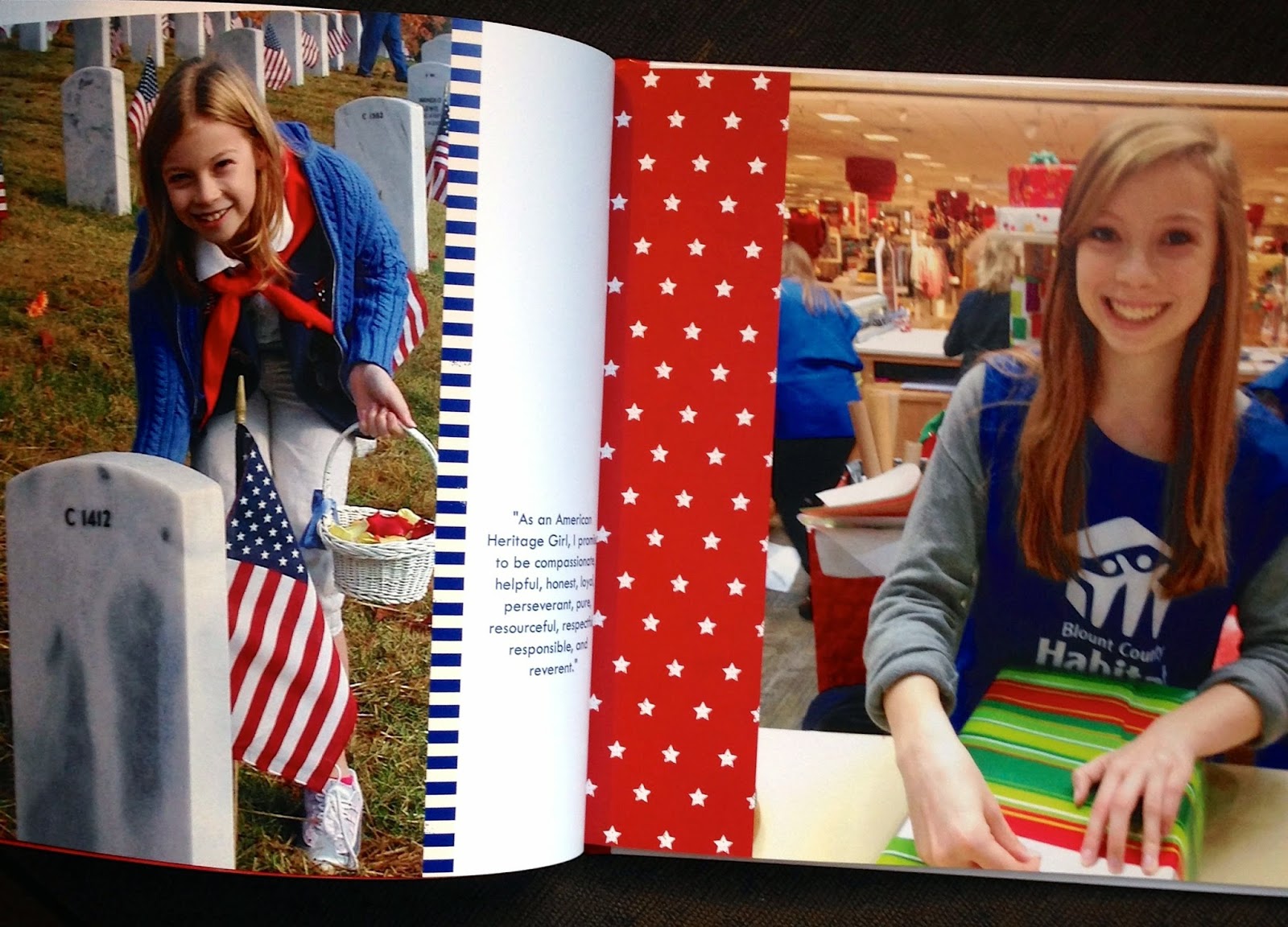 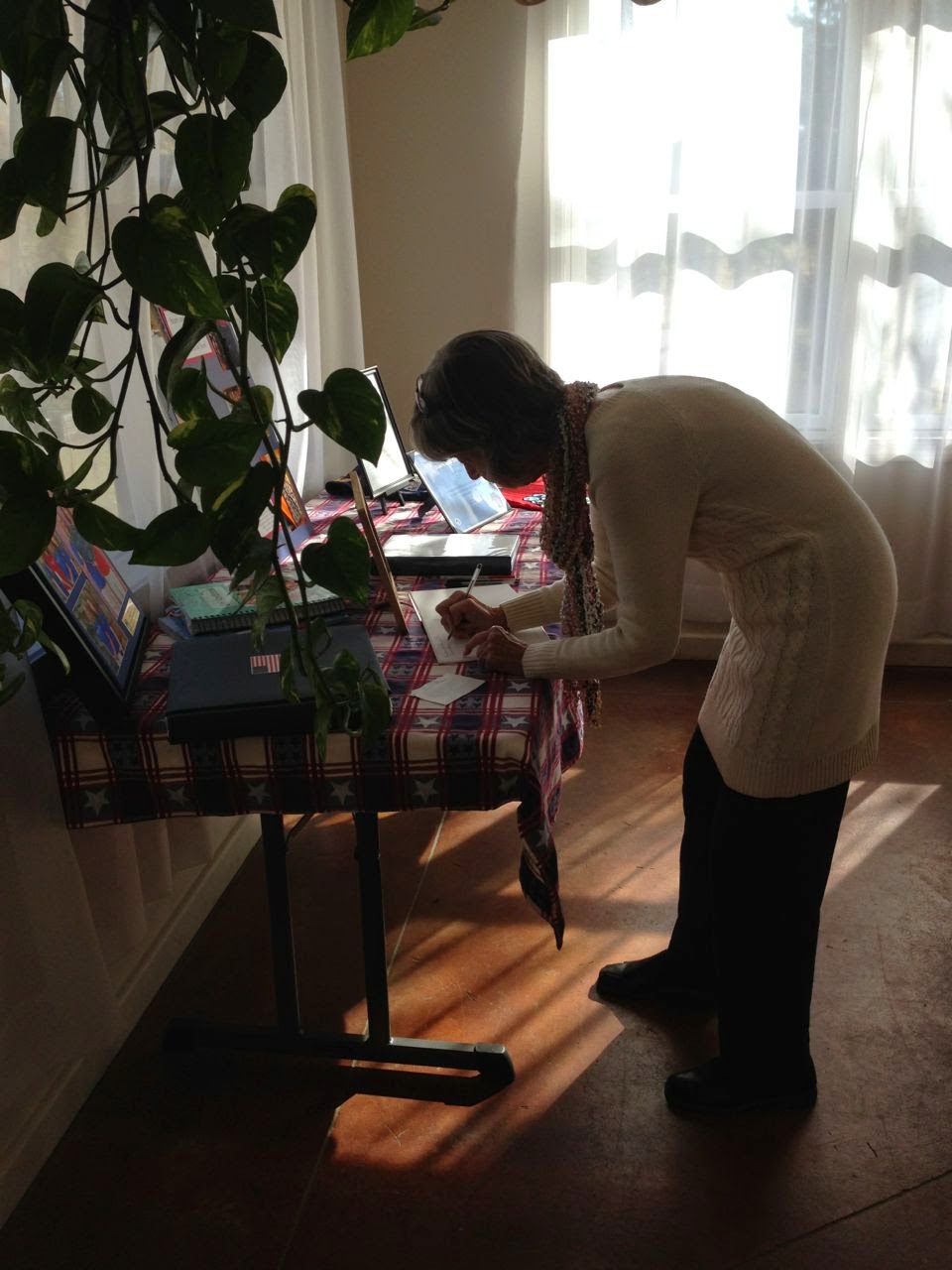 And finally, the end. Here she is with a few of the girls who did her flag ceremony. 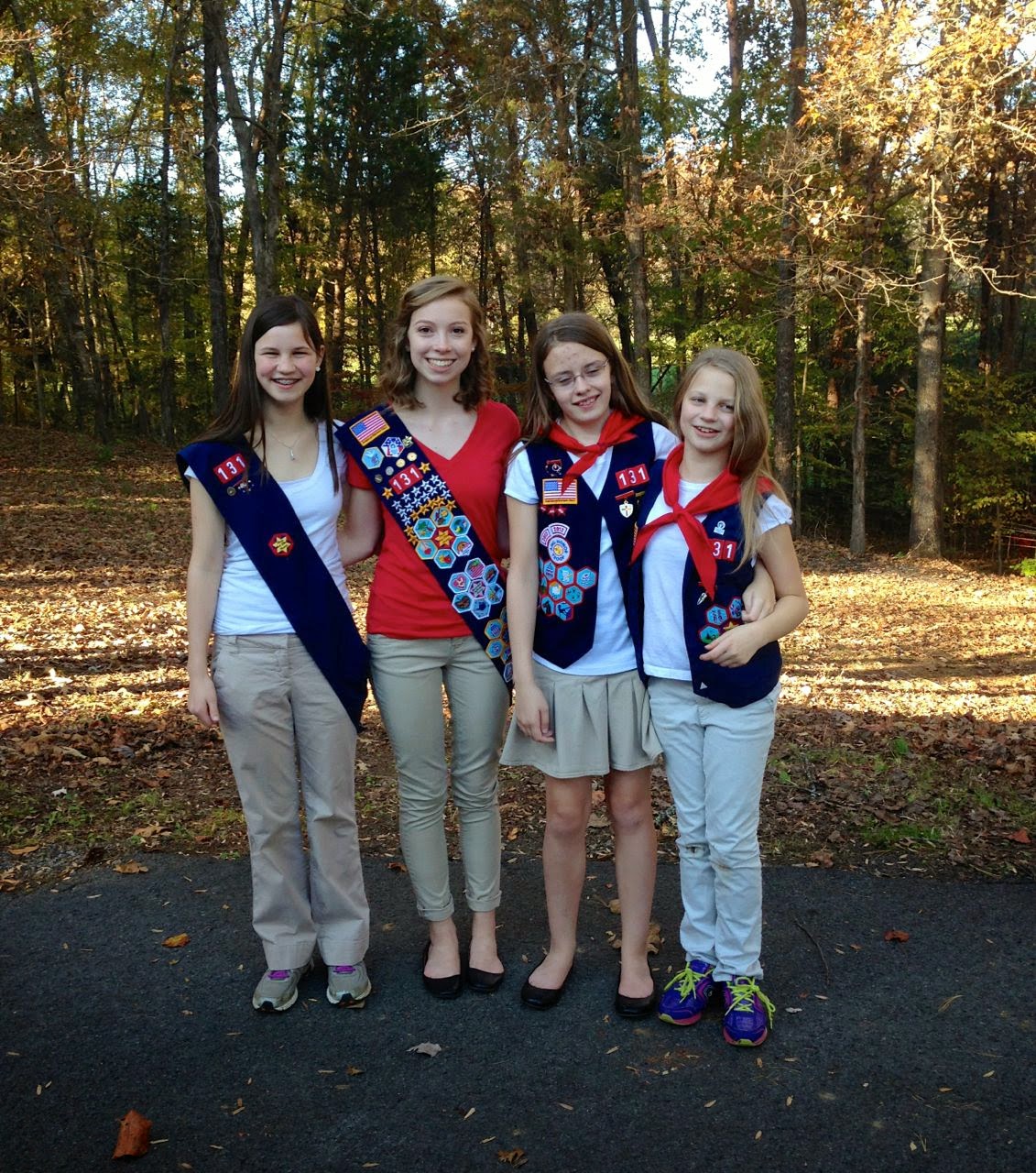 And here she is, done and ready to go home. 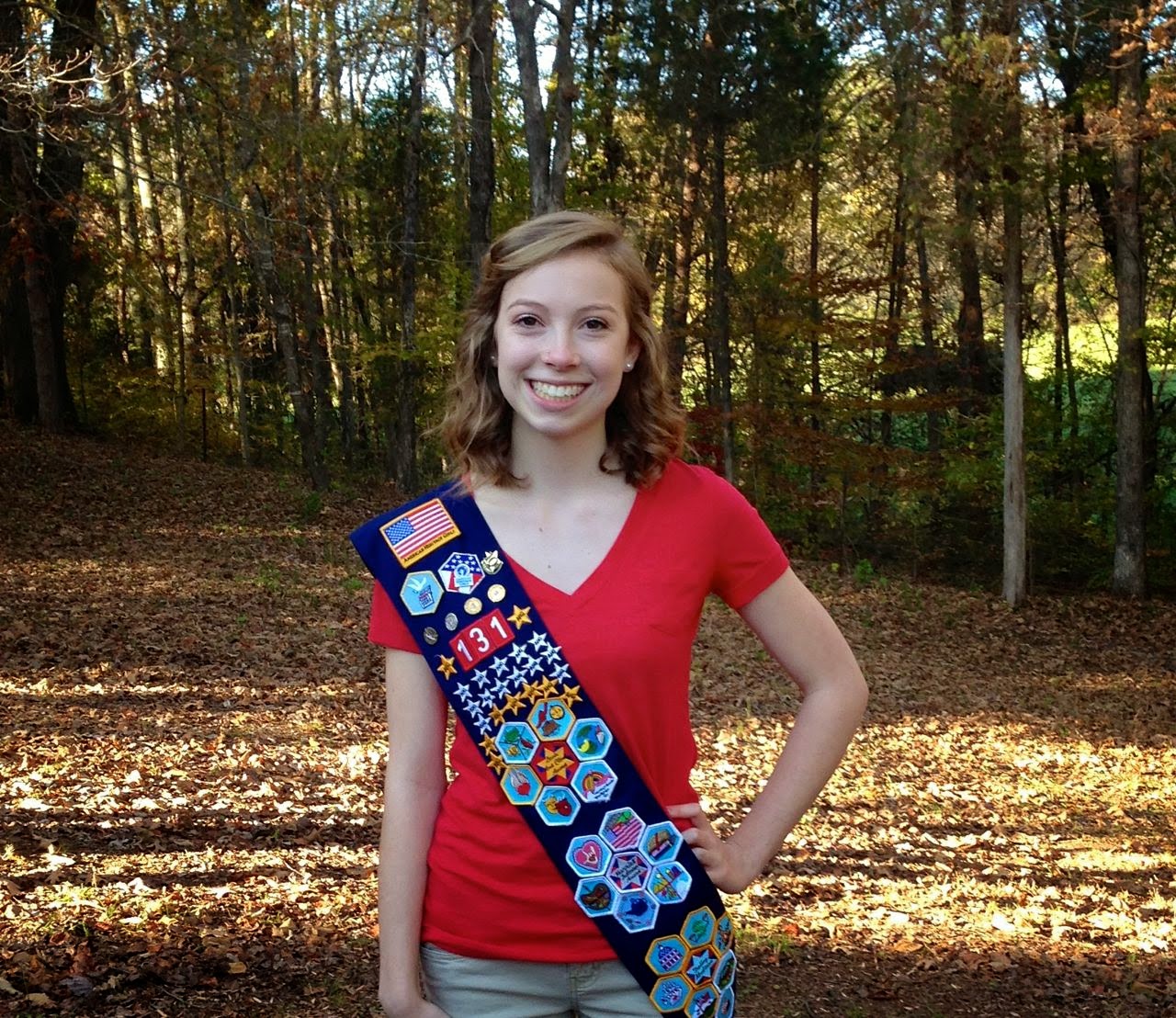 I'm so proud of her, the 141st recipient of the American Heritage Girls Stars and Stripes Award, and the 5th member of  TN 131 to receive the award.

Well done, sweet girl. I have been so incredibly blessed by all these years with my daughter in this organization.

Thanks, American Heritage Girls, for helping us lead little girls into women of integrity.