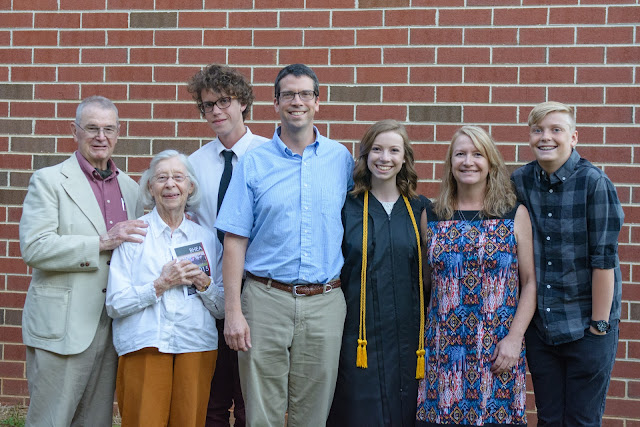 Merry Christmas from our family to yours! Here is our Christmas letter, which I wrote after I sent out 1/4 of the cards without it. {Sorry if you were among that first quarter and received a letterless card!}


It’s December again, and this year Duncan’s riding his skateboard barefoot in shorts and a T-shirt, and we’re hoping the daffodils don’t come too much further out. I think we’ll see the Smokies capped in snow yet, though.

2015 was another year of changes for the Smalls. Laurel graduated from high school, went to college, and turned 18. Putting all those major events into one small sentence seems inadequate. In a family that homeschools, graduating a child is especially exhilarating—and life-changing. Graduation brought all kinds of festivities for Laurel, including a trip to New York City with her boyfriend and a trip to Hilton Head with her girlfriends. {I got to go on both the trips, too.} After a summer of relaxation and preparation, Laurel headed to Lipscomb University in Nashville and then turned 18 a couple weeks later. She loves it there—loves the college, loves her suitemates, loves Nashville. We miss her, but we revel in her happiness.

Jesse, 22, lives across town and is still working for US Air while figuring out what to do with the rest of his life. He’s been volunteering as an ESL teacher to adult students for several months, and right now he’s weighing teaching overseas vs. going to graduate school. We’re all staying tuned. In the meantime, we can expect a weekly text from him asking, “Dinner tonight?”

That leaves Duncan, who is enjoying having his parents, all snack food, and the entire house to himself. Duncan is full of adventure, Doritos, and, as always, candy. This summer he and Randy and over a dozen others from their Scout troop went to Philmont Scout Ranch in New Mexico, where they backpacked over 80 miles and had 10 days of amazing adventures. Duncan will turn 15 on Christmas Day, and he’s hoping to get his driver’s permit as soon as possible. We think studying the book might be helpful, but he’s pretty sure he can just go in and take it.

Speaking of driving, Dad, at 90, still is. He’s also still experimenting with apple trees, maintaining a prolific garden, and making daily trips to the supermarket. Oh, and he and Mom flew to Ithaca (NY) in June to meet their 11th grandchild, Maxwell, born to Stephen, Jen, and Kollman. Dad and I also had an amazing opportunity in October to fly to Washington, DC as part of HonorAir Knoxville, which takes veterans of WWII and the Korean and Vietnam wars to see the memorials built in their honor. Spending the day in DC with my Dad and 125 veterans was a truly humbling, exhilarating, and unforgettable experience.

Other experiences have not been quite so exhilarating this year. Randy’s mother’s husband, Ben, had a stroke in June. The next many months brought a steady procession of hospitals, nursing homes, and copious paperwork that kept Randy and his mom, Pat, mired in stress. Ben’s health continued to decline, and he passed away in November. They are still working signing forms and sorting paperwork, but Pat is doing well and breathing a little more freely now, as are we. Christmas break comes perhaps more needed than ever this year.

On a brighter side, Randy made full professor this year, so he’s now Dr. Dr. Dr. Small. He also became Scoutmaster of Duncan’s Boy Scout troop in the fall, so he’s swept up in either filling young minds with biology or with adventures. Either way, he’s pretty great. And while he’s doing all that, I’m teaching four high school classes at our homeschooling co-op program, helping Duncan navigate his high school classes, and sending care packages to Laurel. Also, I really like yoga.

With Laurel and Jesse gone, we have way more rooms in our house than people now. We like visitors. Merry Christmas and a happy 2016. Thank you for being part of our lives.