I didn't intend for this to be a week of spring break, but somehow that's exactly what happened. On Monday our co-op was on spring break, and I foolishly had scheduled an orthodontist appointment for Laurel for that afternoon. It made sense at the time. Randy and Duncan are the smart ones: they went hiking at Ijams Nature Center. 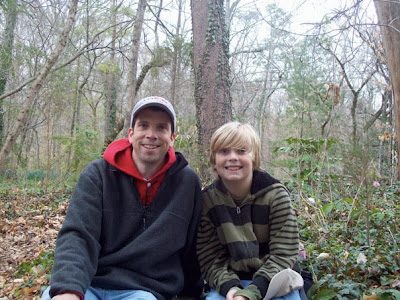 It was a dreary day, but they had a great time anyway. Lots of wildflowers are just peeping out, like these pretty little bloodroots: 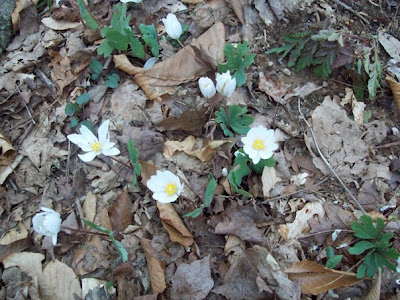 This was a very educational day for Duncan. Here he is getting an invasive species lesson from his Dad; those are seed pods from the terribly invasive Empress Tree (Paulownia). 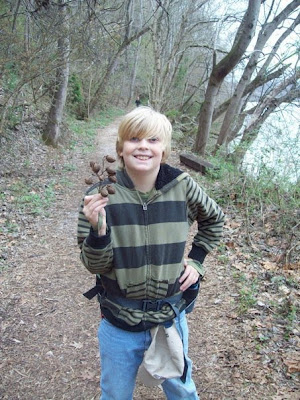 On Wednesday, Randy cashed in one of his Smokies shuttle tickets that I had given him for his birthday, so Duncan and I met him at Tremont, left his car there, and then drove to Elkmont. Randy's goal was to hike from Elkmont to Tremont. We hiked with him up to the Avent Cabin. 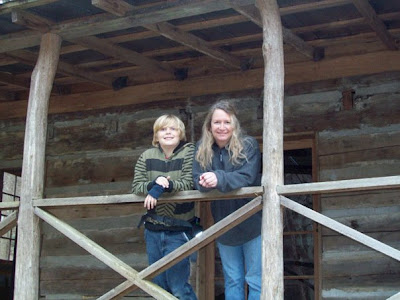 I loved this cabin. It has a great story behind it, as most of the cabins do. This particular one was used as a studio by the artist Mayna Avent in the early-to-mid 1900s. If I could have a quiet cabin like this, I could write wonders. Here's background information on the cabin and how to get there, in case any locals are interested. It's a short hike--just a little over a mile--to the cabin from the new Elkmont parking lot. 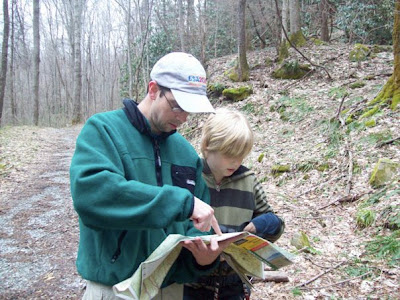 Randy's always so good about showing Duncan exactly where we are in the Smokies and where we're going. At age 10, Duncan is determined to be either a park ranger or a botanist. 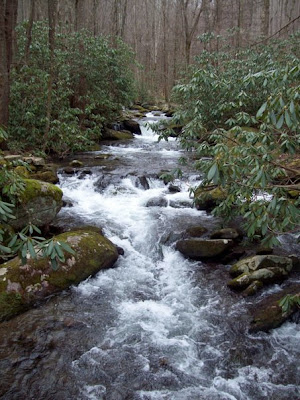 The park was alive with spring, river rushing with plenty of rain and flowers just about to pop out everywhere. We saw a few little yellow violets and lots of daffodils (homesteaders always planted daffodils). 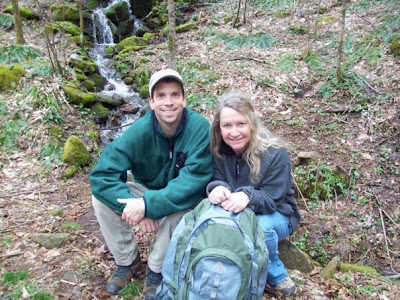 We left Randy after our short hike to the Avent Cabin and drove back to town. He hiked the 10 miles to Tremont. You can read all about that hike on his blog and see lots more pictures. He's now finished 25% of his goal to hike all 850-900 miles of trails in the Smokies!

Today Laurel and I joined the teens within our support group to do a service project. Second Harvest Food Bank of East TN was flooded a couple of weeks ago and much of their food was tainted and supplies damaged. We took about 15 teens to work putting labels on cans of beans. They labeled something like 4000 cans of beans in just a few hours. 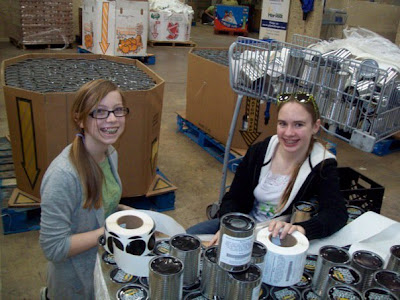 We may not have done a lick of math or grammar, but we had a fantastic week spending time with Randy, enjoying spring, and serving.

Tomorrow Randy and I head out for our annual anniversary trip, back to the Smokies to a very, very quiet cabin. With a hot tub. Enough said.

Linked up on Weekly Wrap-Up and Amy's Finer Things Fridays

Posted by Sarah @ Sarah at SmallWorld at 7:08 PM