Worth talking about these past two weeks:

* We watched the BBC production of The Silver Chair, having finished the book a week or so ago. We generally agreed that while the latest Narnia movie, The Voyage of the Dawn Treader, had great special effects, we prefer the no frills version that sticks with the book. We liked the BBC version. It was cheesy in parts, but we're okay with that.

* I blogged about "Watching Geography." This week we watched an IMAX movie about sea life and another about storm chasers. The latter one made me fall asleep. Next week we're starting on National Geographic movies.

* Laurel has decided to add SAT practice to her grammar studies. She loves doing the verbal components to the SAT, and I'm sure not going to discourage her. I have a bunch of guides that I found in the free bin at McKays Used Books, so she's having fun with those.

* One week was largely devoted to American Heritage Girls. Our 7th-12th grade girls put on a tremendous Father/Daughter Valentine's banquet each year. Between Bible study; regular AHG meeting; preparing for, enjoying and cleaning up after the banquet; and selling Valentine's chocolates as a fundraiser, Laurel and I spent about 20 hours in AHG mode that week. Duncan spent some time with my parents, some with friends, and some of that in Cub Scouts. It was crazy. But she and about 65 other girls had a wonder time with their daddies: 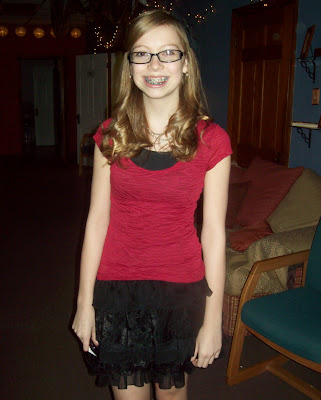 * Duncan's duct tape wallet business is booming. He can't even keep up with all his orders. 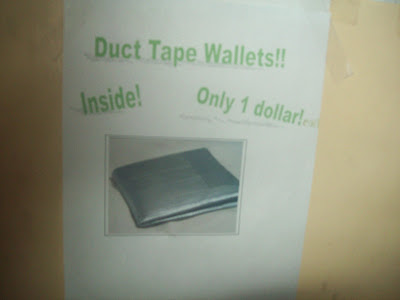 He's doing a great job saving all his money, but he's itching to buy something.

* I wrote a post on Simple Homeschool called Burying the Big Yellow Bus. If you don't subscribe to Simple Homeschool and you're a homeschooler, you really should. Browse back through January for the Day in the Life series. Great stuff!

* And finally, I turned 45. Birthdays are, of course, holidays around here. And tomorrow is President's Day, another holiday, which makes me so happy. We have a break from co-op classes, which means I didn't have to spend Sunday doing lesson plans.

Linked up at the Weekly Wrap Up
Posted by Sarah @ Sarah at SmallWorld at 9:16 PM