Some days we spend reading, writing, multiplying, dividing, converting, measuring, drawing, listening, experimenting, building. On other days we simply embrace the gift of time spent with friends and family.

I love flexibility. This week started with a huge party at a camp down in the foothills. We didn't have co-op classes Monday because of Presidents' Day, so that made a perfect get-together day. One of Duncan's friend's was celebrating his birthday, and he invited everyone in our support group to come help him celebrate! Fortunately for his parents, "only" about 50-60 people showed up. They had a marvelous time climbing up and down hillsides and playing in the creek for a few hours, while we moms had a chance just to chat. That's called bliss, all around. 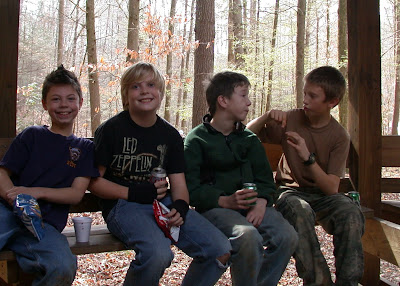 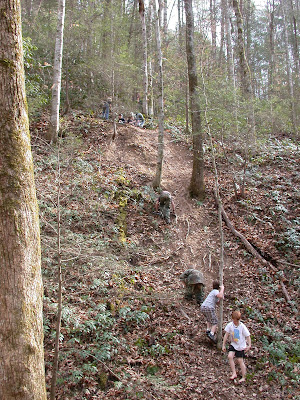 Tuesday, Wednesday, and Thursday were regular kind of days. This was Scouting Thursday, and we've been working on the sign language badge in our American Heritage Girls troop. The college in our city has a deaf studies and ASL major, so we've been blessed to have students from the program come and teach the girls sign language. This week a young deaf woman came to speak to the girls through an interpreter about her life as a deaf person. She was fabulous, and we all learned so much.

Today I fully intended to do all kinds of book work, but my parents needed us to come over and help them. 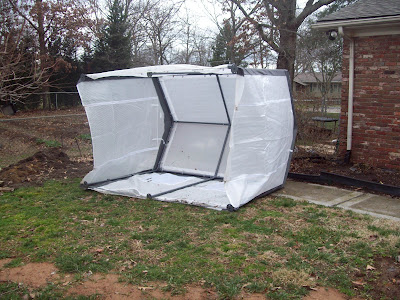 The high winds last night had blown their greenhouse clear across the yard, so Duncan and I helped Dad get it back in its spot and tie it down. 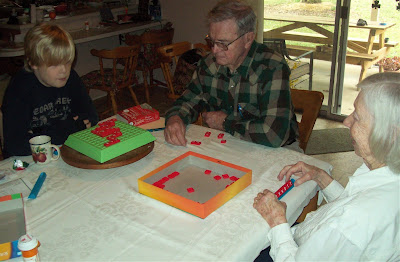 Afterwards we played a game of Upwords with Mom and Dad. Duncan was looking a word up in the dictionary, which triggered a memory for Dad about the Great Depression. Dad was telling us that when he was a boy, his one-room school received an amazing gift from the state: a dictionary. He read through the entire dictionary, and then a couple of years later, his school received a whole set of Compton's Encyclopedia. He couldn't believe how fortunate they were to get such a treasure! Of course he read through all of those, too. And in sixth grade, the state bestowed upon his little school the gift of 50 fiction books.

My mom then jumped in to tell Duncan about how she and three other kids were picked to go directly into 2nd grade (there wasn't any kindergarten back then), skipping first grade, because the first grade was too crowded. So the summer before school started, her mother gave mom and her three friends a crash course in first grade so that they wouldn't be behind as they began 2nd grade. Mom ended up skipping ahead a grade or two anyway later on. Mom also told us about how so many families were suffering from the Depression and didn't have food, so her mother started making giant pots of soup for all the kids to eat. They figured years later that this must have been one of the first school lunch programs.

Now that's a history lesson, and a morning well spent.

Linked up on the Weekly Wrap-Up at Weird, Unsocialized Homeschoolers
Posted by Sarah @ Sarah at SmallWorld at 4:26 PM