I wish the Barry Manilow song "Weekend in New England" didn't flutter through my head every time I think things like, "We had a great weekend in…______" In this case, we had a great weekend in Cades Cove. (And, as an aside, I played "Weekend in New England" for a piano recital when I was about 13.) In case you have no idea what I'm talking about, here it is:

I know. It's amazing.

Anyway, this Cades Cove weekend was superb. We don't usually like to camp in Cades Cove because it is the most popular camping spot in the Smokies. However, we have been wanting to ride our bikes around the loop forever. We finally have everyone in our family riding confidently with good bikes, so we made campground reservations with friends a few weeks ago, filled up our tires, and pitched our tents.

On Wednesday and Saturday, the 11-mile loop around Cades Cove is closed to auto traffic until 10 a.m. We have driven around the loop dozens of times in our 11 years here, and it is beautiful. But to be on bicycle (and sometimes foot when walking up endless hills) was a totally different experience. I was elated. Ecstatic. To see the early morning sun break through the mist and the familiar mountains appear beneath the fog: what a gift. 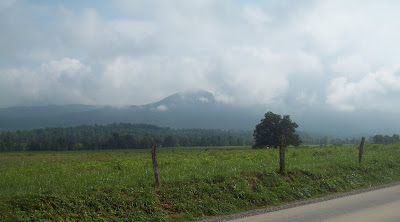 The kids did great. Randy was a little concerned that Duncan would have trouble making it, but it was a piece of cake for him. 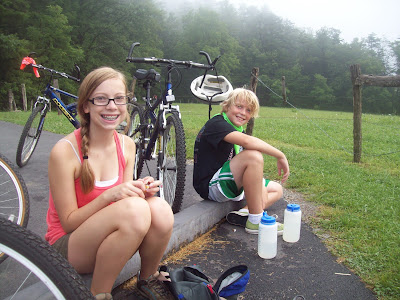 Really, he was pretty tuckered out at the end, but within 20 minutes after finishing he was back on his bike, riding around camp. 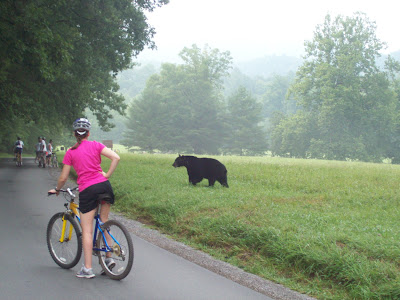 We saw all kinds of wildlife, including this bear. The ranger stopped traffic, held out his hand, and said, "Bear needs to cross. Stay back." The bear crossed the road, lumbered into the woods, and was gone. Later we saw a mama and three cubs. 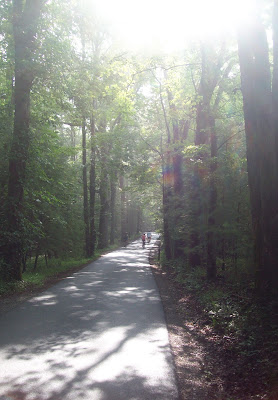 The loop is "only" 11 miles, which sounds fast and easy. But this is in the mountains, after all, so flat is rarely an option. We took it slow and easy with lots of breaks and even a little shopping at the gift center and finished in around 2 hours. 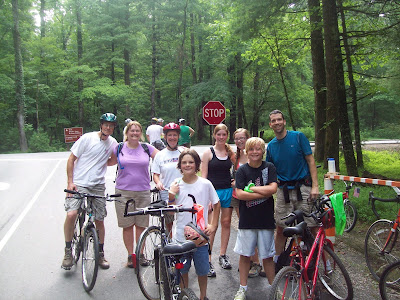 In case you can't tell from the picture, we are all feeling immensely proud of ourselves after completing the loop. 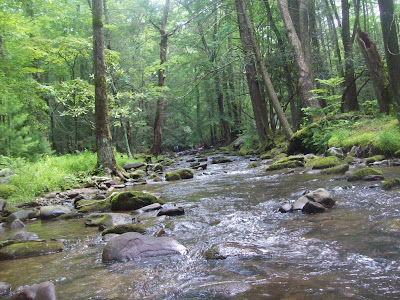 We rewarded ourselves with a relaxing hour or two in the river, cooling off and basking in our achievement. 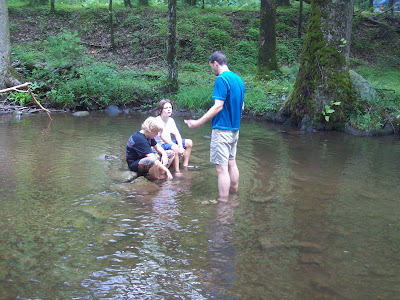 Ever the educator, Randy gave the boys (Duncan and his friend Emery) a lesson on water life. He saw a golden opportunity for them to earn their Naturalist pin for Webelos. 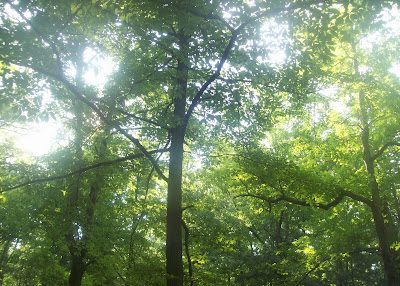 After spending the afternoon lazing around the campsite, staring up at the trees, eating Hobo meals, and wondering how the boys could still be riding their bikes around, we got the brilliant idea to get in the pick-up truck and drive around Cades Cove to watch the sunset. 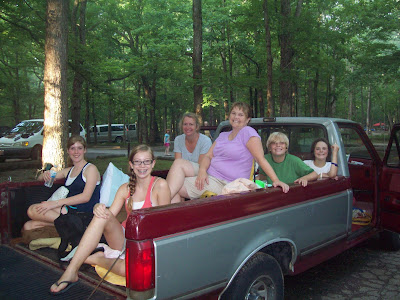 Yes, Diane and I are actually sitting on camping chair is the back of a pick up. All we need is a rebel flag. I mean, I'm not stereotyping or anything, but. 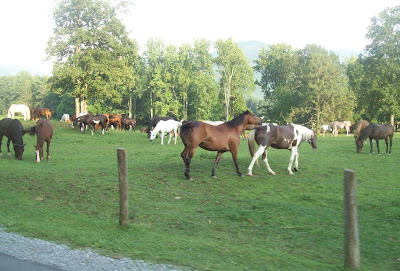 It was exactly the right thing to do. The horses, freed from their day jobs of providing humans with entertainment, were free. The deer were positively gamboling, and the mama bear and her three cubs were playing a game of tag. 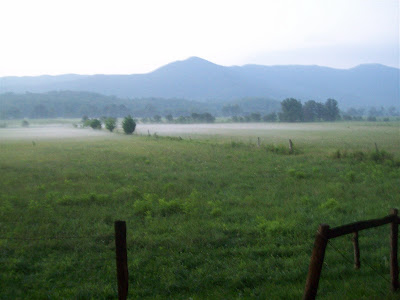 The mist settled over the meadow, bringing a quiet end to the busy day for this well-traveled bit of creation. 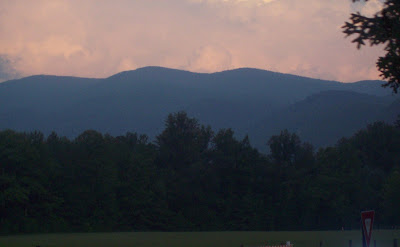 The sun set, and we headed back to roast marshmallows, eager to crawl into our tents but reluctant to give up on a perfect day.

Linked up with Amy's Finer Things Friday
Posted by Sarah @ Sarah at SmallWorld at 7:33 PM