I spent this past weekend in a delicious mixture of sharing memories and catching up with long-time friends. It began here in our home Friday evening when our friends Steve, Giedra, and Jonathan arrived from Ohio/Indiana. After supper, we planted ourselves in the living room and pretty much didn't move until 1 a.m. 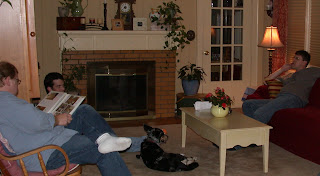 Jonathan, Steve, Dr. H. and I were in college together; Giedra is Steve's wife (whom he met after college), but she is so wonderful that she took part in this memory extravaganza with a smile on her face the whole time. (Only Giedra's foot was in this picture; I'm sure she'll understand that I cropped it out.) We could have talked for many more hours. We have years of memories stored away. Jonathan and I, who came in as freshmen together, were particularly struck by the realization that we've known each other well over half our lives.

On Saturday morning, bright and early, we headed two hours away to Johnson City for alumni weekend at our alma mater. The next few hours on campus were: unsettling, disturbing, comforting, odd, deja-vu-ish, bittersweet, sweet, and hilarious. None of us had really been back to campus for more than a quick and casual drive-through in nearly a decade, and much has changed at our tiny college. New buildings have been erected; old ones torn down or renovated. Nearly everything looked shinier and somehow cleaner. 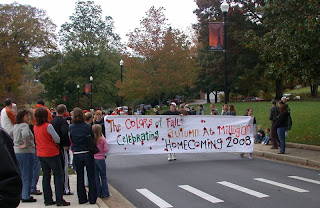 We are all quite sure, for example, that there was not a homecoming parade back when we were students. Fortunately, these parade participants carried forth the southern tradition of throwing outrageous amounts of candy to parade watcher. Duncan was extraordinarily happy for the entire day with pockets full of candy. 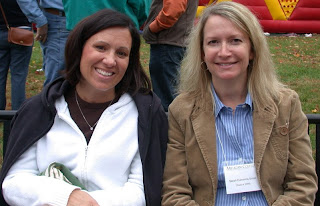 Lindsay, with whom I've reconnected in the past year via Facebook, came all the way from St. Louis for the weekend. Lindsay and I were anomalies at our college because we were New York girls. I can't imagine how many times I heard, "What brought you all the way down here?" We enjoyed an hour or so of watching fellow alumni, trying to figure out if we knew them, while our little boys played on the inflatables.

Somewhere along the line we found our friend Robert strolling across campus. Twenty years ago he would have been wearing a black hat and a trench coat, but it was still rather deja vu to see him wandering across the lawn. The newest building on campus is a gorgeous performing arts center. 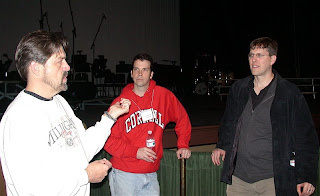 I found it extremely emotional to be standing in the new performing arts center with these three men—Dr. Shields, Dr. Small, and Dr. Chambers— who were once tall, skinny boys named Robert, Randy and Jonathan. All three of them loved Milligan's theatre program, and Jonathan went on to get a PhD in theatre. It's all about that proverbial full circle. 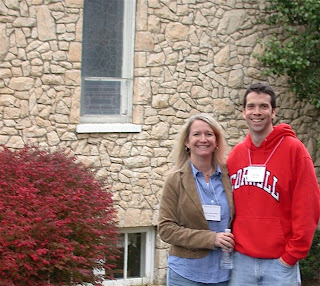 And speaking of full circle, here are Randy and I next to Hopwood Memorial Christian Church, where we were married nearly 20 years ago. Hopwood is on the campus of Milligan College, and Randy and I attended there both during college and after we were married. It's still possibly my favorite church ever; certainly it's the most beautiful.

Jonathan, Steve, Giedra, and Randy and I spent most of the afternoon strolling around campus. There is something surreal about walking in a place which appears so often in one's dreams. I spent four solid years of my life in the place—my coming-of-age novel, were I to write one, would take place here. Some places had hardly changed. Seegar Chapel, where we met for convocation twice weekly for four years, still looked and smelled exactly the same. It was easy to see the ghosts of ourselves and our classmates there. My dormitory, too, was virtually unchanged. In that lobby Jonathan and I watched MTV's Closet Classics religiously at noon each day. In that stairwell Randy and I had our first kiss. Through that third-floor window Tracy, Suzie, Angie and I climbed in the evenings to watch the sunset over Buffalo Mountain.

And other places seemed unfamiliar. A new parking lot, a new courtyard, a planting of trees and shrubs, a missing fountain. Even the smallest changes seem to shake the foundation of memory. Were it not for shared memories, would we question what really happened?

We were done by 6 p.m. Really, quite done. We picked up our friend Rich and went out to eat. Our intentions were to spend the night with Tracy, my best friend from college, but suddenly we knew we needed to go home. Laurel and Duncan weren't feeling well, and we all yearned for the comfort of our living room.

So we all came back here Saturday night. I found my stack of college yearbooks, and the five of us spent several hours laughing until we were dangerously close to hyperventilating. I can't imagine how many people's names came up, generally with a "I wonder what s/he's doing now?" following the memory. We did eventually go to bed, just a little earlier than the night before. 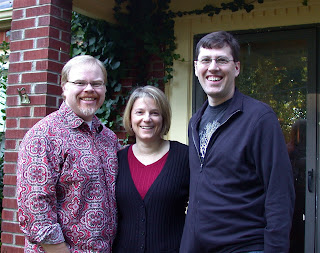 These three headed back to the midwest in the morning, and we headed off to church and back to our regular life. I feel richer somehow today. Weekends like this add a sharpness to edges that have been blurred by time and distance, give definition to memories that hung loosely in the shadows.

I may never go back to another alumni weekend. I've forged a certain peace with my night-time dream wanderings; my feet are on solid ground. What remains, though, is the certainty that our friendships far, far transcend place and memory. And I look forward to more weekends spent laughing in living rooms.
Posted by Sarah @ Sarah at SmallWorld at 9:27 PM