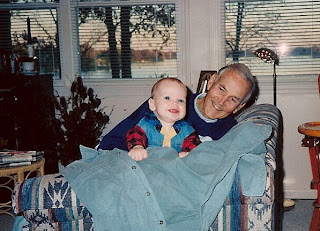 Randy's dad, Ralph M. Small, would celebrated his 91st birthday yesterday. He would have enjoyed going to a restaurant and ordered a rare steak, a loaded baked potato, and a slice of pie with ice cream. I only knew him for the last ten years of his life, and for most of those years he waged a quiet war against prostate cancer. He died 10 years ago, and he is missed.

I remember Ralph mostly as a dignified, well-dressed gentleman who always had a funny story to relate to any situation. He had been a minister for 25 years at a tiny church in rural Illinois, and ministers seem to have an inexhaustible supply of stories. I met him when Randy and I began dating in college, and he was nearing retirement after another full 25-year-career for Standard Publishing in Cincinnati.

(It was during his time in Cincinnati that Ralph, a bachelor at age 60, married Randy's mom and adopted Randy and his brother Greg, who was 16. Randy began a new life at age 10, with a new dad, in a new city, and with a new last name. Ralph had known and loved the boys all their lives, and making the transition to Ralph-as-Dad was an easy one for Randy. But that's another story.)

When our Jesse was born, Ralph became a doting Grandpa. He carted Jesse around in the front carrier and later sat him, as all grandfathers must do, in front of him on the riding lawn mower, in the van, and in the motorboat. He purely knew that boys need to steer. I don't believe this man, who had never had small children of his own, ever grew tired of playing with Jesse.

By the time Laurel was born, Ralph was fading quickly. I'm sorry he never got to dote much on his granddaughter the way he did on Jesse, for surely he would have adored the first girl baby born to the family in 50 years. He died when she was just a year old. Duncan is puzzled when we mention Grandpa. "Great-Grandpa?" he always asks, remembering Randy's grandfather who died just a year ago.
"No, Grandpa," we say. "Daddy's dad." But this has no meaning to him; he has no memories to anchor him to his grandfather, no photographs that link them together.

Ralph's life was nearing its end when I married his son, but the impact he had on my own life is tremendous: he, along with my mother-in-law and Great-Grandpa, raised my husband. Even if my children barely or never knew their grandfather, he comes to them through characteristics of their own daddy: his strong work ethic; his endless supply of old sayings (we call those "Ralph-isms") along the lines of "Lord willin' and the creek don't rise"; his gentleness; his discernment; his desire for knowledge and education; and his respect for all people. And for that, I am unspeakably thankful.

"What you leave behind is not what is engraved in stone monuments, but what is woven into the lives of others."
~Pericles
Posted by Sarah @ Sarah at SmallWorld at 4:31 PM