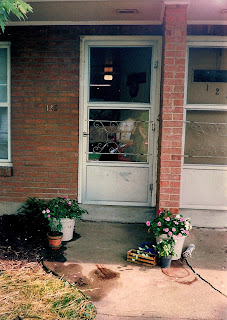 My Monday Memories seem to usually feature either my childhood, my college years, or on my own children; but two significant time periods I don't write much about are the three years we spent in Oxford, Ohio, and the five years we spent in Ames, Iowa. Those eight years were graduate school years, but they were also the years that I think we became grown-ups.

The tiny apartment at 125 Plum Street in Oxford was our first living-on-our-own experience. We'd already been married for two years when we moved here, but those were two years spent amidst our closest friends back in our college town of Johnson City, Tennessee. Our apartment in Johnson City had been the gathering place; I'm not sure we were ever alone there for more than a few hours.

And then, suddenly, we were gone. Well, except that Suzie lived just 45 minutes away, and the Johnson City crew came up once a month and we went down there each month. Still, we felt terribly, terribly alone for awhile without our constant companions. Randy was busy working on his master's degree at Miami University, and I began a job that I absolutely loved, working as an editorial assistant at an international business association's headquarters. We fell into a pattern eventually of quiet evenings during the week and then traveling or having visitors most weekends. We saw tons of concerts in Cincinnati and did a whole lot of shopping. (I also, for the first time ever, had an actual salary.) We bought our first new car.

And midway through our second year there, we had our first baby. After Jesse was born, Randy became a stay-at-home dad by day and a graduate student by night, and I continued working. By Jesse's 10-month mark, I couldn't bear to leave him any longer, and Randy really needed to finish his master's degree. So I came home and Randy went back to doing something he swore he'd never do again: be a waiter. But he worked in a nice restaurant and was able to spend more time finishing his thesis.

In July of that third year, we left Ohio for Ames, Iowa, the next stop on our journey.

I have mixed feelings about Oxford, Ohio. We have great memories of our life there. I loved my job, and I developed a huge set of skills there: editing, desktop publishing, design, writing, interviewing, etc. We met a few special people, but I've only kept in touch, sort of, with one friend. I liked living near Cincinnati, but Oxford itself was a rather uppity town. I had issues with kids who drove BMWs and Saabs to classes.

Mostly, those were the amazing days of being brand-new parents. I can see so clearly, still, the sidewalk where Jesse and I would walk every day, the library where I'd take him for story-hour, the beautiful brick buildings of the university. I remember the sun shining on his blonde curls and him standing at the window, waiting for Daddy to get home. His little blue hat.

But Oxford was just a brief stop on the journey. We were standing there with one foot in college-life and one in adulthood, and sometimes that crevice was hard to straddle. I think my real mommy years kicked in when we got to Ames, Iowa. But that's a memory for another Monday.
Posted by Sarah @ Sarah at SmallWorld at 4:20 PM