I Survived the Fall Festival

I promised them that we'd go this year. Last year I publicly confessed that I do not like to go to the Foothills Fall Festival. Yes, it's won national awards: "The Best Festival in the Southeast!" and "One of the Top Ten Fall Festivals in the Country!" Foreigner is playing there right this minute, and my teenager is somehow hanging outside the festival area listening. There are 13 more acts this weekend, including Billy Ray Cyrus and my personal favorite from my childhood, Kenny Rogers. I'll never forget the joy my 8th grade year when my friends Ros and Lisa gave me a Kenny Rogers Greatest Hits album for my birthday, along with a green Izod golf shirt! That was a great birthday.

But I digress. Besides the very reasonable $35 weekend pass for the concert area, there is also a gigantic FREE children's adventureland and a craft show. And like I said, this year I promised I'd take them. 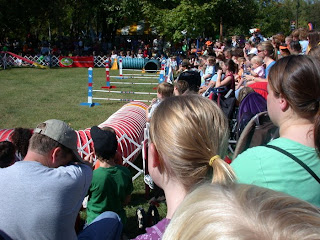 Here are the back of their heads as they watch the dog show along with 62,000 other people. (Yes, I made that number up.) 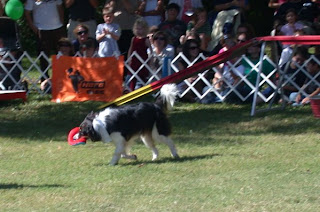 I'm sorry, but I don't understand why we get so excited about animals doing tricks. I try to be enthusiastic, and I do clap as if I'm truly enthralled with these talented beasts, but I'd rather be raking leaves than watching dogs catch frisbees. I am quite sure I am lacking some fundamental character trait, and I probably shouldn't have admitted that. 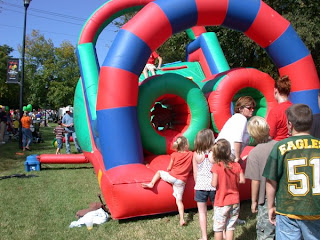 There's Duncan, fourth in line in the brown shirt. He went on this particular inflatable many, many times while Laurel and I sweated profusely. 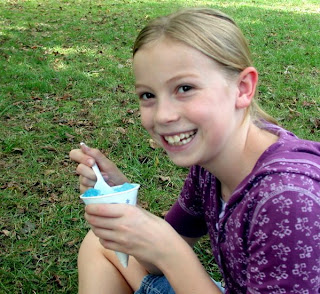 Obviously, she deserved a sno-cone when he was done. But didn't sno-cones used to be, well, flavorful? I'm just saying. 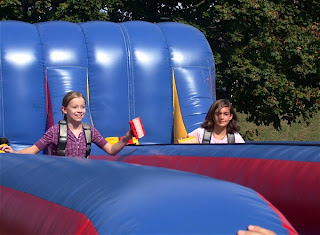 We did run into some friends midway through our outing. Friends do make everything so much more enjoyable. 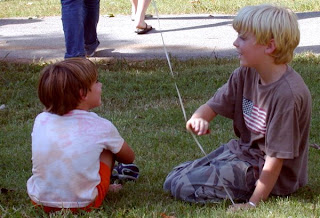 Duncan could spend every waking moment with his friend Noah, so it was an extra treat to run into Noah at the festival. Next year maybe I could get Noah and his mom and sister to skip the fall festival and just hang out here for a few hours. I would even blow up balloons and make deep-fried Twinkies.
We spent less than three hours there, and I was utterly exhausted. Crowds, noise, heat, long lines, bodies: that kind of stuff wears me out. I would have loved the fall festival when I was a teenager—the people watching, the thrill of independence, the throngs of people. Now, not so much. I just want water and a bench in the shade.

But the good news is, I've done my duty! I've fulfilled my promise, with a smile on my face, and I'm home in my quiet kitchen. The house is very quiet tonight. Dr. H. went on a solo backpacking trip; Jesse is hanging out at the festival with a friend; and Laurel is at a sleepover. Duncan and I enjoyed a rare evening together, just the two of us, with a movie and Zaxby's chicken wings. And 5 hours after returning from the festival, I'm beginning to recover. A good dose of quiet goes a long way.
Posted by Sarah @ Sarah at SmallWorld at 9:21 PM