The Yard in September

"The breezes taste of apple peel.
The air is full of smells to feel-
Ripe fruit, old footballs,
Burning brush, new books, erasers,
Chalk, and such.
The bee, his hive, well-honeyed hum,
And Mother cuts chrysanthemums.
Like plates washed clean with suds, the days
Are polished with a morning haze."
- John Updike, September 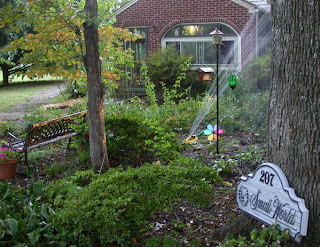 It happens every year. In April, May and early June I garden with some diligence, planting flowers, spreading mulch, pulling weeds. My goal is to always add some new perennial each year and work on one new space in our rather extensive flowerbeds. If I had more money, I'd get it all done in a year or two, but I have to stop when I run out. (Dave says.)

The flowerbeds look lovely in the spring and early summer, but by mid-July and August, things are dry and droopy. We had more rain here than usual this summer, but not nearly enough to keep flowers happy and lush. It's too hot during the summer to work in the flowerbeds, so at the most I'll halfheartedly pull some weeds and deadhead some Black-eyed Susans every now and then in August.

But in September I have a renewed interested in the flowerbeds and landscaping in general. Those dry and droopy flowers begin perking up, and some of my favorites are suddenly in full color. 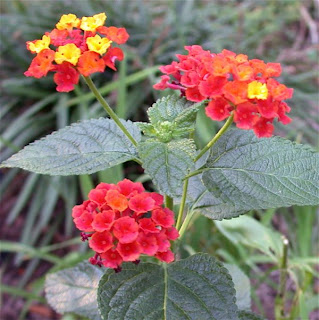 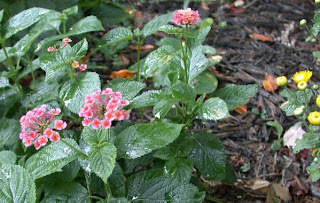 I love lantana. It comes in several different shades and loves the heat. Here in Tennessee it is a perennial, although last year's plant often doesn't appear until early July and then doesn't flower until late August. You have to remember where you planted them. You can also winter these easily by bringing a few plants inside in pots. (Be aware, though, as they tend to smell like cat pee and you'll keep trying to figure out where that bad cat peed.) Lantanas are extremely heat resistant and don't need huge amounts of water. They are really stunning in autumn. 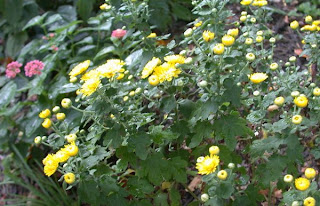 I've heard some people say they hate chrysanthemums, but I think they are fabulous for fall color. Each year I buy several plants that claim to be winter hardy, but I rarely have any survive. I'm sure it's a combination of our bad soil and my lack of watering skills. The one above has done well for a few years thus far. Back in Iowa, our 'mums were outrageously prolific, and I'm still aiming for that profusion one of these years. 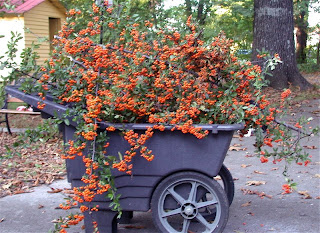 This is a barrow full of pyracantha branches. I had to do some trimming yesterday. The tree was so loaded with berries and branches that it covered half of the picnic table and blocked a pathway into the backyard. It seems decoratively criminal to toss out all of these beautiful berries, but I have already loaded vases full inside the house and out. And there are plenty more where those came from.

By this weekend it looks like our rosebushes will flower again, and the dogwoods are just starting to turn and put out their pretty red berries. In just another month we'll be in the midst of the oranges, reds, and yellows of late October in Tennessee.

"The foliage has been losing its freshness through the month of August, and here and there a yellow leaf shows itself like the first gray hair amidst the locks of a beauty who has seen one season too many."
- Oliver Wendell Holmes
Posted by Sarah @ Sarah at SmallWorld at 8:34 AM

Email ThisBlogThis!Share to TwitterShare to FacebookShare to Pinterest
Labels: gardening, Slices of Life