Field Trip Review: The Tomb and MajiQuest in Pigeon Forge

We live in an extraordinarily homeschooling-friendly area. Between our own historical Blount County, the Great Smoky Mountains National Park, Knoxville and the Gatlinburg/Pigeon Forge areas, opportunities for field trips are endless AND so many of the attractions extend generous offers to homeschooling families.

Recently we were offered a fabulous deal at The Tomb, a new attraction in Pigeon Forge. My friend and I took our boys, both 6th graders. At first we drove by the building because we were expecting something big, like Wonderworks. The Tomb turned out to be just the end building in a strip mall, so we honestly weren't expecting much. 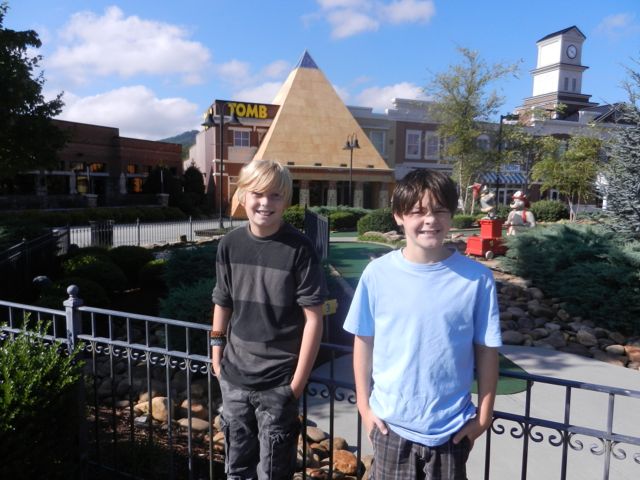 We didn't really care if it turned out to be lame, since we got in free.  But you know the old adage: never just a book by its cover, or a Pigeon Forge attraction by its showiness. The Tomb was fantastic!

The adventure takes about one hour. You are with a group of about 8-10 people, and your tour guide/archeologist takes your group through a series of rooms with all kinds of challenges that you have to figure out together in order to solve the mystery. That's really all I can say without revealing too much. Our tour guide was enthusiastic and managed to stay in character throughout the challenge. I would say this adventure is best for kids between 7 and 12 years old. Younger children may be frightened especially in the first room—this is a mummy's tomb, after all. There was one little girl of about 6 in our group who screamed and cried hysterically. 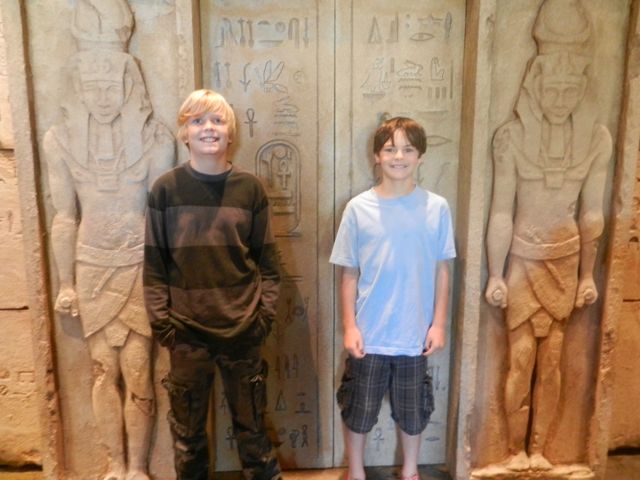 Our boys loved it. I don't say this often, but I would actually pay the full price of $10.99/kids, $13.99/adults for this attraction. It was very well done and different than so many touristy places. 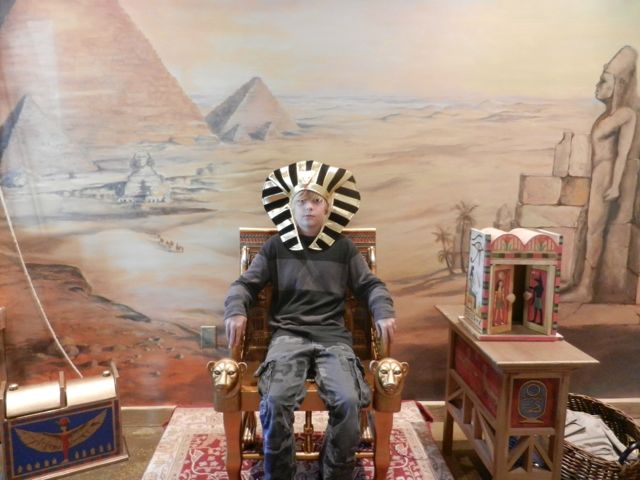 If you happen to be studying ancient Egypt and will be in the Gatlinburg/Pigeon Forge TN area, this is a must do! 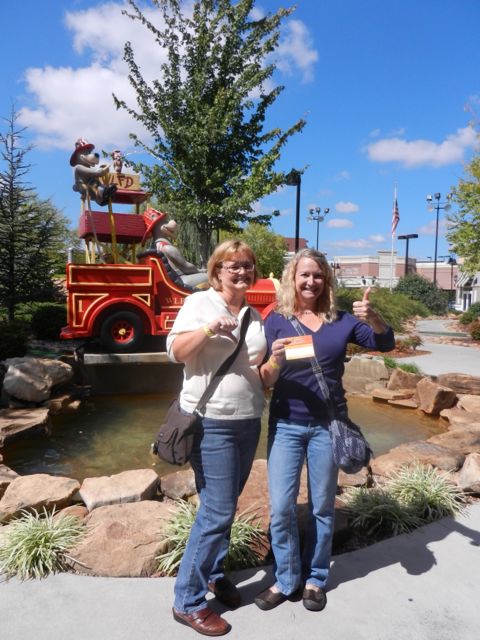 Part of our freebie day included playing miniature golf at Firehouse Golf, right outside of The Tomb. I haven't played miniature golf in years, and I must say this was tons of fun, especially since I beat my friend Diane by one point. She's very competitive. I think the price of this golf was $8/game. I don't know how that compares to other places, but it was fun. I probably wouldn't pay $32 for a family of four to play putt-putt, but I'm kind of a cheapo. 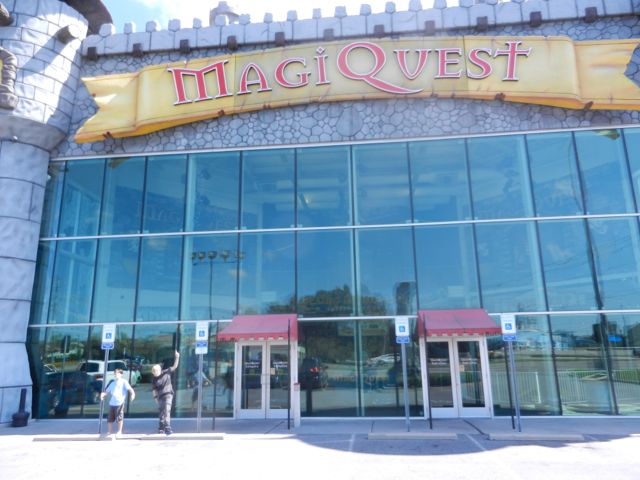 Also included in our educators' discount day was MagiQuest, across the street from The Tomb. I know! Can you believe all this good stuff we got to do? The MagiQuest building actually contains four different adventures: Pirate Golf, the Odyssey Mirror Maze, the Vault, and MagiQuest itself. 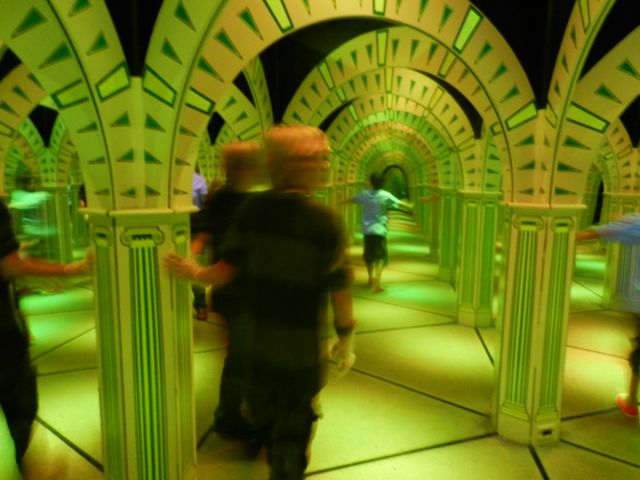 We started with the Mirror Maze, which was really, really difficult. Basically, Diane and I followed the boys around until the figured out how to get out. I was getting a little nervous, to be honest!

The Vault is a laser challenge in which you are supposed to jump over and crawl under beams of light in a small, dark room to get to the other side. The boys liked this. I cheated and ran through, having figured out that nothing was going to blow up if I chose to ignore the whole purpose of the game.

The boys did the Pirate Miniature Golf and enjoyed it, mostly because it was a blacklight course filled with Pirate-ish things.

But MagiQuest is really the main attraction here, and WOW! This was absolutely amazing. Any Harry Potter and Lord of the Rings fans will love this "world within a world" journey, where each person is essentially on his or her own, equipped with a wand and a guide book. The object is to embark on a series of quests, each one requiring that different riddle be solved and treasures found. I think I finished 3 out of about 10 quests in one hour. After you finish all 10 quests, you can embark on adventures, which are even more complex.

MagiQuest if not for little kids unless a  parent plans to partner up with them; however, you are only given one hour in which to solve your quests. At almost $20/hour, this could be a pricey attraction. I was just getting warmed up when my hour was up, and I could totally see paying another $20 to solve more puzzles. It was really, really fun and extremely well done! The staff was plentiful and super helpful. The boys liked this, but I think they would have liked it more had they been a couple of years older. We saw lots of teenagers and young adults at MagiQuest, and some looked like they were coming back to embark on more quests. I would absolutely do this again!

This was an awesome day in Pigeon Forge, filled with all kinds of problem-solving adventures. I would highly recommend The Tomb and MagiQuest if you have Pigeon Forge/Gatlinburg in your vacation plans!

Here are some more local attractions that I've reviewed:

Posted by Sarah @ Sarah at SmallWorld at 2:11 PM