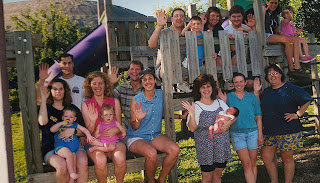 A couple of weeks ago I wrote about our three years in Oxford, Ohio, when Randy was in graduate school at Miami University. Even more significant in the History of SmallWorld are the 5 years we spent in Ames, Iowa.

It seems odd to me to think I ever lived in Iowa. I never thought about Iowa until, suddenly, we lived there. To most Easterners, Iowa is a big unknown, along the lines of Nebraska, Idaho, the Dakotas and Children of the Corn. Kansas is a bit more familiar because of Dorothy et al, and Nevada because of Las Vegas and CSI, but in general those expansive states of corn and beans are, well, big blanks in our collective, congested mind.

But Mr. H. wanted to become Dr. H. and he specifically wanted to work with someone at Iowa State; so when Jesse was 17 months old, we packed up our tiny red Tercel and headed for the Wide Open Spaces. In Ames, Iowa, we were 10 hours away from Randy's folks in Indiana, 17 hours away from our friends in Tennessee, and 20 hours away from my family in upstate New York.

Iowa is, truly, filled with fields of corn and soybeans. As an added benefit, there are more pigs than people in the state. The climate is horrendous. The summers are blazing hot, the winters are Arctic-like with snow from October-April, and spring and fall each last three days. The wind blows incessantly with no mountains to stop its journey. For a girl who grew up among orchards and deep blue lakes and fell in love in the mountains, there is nothing aesthetically pleasing about Iowa.

But we lived in the best city ever. Ames, Iowa is an amazing place; it is a family's dream town. Sidewalks, bike trails, a thriving downtown with actual toy stores and bookshops, a perfect library, a clean and well-used city bus system, swimming pools, parks with huge wooden structures every few blocks, neighborhood schools, concerts—I could go on and on. I loved the city of Ames.

And the soil! Put a seed in that rick black dirt, and the next day you'll have a plant. I had prolific vegetable gardens in Iowa. My flowerbeds were a riot of color, and digging in that dirt was a pleasure. I'd love a bushel of Iowa corn and tomatoes nowadays.

But those are just things. Most importantly, in Iowa I found the gentle rhythm of mothering, I found a new level of spiritual development, and I found my writer's voice. The Iowa years were years of huge personal growth.

In Iowa I settled into being a stay-at-home mama. Back in Ohio I had worked full-time until a few months before we moved. I didn't know the sheer exhaustion that comes with full-time mothering, or the pure joy that makes every tired moment worth it. My days in Iowa were spent enjoying my first child grow, and then delighting in my second child, as well. I have a thousand mind-pictures of my two little ones in Iowa, of snow and puddles and bright yellow boots, tiny hats and mittens, warm blankets and frosty windows. And tractors.

In Iowa we got serious about being part of the church. Until then we'd hopped here and there without any real purpose. But in Ames we found a place filled with people who would become incredibly important to us. It was at this church that we experienced our first small group, and that group was pivotal in our spiritual growth. That small group was everything that it was supposed to be, and it spoiled us forever. Every Tuesday night for two years or so we met with these people, and we loved them. I'll never forget the night we said good-bye. As ecstatic as we were to be starting our new life in Tennessee, we were broken-hearted at leaving our friends. That's our group in the photo above. They made us a scrapbook as a going-away present. I look at it now and remember those beautiful people who made our 5 years in exile more than bearable.

And in Iowa, I found my writer's voice. I knew I had all this inside of me; I've known since my earliest memory that I have to write. But being in Iowa for five years provided me with an opportunity to go to graduate school, and I quickly, quite suddenly, found my voice. I didn't know I would be a poet; I didn't know I had a bent for creative nonfiction. I certainly never thought I would really be published. A shadowy part of me that sat twiddling its thumbs beneath my surface became quite defined. And I wrote, furiously and obsessively.

I was thrilled to leave the state of Iowa. It is only now, nine years later, that I miss snow. Or rather, I miss that my children won't ever know the pleasures of snow play. I don't miss the relentless wind or the sweltering summers, but I do miss the smell of soil and the thick, rich dirt beneath my nails. I miss the productive trains, speeding through town, and the carefully arranged grid of a midwestern city, neatly lined with sidewalks. For years I could not think of our small group friends without a pang of heartsickness. (Now, I just look forward to a time when they figure out Facebook so we can reconnect.)

It's all a part of who we are, those places. We take away some things, leave others behind—rounding out, giving shape, being formed.
Posted by Sarah @ Sarah at SmallWorld at 9:20 PM