I can't even comprehend that this is the middle of July already. One of my FB friends posted that her daughter headed back to school today-- a private school, but still. Ahhh! I feel like summer is just getting started. I've been in the South for 17 straight years, and I still can't get used to mid-July being nearly the end of summer.

Duncan was at church camp for a week, and then Randy and Duncan were at Boy Scout camp for another week. We managed to squeeze in some fun days when they returned: hiking, kayaking, disc golfing.


While they were gone, Laurel painted her bedroom, and I've been packing up our guest apartment. We plan to get new carpet and flooring put in in preparation for my parents' inevitable transition from their own home to our apartment. We're thinking that it will be within the next 6 months, but it could be longer than that.  The apartment used to be our schoolroom, and w-o-w. Do we ever have a lot of books! I sold a bunch of curriculum but there are just those books (OK, eight tubs of books) that I just cannot get rid of. The memories!

We had a huge red oak tree taken down. Now we have a backyard full of, well, dead wood. I look forward to getting that all cleared away and reclaiming our yard! Feels like a lot of physical things are changing around here. Old tree gone, young girl room paint gone, maps and posters and books gone. My little family is growing up. 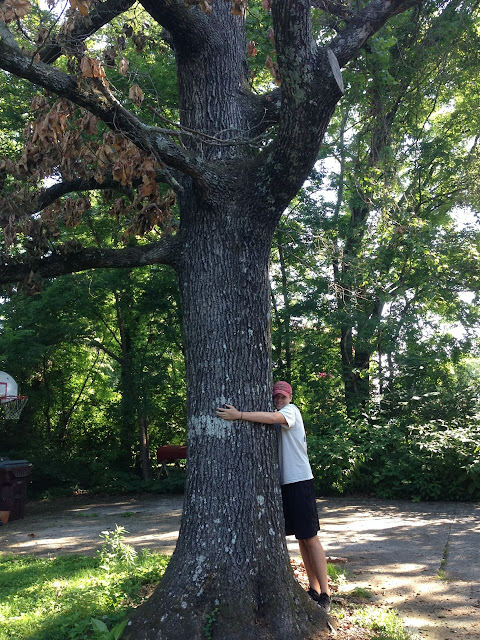 So, we made a big decision a couple of months ago: Duncan is going to do 5 years of high school. It's a weird new thing that's gaining popularity around here. He was set to graduate and go to college at age 17 (2018), and we just started second-guessing that decision for various reasons. From a financial standpoint, it would be really difficult for us to have two kids in college at the same time. If he waits another year, Laurel will have graduated from college. Another huge reason is that he just doesn't seem quite ready to go to college. He's having fun-- he's 16! Nearly all his friends are graduating in 2019, the year he really would have graduated had we not skipped 7th grade. Ultimately, we all felt that waiting until 2019 to graduate is the best course of action.

His next couple of years, we'll be able to spread out his last requirements so that he won't have to be overwhelmed with school. He'll be able to pursue some interests that otherwise would have been pushed aside for required classes and college applications. We'll be able to travel a little without worrying about getting behind. OK, OK. And I get to have two more years with him at home. I admit, I'm happy about that.

Right now we're just all acutely aware of how precious time is together. This week our older son lost one of his best friends in a motorcycle accident. Halden (on the left) and Jesse have known each other since they were little guys. They've had countless adventures together and have lived together in an apartment for the past year or so. Halden's dad was president of our support group for years, and we just love their family. Halden was full of adventure and creativity. He could fix anything and was always ready to try the next thing. To say he will be so deeply missed seems inadequate.

"He goes free of the earth.
The sun of his last day sets
clear in the sweetness of his liberty.
The earth recovers from his dying,
the hallow of his life remaining
in all his death leaves.
Radiances know him. Grown lighter
than breath, he is set free
in our remembering. Grown brighter
than vision, he goes dark
into the life of the hill
that holds his peace.
He is hidden among all that is,
and cannot be lost."
(Wendell Berry)