Things I Learned in June

1. I can justify paying $1.99/episode to watch a series on amazon prime that isn't yet free on Netflix. As my friend told me, people pay more than that to have a Starbucks every day. So, I am watching Revolution a few times a week, and I love it. And it's OK. I don't have to feel guilty for it. (Can you tell I have Depression-era parents? And that we do Dave Ramsey?)

2. I need to be a more attentive listener—or I need to fake it better sometimes. A friend's son recently told me that he can tell when I've checked out of a story because I get this blank look on my face. It's true. Sometimes I can't follow stories or I start thinking about something else while someone is talking, and I am sure I smile and nod at inappropriate moments. And sometimes I can't think of anything to say at the end of a narrative except, "Cool." He totally busted me. Please note: I'm a really good listener in general, but it's kind of like the car chase scenes in movies: sometimes stories go on and on so long that I lose track, especially if these stories are about hunting or the economy or such things.

3. I love teenagers. I didn't just learn that in June, but I've spent a lot of time with a lot of teens in June, and I am impressed with and grateful for them over and over again. They are funny and ridiculous and compassionate and dramatic and so loveable. For the most part.

4. If the gas gauge is on empty and you have no idea how long it's been like that, get gas at the first exit. Also, it's good to be riding with a friend who has AAA—and who makes you laugh a lot.

5. There is no Moe's in Cleveland, Tennessee, so don't wait for the exit with the Moe's to get gas.

7. Summer really only starts when everything else is done—and I never want to wait until the end of June to start summer again!

What have you learned in June? You can link up with Emily at Chatting at the Sky.
Posted by Sarah @ Sarah at SmallWorld at 5:13 PM 2 comments:

* I really am going to start blogging again. Really. It's just that things have been so crazy around here. I've spent countless hours in the past month getting ready for and doing AHG camp. Every now and then I remember that I really should grade one more stray research paper or journal from my lit class. And then I run over to see my parents or take 15 minutes to fix a lousy supper. And I've read about 25 pages in a book in the past two weeks.

* But now it's all over. Camp, that is. The last papers are graded. We have groceries in our fridge. And I'm ready to have fun. Yesterday we welcomed in summer's official start by getting on the lake with friends. I am so happy to have a wonderful friend with a boat! The kids had a fantastic time tubing and swimming. And, well, everything is good when you are on the water, surrounded by mountains. 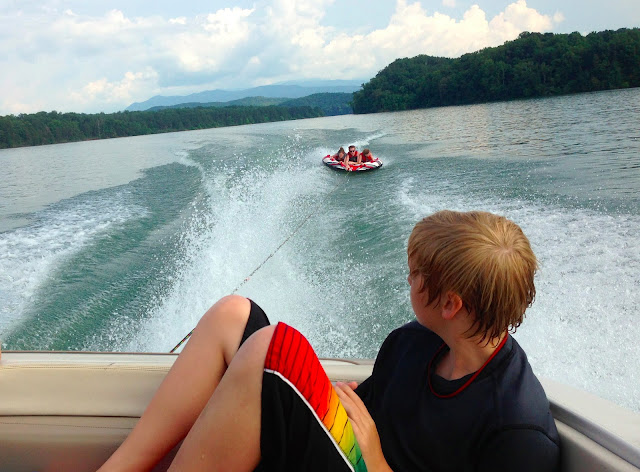 * I'm not the only one who's been working like crazy. Just last week Laurel put in 30-something hours of service, volunteering at VBS, Second Harvest Food Bank, AHG camp, and our support group. I was really exhausted and done after our three-day AHG camp, but I wasn't too exhausted to get a lump in my throat seeing these girls together at the end of camp. We always have our oldest girls be our camp leaders, and this is their third camp as leaders. And last. Next time we do camp, they'll all have graduated from high school. 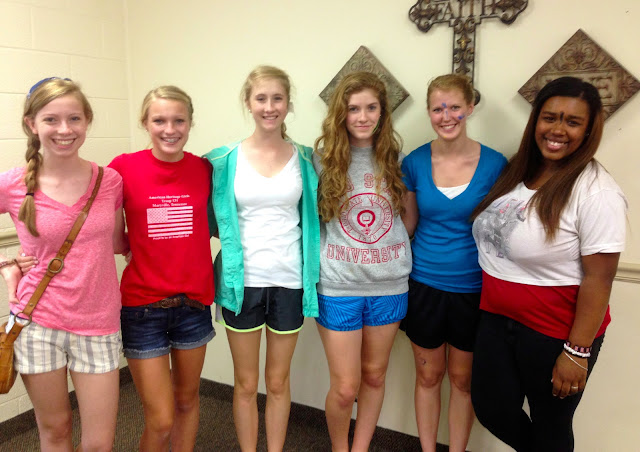 They are the sweetest, kindest, funniest girls I could ever hope to know. My daughter has wonderful friends. And they all deserve a fabulous summer.

* And now that I'm done with all my stuff and ready to spend some time with Duncan, he is off to camps for the next two weeks. He'll be at church camp next week and Boy Scout camp the week after.  I'm hoping to tackle some painting projects.

* And to blog. I have about sixteen dozen blog posts swimming around in my head.

* But speaking of swimming, I might just spend all my time in the water instead of blogging.

Happy summer!
Posted by Sarah @ Sarah at SmallWorld at 10:11 AM No comments:

Last week we came to the end of year 13. Thirteen years we've been doing life together like this, and I wouldn't trade it for anything in the world.

This was our first day back in August, with Duncan in 6th/7th and Laurel starting her sophomore year. 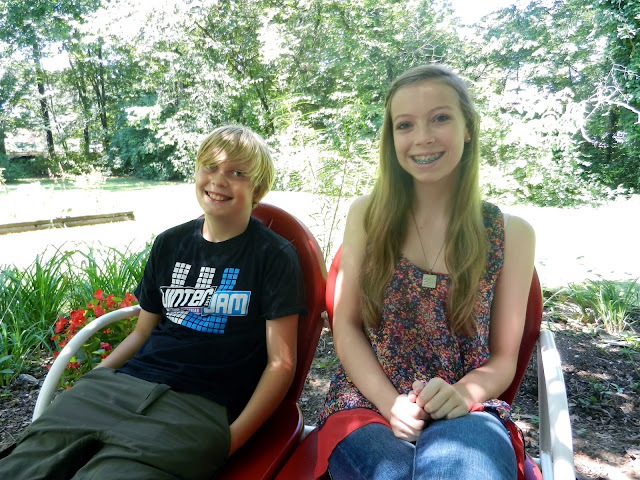 I think they've both changed a lot since then. I don't have a last day picture, but I do have a few hundred from our trip to Paris in May. Here's one of all three kids on the Eiffel Tower. 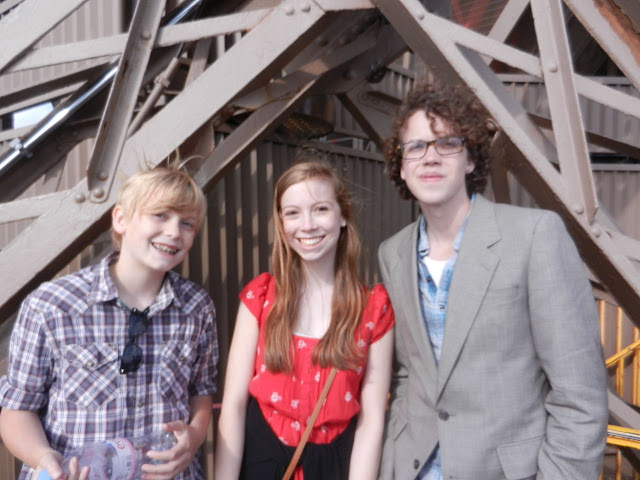 We did a lot of really fun stuff this year, like catching butterflies in the Smokies, riding our bikes around Cades Cove, listening to the elk bugle in Cataloochee.

And, of course, we took the mother of all field trips: we spent 10 days in Paris. I only have two days of that recorded so far!

Academically, Jesse has finished his junior year at Belmont University. Once again he was on the Dean's list (that's all 6 semesters), and this time he had a perfect 4.0. He received three awards for writing excellence, including the university's top writing award. Yep. We're proud. He's been home for the first 6 weeks of summer but will head up to my brother's in New York to work on his farm starting next week. In August he'll go to Florence, Italy, for his semester abroad.


Laurel finished her sophomore year. She's a simply wonderful girl in every possible way. She is a self-motivated, self-disciplined scholar who has a great sense of balance between social life and getting her work done. She does carry a good dose of the family procrastination gene, but it's to be expected. We seem to work better that way most of the time. This year all of her classes were at our co-op:
After two years of high school, she just has 8 hours left. She could graduate after next year, but we'll just take it easy and have a fairly low-key senior year. In addition to her classes, she participated in American Heritage Girls and did regular babysitting for a Moms group at our church. New this year: Laurel was on student council for our homeschooling support group and on the youth leadership team at our church. She's enjoyed both of them, especially student council, which plans and implements almost all the teen activities for our group. And of course there were all kinds of fun things going on, from dances to parties to the prom—and, of course, France. It always comes back to France, doesn't
it?


Duncan start off in sixth grade this year and ended by finishing up seventh grade. We made the decision in December to go ahead and bump him all the way up. We've been doing a kind of blend of grades for the past two years, and we all felt like he was officially ready to move up a grade. Part of it has to do with his mid-year birthday (Christmas Day) and just feeling like he is emotionally and academically ready. This year Duncan and I studied World War II for history and literature. We didn't get everything done that I had intended to, but hey—we went to Normandy! Yep, we're back in France again.


And we also went to the Army Museum in France, which includes an extensive World War II collection. Like, 2 or 3 floors of WWII exhibits.


Another huge part of his WWII studies was a class called Dialogues with Veterans. In this co-op class, the kids learned about various wars/conflicts in which the U.S. was involved, and then in the next week's session, a veteran from that particular war came to class and talked with them. During the session on WWII, my Dad was one of the two veterans invited to share their stories. I cannot even begin to express how amazing it is that my 12-year-old son and his classmates got to hear about the war from three members of the Greatest Generation who were there, including his own grandfather. That in itself makes the entire year a spectacular success.

Duncan continued to make leaps and bounds in math, finishing pre-algebra mid-year and beginnign algebra 1. He's going to continue algebra 1 next year, this time taking it at co-op class. It will be his first for-credit high school class! In other areas, Duncan continued to do great in Boy Scouts. I wish I knew what level he is now, but I'm afraid I can't remember. Maybe the one before Star? Maybe Star? He also started guitar lessons back in January and has really caught on quickly.

I know. It all sounds so nice and happy. Honestly? Our homeschooling life is pretty steady and simple. My kids are smart. It's not like they are eager each day to begin school. Laurel would much rather be hanging out with her friends at a coffeehouse. Duncan would much rather be playing video games. But they recognize that this is their life. They do what they need to do. Education, for us, is life. And life is education. You know, like going to France.

{I got it in there one more time.}

It was a very good year. I still have a couple of American Lit research papers to grade, journals to read, and grades to report to parents, but I'm getting close. We've already signed up for classes at our co-op for next year, and now I'm ready for a long summer break.

Rivers, mountains, lightning bugs, family, and friends: that's all I hope to be doing for the next couple of months. Until next August—we're all wrapped up! 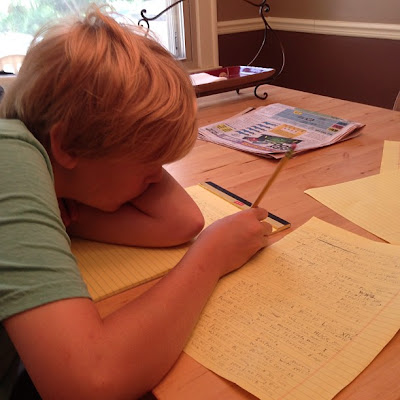 Yesterday was our last official day of school—although we have lots of reading left to do and movies to watch on rainy days, and Laurel has one paper to finish and the ACT to study for. For Duncan, it's the end of seventh grade, and Laurel has finished her sophomore year of high school. His very last assignment was to write an essay about, well, of course, our trip to France. 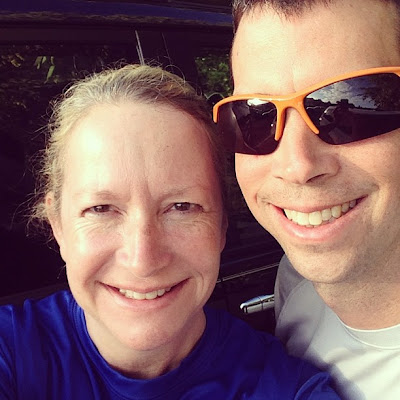 And today we can officially declare as the first day of summer! Randy and I kicked off summer with the Skeeter Run, a 5K to raise money for mosquito nets in Africa. The race began at 8 a.m., and it was really, really hot. It might be our only 5K of the summer, although Randy is going to be training all summer for a triathlon in August.

I'm ready for summer. I'm looking forward to afternoons in the mountains, sitting by the river while the kids swim; hiking and camping; spending lots of time with friends and family; and getting a few projects done around the house. And that's about all I hope to do!


Linked up with Saturday Snapshot

Posted by Sarah @ Sarah at SmallWorld at 9:33 AM No comments: