With only one left at home and only one class at our co-op, I'm enjoying a somewhat easier year thus far. I've had a little time for a few spontaneous hikes, I've been able to spend a little more time with my parents, I've been able to work out a few days each week, and I've even been able to keep my house fairly clean. It feels kind of like a sabbatical year for me, a between year. I like it.

On the other hand, I've been doing a lot of driving this year. Duncan has a class or two elsewhere every day of the week. On Mondays, he has chemistry at our co-op. It's Apologia, which is close to the bottom of our list for science programs, but it's what the teacher uses, so.... there is that. On Tuesdays and Thursdays, he has a trig class that he absolutely loves. It's just him and 4 of his best friends and a teacher who, as he says, "really understands boys." That's hugely important. On Wednesdays he has college prep study skills and then my class, which is World Literature and World Geography combined. We've began the year with the memoir Funny in Farsi and are now reading Nectar in a Sieve. On Thursday afternoons, I teach a small German class (5 students) at my house. Fridays are different each week, but one Friday each month we have an Appalachian Studies course that takes the whole day (or even overnight). He also alternates Fridays with serving at Second Harvest Food Bank, having student council meetings, and Boy Scout events. I don't think we've had a quiet Friday at home yet.


Besides school, Duncan has Boy Scout events weekly: regular meetings, camping trips, hikes, ultimate Frisbee, etc. On Sept. 11 he and several of his fellow troop members volunteered to do the 2 a.m.-4 a.m. shift for a 9/11 flag retirement ceremony.


Next week he'll once again escort veterans at the airport as they gather for the next Honor Air flight. And he's also beginning his Eagle Scout project! He is writing up his project proposal now, so hopefully that will get approved and he can do the project itself in November.

Unbelievably, we've started the college search process. We visited Appalachian State University with several friends last week. It was a beautiful campus, but we're just at the beginning of the search process. I have no idea where Duncan will end up!


Laurel is loving her semester abroad in Vienna and seems to be seizing every opportunity to have travel adventures. She has classes generally Monday-Thursday and then travels on the weekends. So far she's been to Dorgastein, Salzburg, Hallstatt, and Prague, and she's actually in Amsterdam right now.


And that's what's been going on in our own SmallWorld in September.


Linked up with the Weekly Wrap-Up
Posted by Sarah @ Sarah at SmallWorld at 1:15 PM 3 comments:

I've been doing a lot of hiking lately in order to finish hiking 100 miles in the Smokies by December 6. I'm making good progress, but I still have nearly 30 miles to go!

Here are some pictures of our most recent hikes. 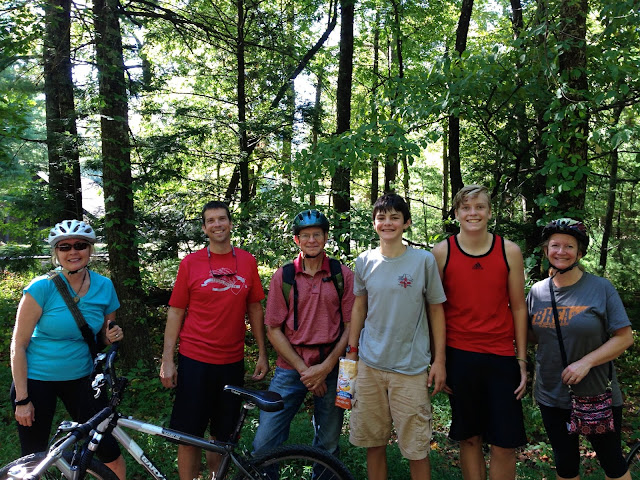 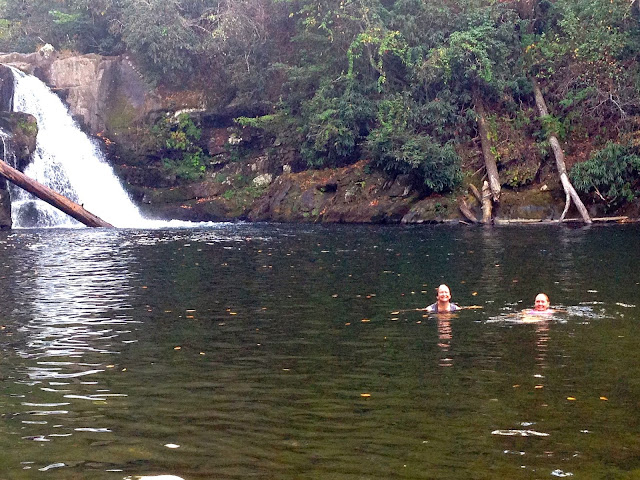 Abrams Falls is a challenging trail for me. Lots of roots and rocks and, well, we also had biked the 11 mile loop at Cades Cove that morning. But getting in the creek at the falls made it all worth it! Lovely and cold on a hot day!


Meigs Creek: 7 miles
Randy and I added 7 miles with the Meigs Creek Trail last week. I really enjoyed this trail. We got there early on a Saturday morning and only passed a few people on our way back down. 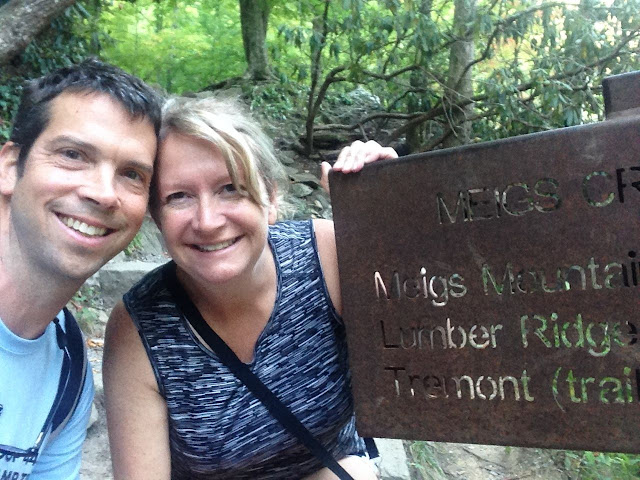 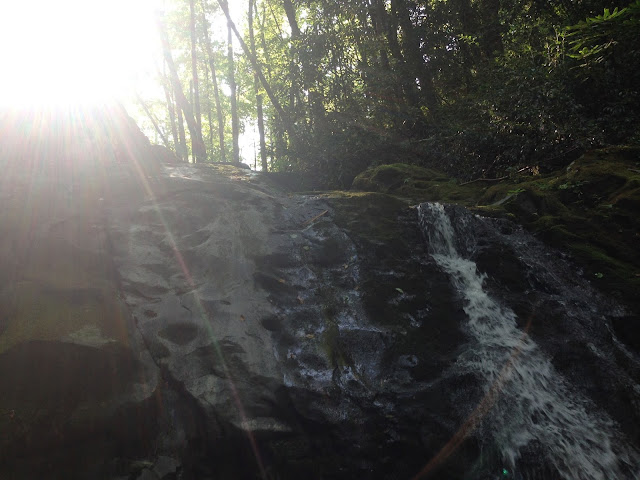 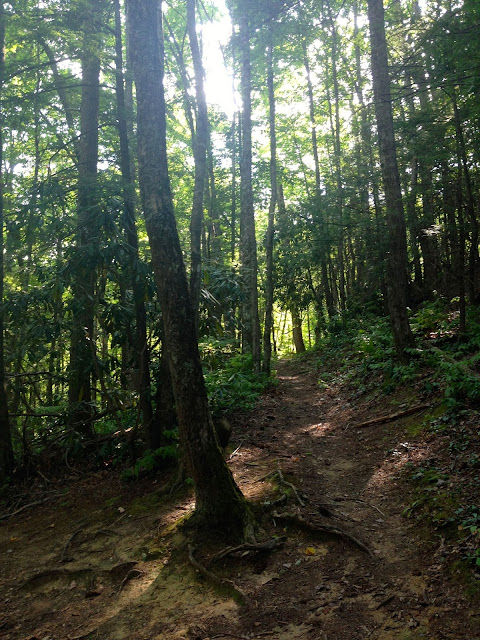 Curry Mountain: 6.6 miles
My friend Cathy and I hiked the Curry Mountain Trail for another 6.6 miles on September 1. It was H-O-T!! It started pouring on the way back down, though, so we did get a little cooled off! We didn't pass even one single hiker that day. 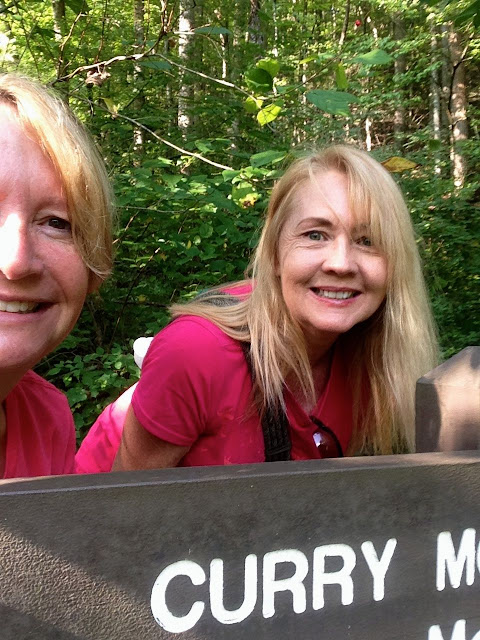 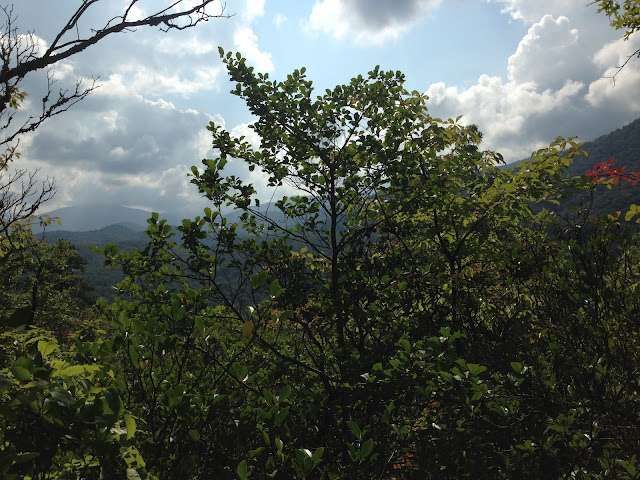 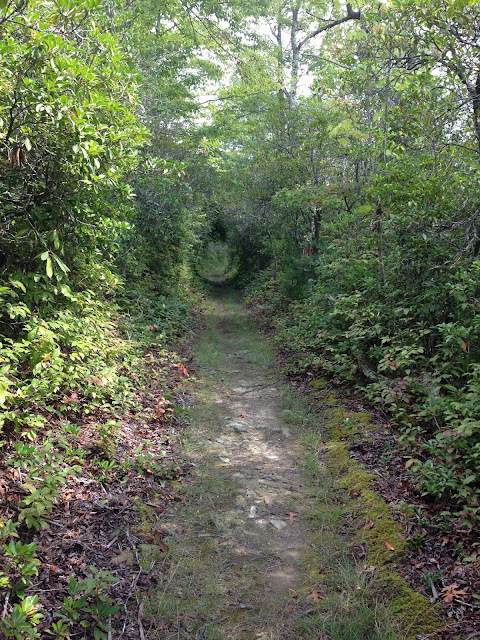 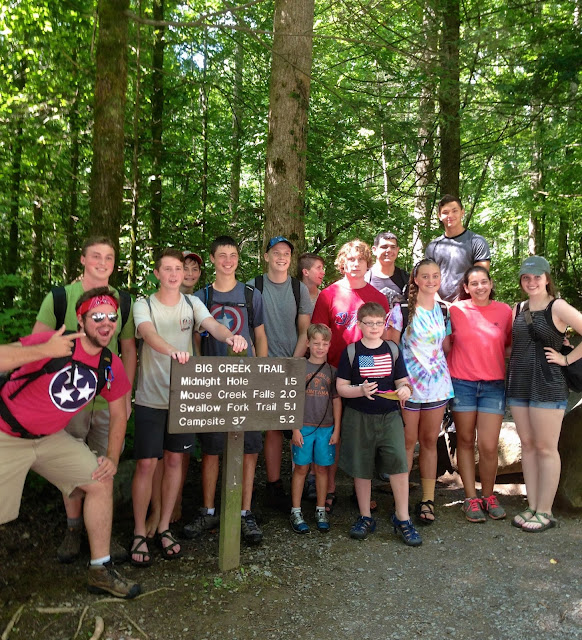 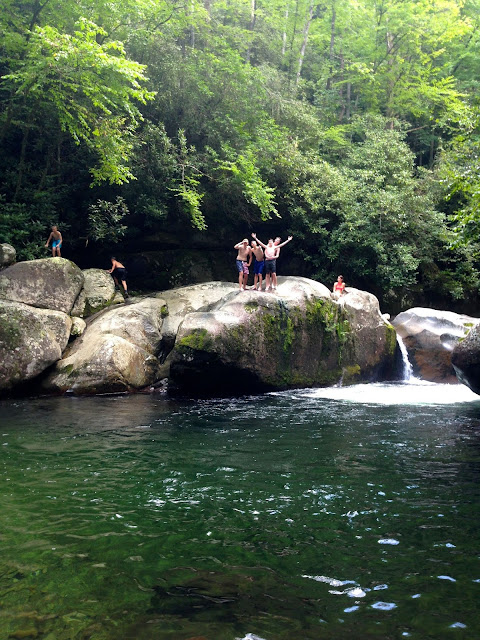 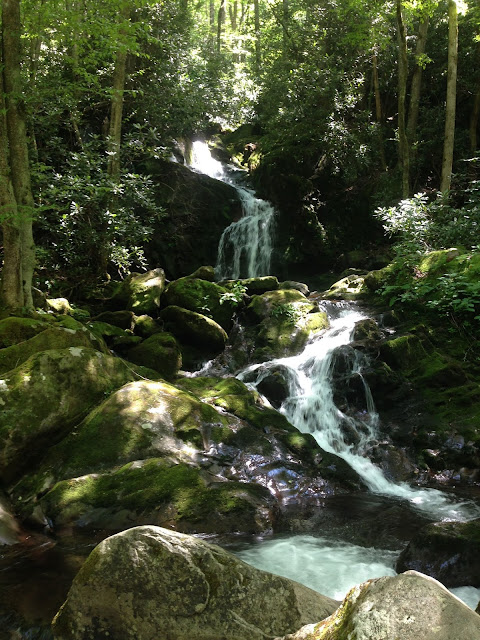 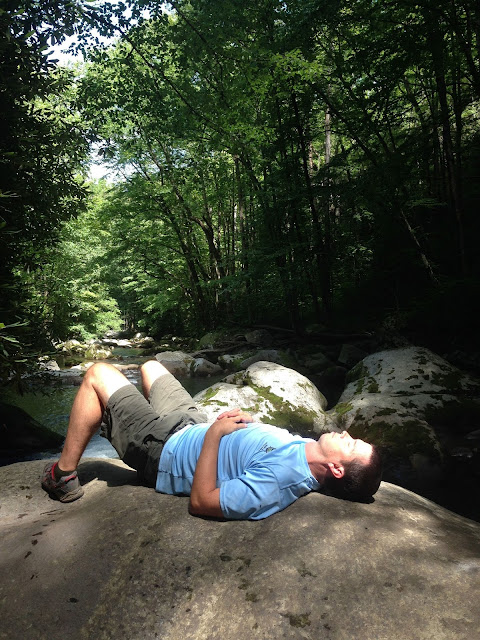 Little River: 4.8 miles
Also in August, a group of us did the Little River Trail again for 4.8 more miles. 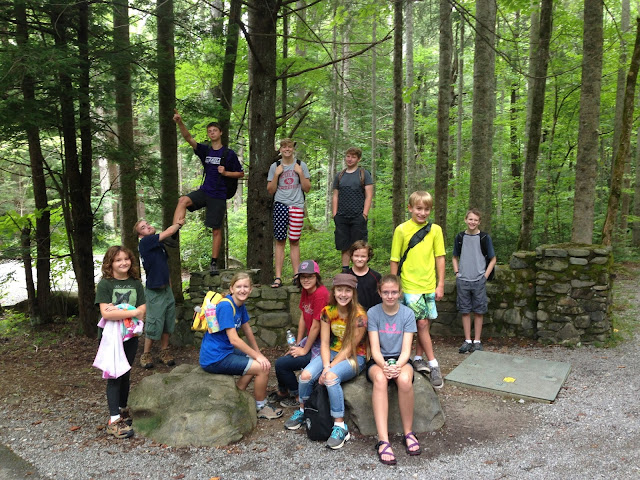 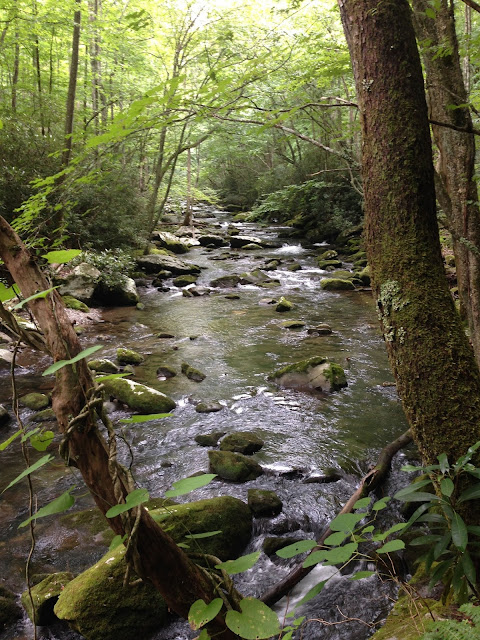 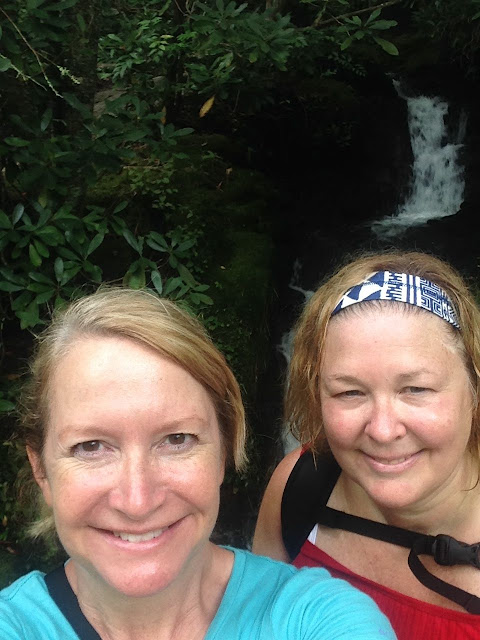 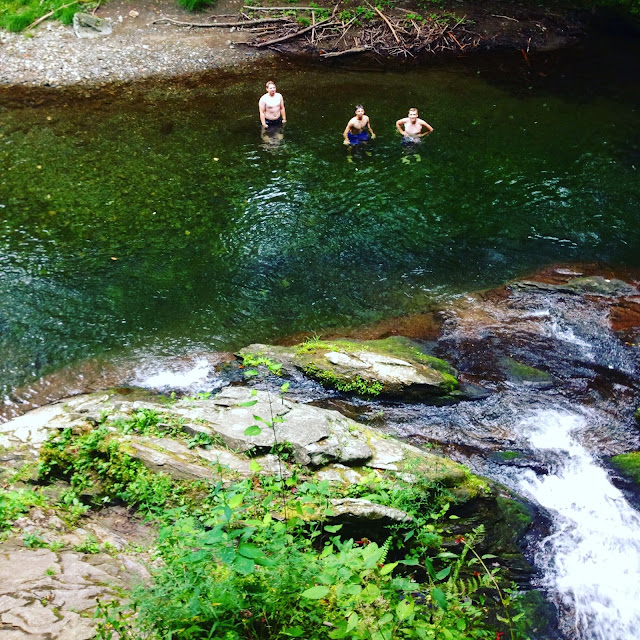 Those were my August and September (so far) hikes for the Hike100.  I'm really loving this Smokies Centennial Challenge and sometimes, even after 17 years, still can't believe I live by this incredible national park!


Linked up with Wordless Wednesday and Outdoor Wednesday
Posted by Sarah @ Sarah at SmallWorld at 5:47 PM No comments: