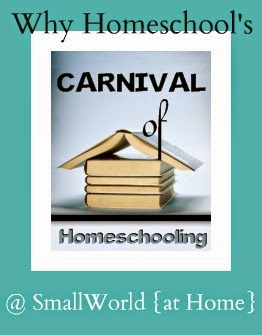 Welcome to the Carnival of Homeschooling! It's a quiet week around here. Our Carnival is small but really, really packed with great articles and plenty of good reading material. Marie-Claire's post alone, the first one below, has links to 31 other articles!

I hope you have plenty of down time in the next week to read a few articles in between baking batches of sugar cookies and wrapping gifts.


Marie-Claire of Quick Start Homeschool shares a month's worth of articles in her 31 Days of Homeschooling Series, addressing all kinds of common homeschooling questions and providing tips and techniques from the trenches. This would be a fantastic resource for the new and potential homeschoolers in your life!

Sometimes in the midst of questioning if we are doing the right thing, it's great to remember why we are doing it! Sara Dennis of Classically Homeschooling lists 51 Reasons to Love Homeschooling.What a great reminder!

And kids have reasons, too! Kris of Weird, Unsocialized Homeschoolers polled her Facebook audience, asking parents to ask their kids why they love being homeschooled and to report back with the answers. She compiled their replies into a blog post, resulting in the 50 Reasons Homeschooled Kids Love Being Homeschooled.

Do you have wigglers, kids who would rather bounce than curl up on the couch? A. Hermitt at Notes from a Homeschooling Mom shares her daughter's story and offers suggestions with Teaching Kids Who Can't Sit Still.

I hope we'd all agree with Michelle that every homeschool should encourage artistic creation. Here is a list of Art Supplies that Every Homeschool Should Have on The Heart of Michelle.

Judy of Contented at Home provides an awesome list of 100+ Free Preschool Printables.

Sara Dennis discusses The Basics of Classical Education, with a great explanation of the three stages, at Classically Homeschooling.

I love this idea for a unit study, suggested by Judy of Contented at Home: Hymn Study for Homeschoolers. This series is designed to make hymn study easy and enjoyable for homeschooling families. Each unit includes all the tools you need to study the hymn: hymn history, lyrics, sheet music, recording of the hymn, copywork and notebooking pages, related Scripture to memorize, and vocabulary words taken from the hymn.

Heidi of Starts at Eight reviews CASHFLOW board game, a game that she says "makes for a fun and educational way to help teach your teens (and tweens) about the world of personal finance. It is like a cross between Life and Monopoly on steroids! Read more about it at Money Management for Teens with the CASHFLOW Board Game.

Alasandra of Alasandra's Homeschool Blog provides a review of the preschool book Have I Told You Today How Much I Love You? by Cheryl Sturm.

ChristineMM at The Thinking Mother shares notes from a book being released next month, The Teenage Brain, about the effects on the brain with so much digital living and video gaming that teens do today.

If you haven't yet, be sure to check out my 100 Not-Boring Writing Prompts for Middle- and High Schoolers. If you have teens, you'll have all the writing topics you need for a long time!

That's it for this week's Carnival! Thanks to the Cates for organizing this fantastic resource each week and for all the bloggers for participating. Submit your blog article to the next edition of carnival of homeschooling using the carnival submission form. Past posts and future hosts can be found on the blog carnival index page.

Email ThisBlogThis!Share to TwitterShare to FacebookShare to Pinterest
Labels: Carnival of Homeschooling, Homeschooling