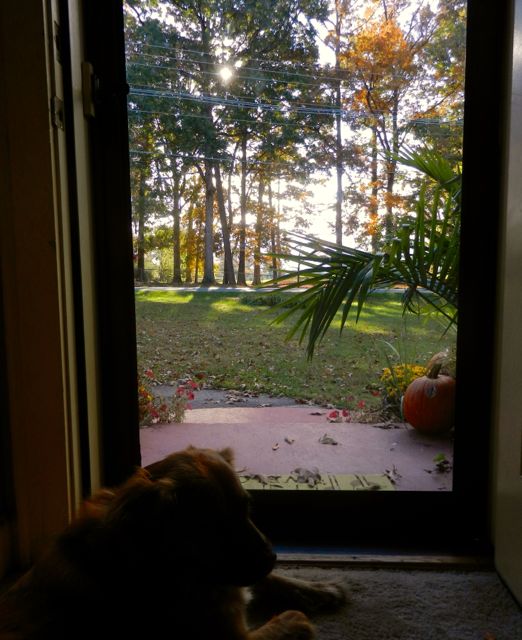 I always open the front door for the animals so that they can have a sunny spot in which to lounge. This morning, after our usual 3-mile run, I was stretching out by the front door with our dog, Autumn, next to me, and I was so delighted in her morning view. She's just a dog, but I think even she enjoys beautiful things: yellow leaves, the early morning sun, a few last flowers. The last day of October.

Posted by Sarah @ Sarah at SmallWorld at 3:57 PM No comments: 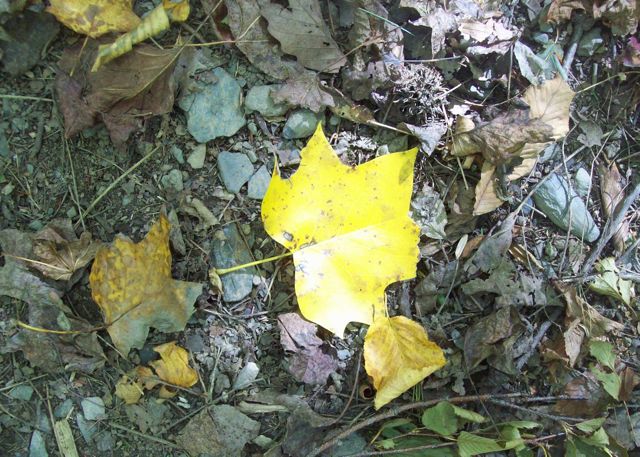 The Love of October

even in death for a reason
that none of us knows
and the wren laughs in the early shade now
come again shining glance in your good time
naked air late morning
my love is for lightness
of touch foot feather
the day is yet one more yellow leaf
and without turning I kiss the light
by an old well on the last of the month
gathering wild rose hips
in the sun.

Posted by Sarah @ Sarah at SmallWorld at 10:13 AM No comments:

I don't receive advance reader's copies (ARCs) from publishers very often. I don't request them generally because I don't have time to read and review dozens of new books every year. But when I saw that Rachel Held Evans was offering ARCs of her book A Year of Biblical Womanhood, I jumped at the chance to get one!

I'm only halfway through the book, but I absolutely love it. I'll be reviewing it over at SmallWorld Reads when I finish, but here's just a little taste.


"Those who seek to glorify biblical womanhood have forgotten the dark stories. They have forgotten that the concubine of Bethlehem, the raped princess of David's house, the daughter of Jephthah, the countless unnamed women who lived and died between the lines of Scripture exploited, neglected, ravaged, and crushed at the hand of patriarchy are as much as part of our shared narrative as Deobrah, Esther, Rebekah, and Ruth."


I'm so happy to have a warm bed and a good book to read this evening!

Posted by Sarah @ Sarah at SmallWorld at 10:02 PM No comments:

A gray, rainy day. A pair of black pajama pants and a sweatshirt. Smart Wool socks. My family at home, safe. Sunday Night Fried Rice. Amazing Race on TV. A pretty dog at our feet and a cat curled up in front of the fireplace.

Sometimes, the beauty comes in the smallest things, the most ordinary settings. I think that might be my favorite kind of beautiful thing.

25 other beautiful things in October here.
Posted by Sarah @ Sarah at SmallWorld at 9:44 PM No comments: 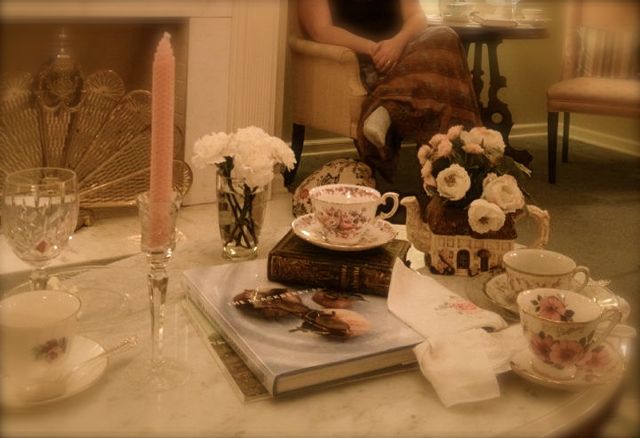 I love my book club. A friend started it a couple of years ago, and it has become one of those things that I never, ever want to miss. Last night we had an honest-to-goodness tea. Our book for October was  The Tea-Olive Bird Watching Society, so a tea seemed appropriate. One of our members is gifted with the giving-tea gene. She a dozen different china cups from which to choose, a few pots of tea, and lots of delicious and dainty cookies and such.

Our husbands think book club is just an excuse to get together and socialize, but in truth, we do talk about the book (which had absolutely nothing to do with tea, by the way). Only one of us really loved this particular novel, but so we discussed all the ways we would have made it better. And we ate a lot. Oh, and we did talk about many, many other subjects besides the novel.

I am so thankful for this group of women, and for books, and especially for gingersnap sandwiches with lemon curd filling. Now that is a beautiful thing!

Posted by Sarah @ Sarah at SmallWorld at 1:37 PM No comments:

Yesterday I had the pleasure of shopping with my mother. Shopping is something we've always loved to do together. Even in the days when I was a teenager and I didn't think my mother liked me very much, we always loved clothes shopping together. She taught me to be a bargain shopper, so we always headed straight for the clearance racks. I can think of few clothing items I have ever actually bought full price.

My mother is 85 now. She aches all the time, from the base of her neck straight down to her left leg. My father does 95% of the grocery shopping, although my mother makes the lists. After our hour's shopping trip yesterday to one store, my mother will probably be in terrible pain today. But she will have said it was worth every ache.

It's not about a new pair of pants or a blue jacket that matches her eyes. The beauty is in the little moments seized while we still can and in the continuing of tradition across so many years. A girl and her mom, shopping.

Posted by Sarah @ Sarah at SmallWorld at 8:56 AM No comments: 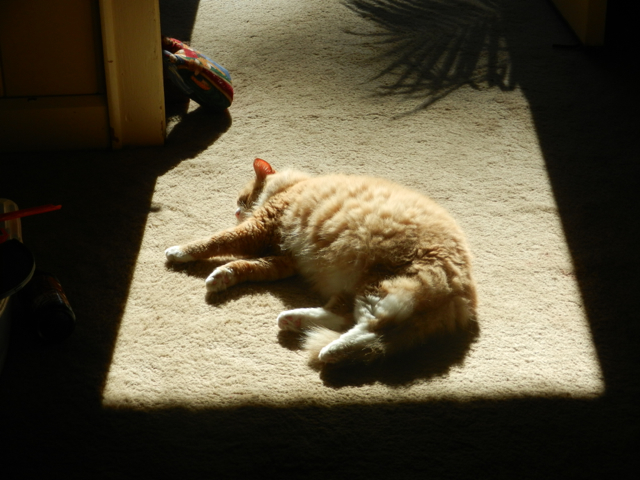 I love having animals about the house. I know, I know. I often complain about hairballs and the smell of the litter box, but really, I love them. Look at that big fat guy soaking up a square of sunshine. These guys know how to appreciate life.

Sweet things. How much richer our lives are because of this funny animals that share our space!

22 other beautiful things in October here. 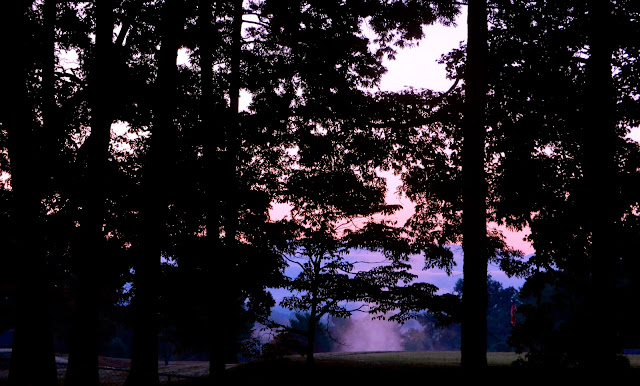 One of my very favorite things about getting older is that I wake up early, not because I have to nurse a baby or because the little ones are up running around. I wake up early on my own, anticipating a couple hours of quiet time before the kids wake up and the daily bustle begins. Every morning I sit in the same place on the couch with a blanket over my legs and watch the sun rise above the mountains. These cool fall mornings I turn on the gas fireplace (it's all about the ambiance), read a chapter in the Bible, and pray. Some mornings I get distracted mid-prayer by a cat meowing or a random thought that pops in my head. I am always trying to be more disciplined.

You'd think a sunrise would be old hat eventually, but every morning I swivel my head again and again to look at the sky. Has the sun popped up yet? What new color has been added to the sky? Some mornings, like today, the morning fog lightly shrouds the mountains, and I imagine myself wading through it.

Used to be I lived on Seneca Lake, and every morning I'd do the same: watch the moods of the lake, the sun spreading diamonds on the surface, the trees in sturdy silhouette. I can't imagine living somewhere without a view to start my day. 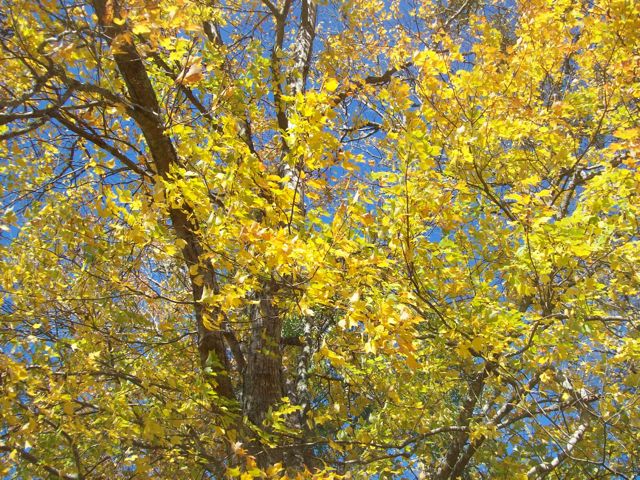 The leaves are out in full glory this week. I can't stop looking at them. This afternoon, after coming home from a long day at co-op, I sat on my bed and watched the sun streaming through the leaves. All I could really see out either window was leaves and sunlight. It made me want to write poetry or bury my face in a pile of leaves, breathing in October. Instead, I rested and read and thought about the perfect comfort of leaves, a fleece blanket, a quiet house, and a kitten curled at my feet.

Back on Day 7 of "31 beautiful things," I wrote about the beauty of a brand-new thing: our new church. But yesterday was one of those days that the old and new came together. Four of us who left our former church at different points came together for lunch. Two of them have been gone 5 or 6 years. We all left in bitterness and with much grief. We had all been terribly hurt by individuals at our former church. That's not the beautiful thing. That's the ugly truth.

But the beautiful thing is that we all know that people aren't perfect, but God is. People hurt each other, but God heals. People break your trust, but God keeps all His promises. And the promise that he'll provide a crown of beauty instead of ashes just keeps showing up in my life. And that's a really beautiful thing.

A night filled to the brim with food, friends, and pumpkins. 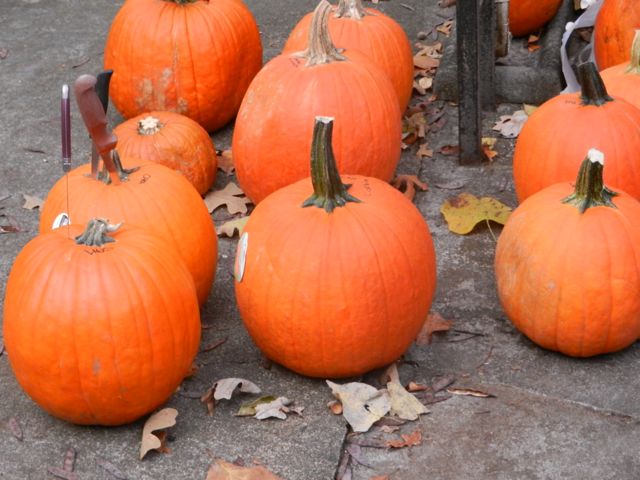 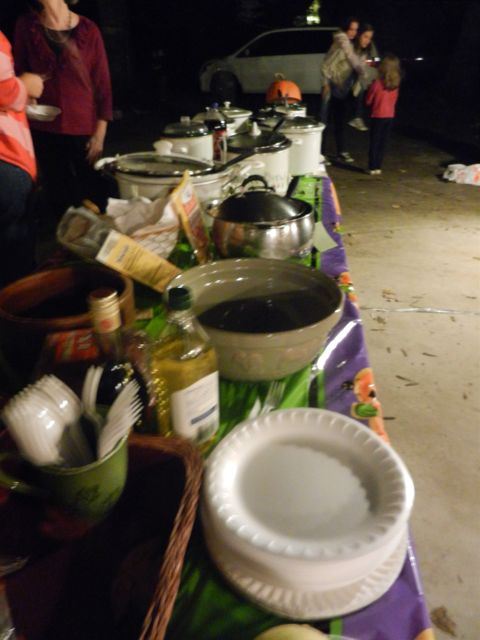 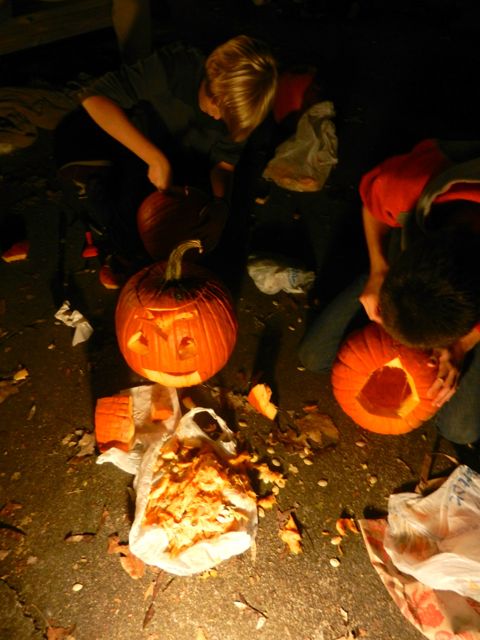 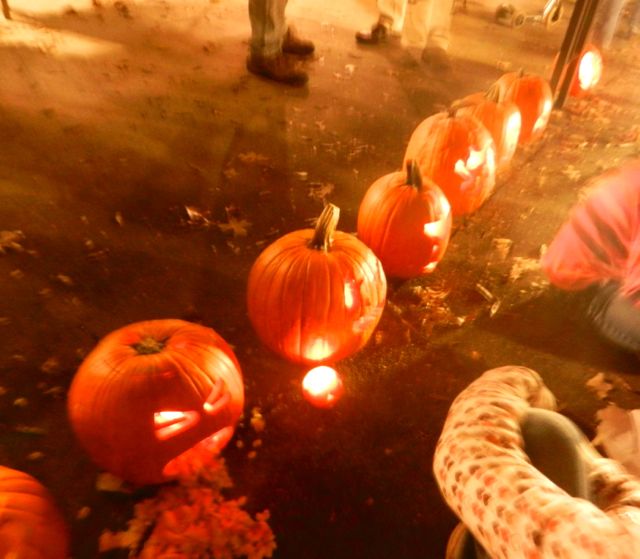 It's probably my favorite event of the year, second only perhaps to Christmas. At the end of the evening we are ready for bed and feeling utterly blessed to be in this village.

Every now and then I come to the end of a day and think, "What was beautiful about today?" And that is what this is really all about: finding beauty even in the humdrum days. I can look outside and see beauty every single second. I can see the Smoky Mountains from my window, for goodness sake. I can look at my daughter and inwardly gasp at how gorgeous she is, how breathtaking. I can feel my sweet boy's head on my shoulder and know what beauty feels like.

Today, I pretty much cleaned all day. Is there anything beautiful about cleaning? I can't even pretend to find beauty in scrubbing the shower or picking fuzz off a dark blue comforter that was washed with a fluffy light green towel.

What's beautiful for me about today is the anticipation: the why of cleaning. Friday is party day! We have a big annual fall party, and in the morning I'll just have a few hours of preparation left to do. I love having a house full of friends. I wish I could invite every single friend I have and even every single acquaintance, but we can only hold so many people in our house and yard.

We started this almost 10 years ago, telling each child they could invite 2 close friend and their families. Well, friends shift throughout the years, but we also made a rule that no one ever gets taken off the list—only new people added. We've lost a lot of people through the years, mostly as they move away physically but sometimes as they've moved away from us and into other friendships, other villages. But we've added a family or two each year, and this year we're especially excited because one of the original families—who have long since moved away— will be visiting and staying with us for the weekend!

And so, while I really can't find anything beautiful in cleaning, I can totally find a beautiful thing in the reason for all the scrubbing and dusting. 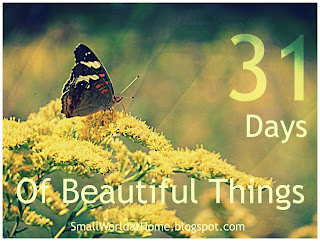 Sometimes, the most beautiful thing at the end of a long day is simply a warm, comfortable bed and the potential for a good night's sleep.

I mentioned two days ago that my daughter and I were both collecting family legends this week, her for American history and me for my writers' group.

Click on the link about for her story about the Civil War table; here's mine about my Uncle Max.