The weeks are flying by much too quickly, loaded with outside activities, commitments, and appointments. I am having that "Aaah! We aren't getting anything done!" panic.

And then I have those wonderful moments, like when my college sophomore says, "You taught me to speak and write well, but you never taught me parts of speech." Can I please pound him in the head? Seriously?

And then my ten-year-old, in the midst of a game of Pictionary in which the answer was "Oregon," shouts: "How should I know where it is? I don't know any of my states!" Oh heavens. Of course the child has been taught his states. Not only have we been through 3 years of U.S. history with a geography component, but he's taken a 50 States class twice at our co-op.

Why do I feel the tremendous need to defend myself? Or better yet, lock myself in my room with a bag of caramels, tortilla chips, a glass of wine, and TV reruns on my laptop? And lots of fluffy blankets and pillows.

Anyway, I know everyone goes through these times of self-doubt and teaching angst. Here are a few things we have been doing around here lately. You'd better believe I'll be teaching subjective pronouns next week.

Duncan and I are still studying Japan, now reading Commodore Perry in the Land of the Shogun. We have also:
* Made chicken yakitori, Japanese crescent cookies
* had a Japanese tea ceremony
* added to our Japan lapbook (the finished product will be coming up soon)
* watched videos on samurai, tea ceremonies, and various martial arts
* listened to stories from my Dad about apples in Japan and about his R&R in Japan during the Korean War

Everything else continues with Duncan as usual: math, handwriting, spelling, grammar. His science classes are at our co-op, as well as drama, Shakespeare, and literature circle. We are nearly done with The Phantom Tollbooth in our literature circle class, and we have had a blast with that.

Laurel, 9th grade, keeps working diligently in all her classes. She is thrilled to be done with the Excel portion of her computer class; this week they began the Powerpoint section. In my British Lit co-op class, we began all things Shakespeare. I divided up all kinds of topics on the Renaissance, Shakespeare, and the Elizabethan era and had the kids give oral reports on the topics. I loved hearing all the tidbits they came up with! We'll be studying Romeo and Juliet for the next few weeks.

Apparently I haven't taken any photos of what we've been doing in school the past few weeks, so here are a couple of pictures from the hike that our teen group went on recently. 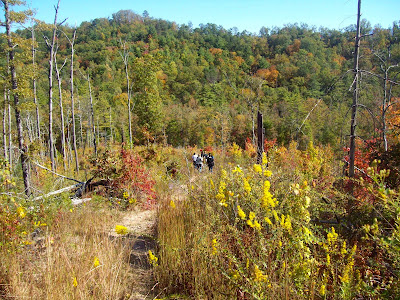 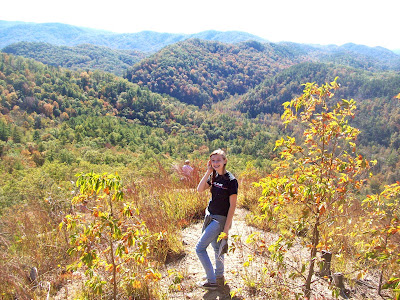 In other homeschooling news, I've had a few other things going on:
* My first WordSmithery (creative writing) addition in a long time
* I hosted the 303rd Carnival of Homeschooling
* Wrote an article about Making Books in Your Homeschool for The Homeschool Classroom
* Discussed My Biggest Homeschooling Mistake at Simple Homeschool

Now, I'm off to clean my house in preparation for our annual Soup and Pumpkin party tomorrow!

Linked up at the Weekly Wrap Up
Posted by Sarah @ Sarah at SmallWorld at 11:00 AM