Monday Miscellany, Mostly About the Rat

* There are some things I never thought I'd have to google, like "how to catch a rat." And yet this morning, I found myself googling just that in hopes that I would stumble on something, anything that Randy hasn't already tried. I may have hit upon it with this one: "hammer nails into a trap so that points stick upward and put rotten pumpkin on the trap." Just so happens that we have a rotting pumpkin on our front porch. I mean, why not?

* Yes. We have a rat behind our dishwasher that is completely disrupting our lives. Yes, we have cats. They are extremely helpful. This one sits on the counter and stares at the wall when she hears the rat. 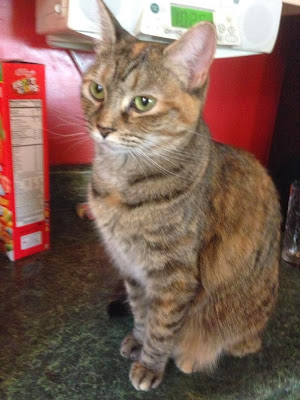 And I am so traumatized by the rat that I don't even care that the cat is on the counter. (For the record, the other cat and the dog appear oblivious to the rat.)

* Yes, we've had the exterminator in. He said all he'd do is set more traps and charge us for it. After a week of more traps, we have decided to call another exterminator. Did I mention that our house is beginning to smell like a giant hamster cage?

* But enough about the rat, which basically consumes my every thought. Let's move on to the snake. Apparently, Randy thought this would be a perfect time to buy a pet snake for Duncan. I am pretty sure his thought process went like this: "she is so traumatized by the rat that the snake won't even bother her." Strangely, he was correct. Maybe when the rat is gone, I'll slowly realize that there is a snake living in Duncan's room—in a glass cage, of course. But most likely I'll be so busy sanitizing my house again and again and again that I will forget about it. * For a bit of non-animal related news, Jesse comes home from his semester abroad in Italy in less than a month! I am so ready for him to be home. He appears to be having a fabulous time and has been quite good about posting pictures of his travels on Facebook. I am so happy for the experiences that he is having!

* Today is our last day of K-8 co-op until January. This semester went by quickly; I am usually completely burned out by now. I do still have two more weeks of high school classes after this week, but I'm done teaching my middle school English class for now. More importantly, Duncan is done with all his classes except for algebra, his one high school class.

* And so the day begins. The windows are open, the sun is filtering through the last of the yellow leaves, and the mountains are periwinkle. I an almost forget for a minute that we have a rat lurking behind our walls.

Hope you have a great one.

Posted by Sarah @ Sarah at SmallWorld at 7:53 AM

Email ThisBlogThis!Share to TwitterShare to FacebookShare to Pinterest
Labels: musings