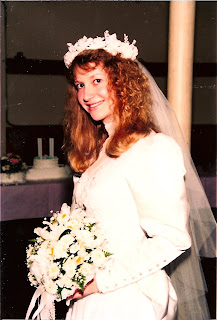 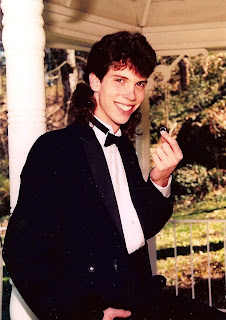 There we were, nearly 20 years ago, counting down the minutes until we were really, truly married.

And here we are, 20 years later, counting down the days until we are really, truly going away by ourselves. Every now and then Dr. H. and I go out on a date, usually to a concert or out to dinner. But we're pretty sure we've only been away overnight (without kids, that is) once or twice since we had kids, and one of those times was when we went to look for a place to live—in Iowa. So that was about 14 years ago. We're not sure when the other time was, so we're not even sure there was another time.

But this weekend we are going away. The kids are being farmed out to friends, and we have a nice little cabin reserved in the Smokies. Not in Gatlinburg, mind you, but on the Peaceful Side of the Smokies. (That's Townsend, for those of you who aren't local yokels. Think Christy.) We could go far, far away, but when you 20 minutes away from a place that's beautiful beyond description, why waste time traveling?

But if we had a week or so and plenty of money, we'd be going someplace tropical. Or Scotland. Or Australia.

I'm going to make it really easy on you this time. For Part 2 of our 20th Anniversary Bash, all I want to know is: where would you go for your 20th anniversary get-away? Or if you've already had your 20th, where did you go?

All you have to do this time around is leave a comment here, and you'll be entered in the contest. I'll be drawing the winner, by the way, next Monday. After we get back from our get-away weekend.
Posted by Sarah @ Sarah at SmallWorld at 9:39 PM