First Annual Festival of One Act Plays: A Memory

Twenty-five years ago I wore a lavender sweater with a lace collar and a flowered three-tiered skirt and made my stage debut. I was "She" in the John Guare play "The Loveliest Afternoon of the Year." Chris S. was "He." My friend Randy Landry was the director, and Dave King played the guitar and sang "Moondance" and "I've Just Seen a Face" as he sat on the edge of the stage. 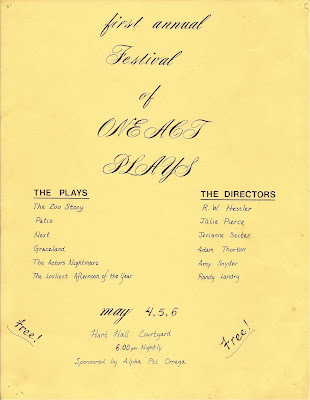 It was the first annual Festival of One Act Plays at our college. I was a junior, and that semester had been a difficult one for me emotionally. That was my "black semester": I was depressed, bitter, careless, hardened. I had always been a pretty happy person, but I was losing myself, trading optimism for cynicism, looking for cold alleyways instead of spacious places.

I cannot say that One Acts altered the direction of my life. I did not go on to have a long and illustrious acting career; in fact, I have never been on stage again. But One Acts marked a change in me.

The evening was warm. The grassy courtyard was filled with students on blankets, wearing shorts and t-shirts, facing the makeshift stage. The air was thick with anticipation and honeysuckle. Everything was exactly right.

Anger and disappointment had been whittled away in those weeks of rehearsals. I had a focus. I was an actor. I got to kiss Chris Sloan, who was actually a pretty good kisser. Life suddenly became…lovely. I stepped outside my comfort zone and found a voice I'd always known was there.

Twenty-five years ago I was a girl with a broken heart and heavy sighs, and then I wore a lavender sweater and a flowing skirt and became "She." For a long time after that play, I wanted to act again. Even now I think sometimes, "I have that in me." I remember how it felt, to become someone else.

I knew the magic of the stage, the act of being and becoming and ultimately returning.

For 25 years now the Festival of One Acts has been happening at my alma mater. Randy Landry and Adam Thornton, two of the first year's 6 directors and two of my closest college friends, have passed away. But in my mind they are there, Adam in his ripped-up jeans, Randy with his funny voice and soft hair. I think they were happy then, too, on those warm evenings in May.


Linked up with Amy's Finer Things Friday
Posted by Sarah @ Sarah at SmallWorld at 8:14 PM