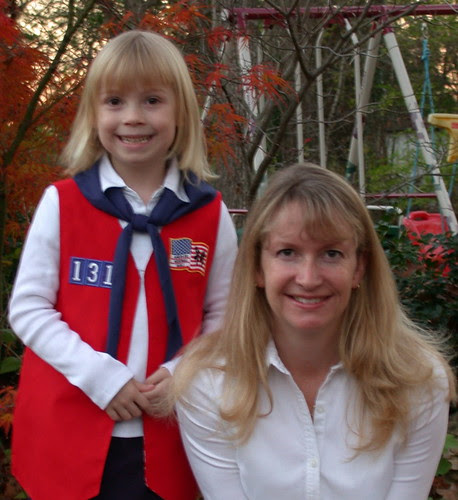 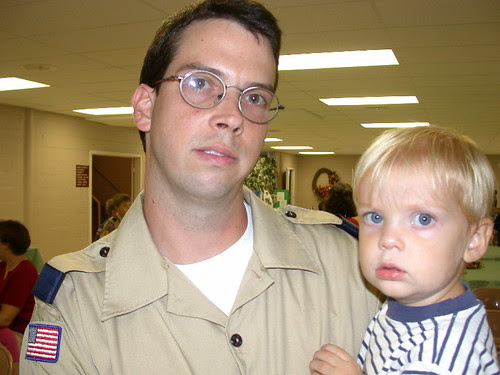 This week begins our the first of our many Scouting weeks. Every 2nd and 4th Thursday and Friday of each month we dedicate to scouting in SmallWorld. Thursday afternoons, our American Heritage Girls troop and Cub Scout pack meet; Friday nights are Boy Scout meetings.

I don't remember ever making a decision that we would be a Scouting family. My own father and brothers were big into Boy Scouts and my mother was a Den Mother. I did my own stint in Brownies and Girls Scouts for a couple of years. Randy spent a few years in Boy Scouts. I guess it was just natural that Scouting would be a priority in our family life, so we signed Jesse up for Tiger Cubs as soon as he was eligible.

We are blessed to have our Cub Scout pack (and Boy Scout troop) chartered through our homeschooling support group. Homeschooling parents show a tremendous dedication to Scouting. Randy was the Cubmaster of our pack for three of Jesse's four years as a Cub. He then passed the torch and became an assistant scoutmaster in Jesse's Boy Scout troop. And now he is picking back up again as Duncan begins his journey in Scouting. It seems like a long, long time ago that Duncan was that little toddler in Randy's arms and that Jesse was a Cub Scout.

And it also seems like a long time ago that we began American Heritage Girls troop, the first in Tennessee, in 2003. You can read all about our Scouting journey here and more extensively in the Summer 2007 issue of The Old Schoolhouse Magazine. My little first-grader in the photo above is now a 5th grader (and my hair is way shorter!). These past four years have been absolutely amazing, and I anticipate that our fifth year will be just as sensational in so many ways.

Jesse has been in Scouts (Cub and Boy) now for nine years (lots of pics here), and he has just two ranks left to earn to be an Eagle Scout. I can't even begin to calculate the number of hours he and Randy have devoted to Scouts. And the experiences they've had together and with the troop--incredible! From this past weekend's rafting trip to the 34--mile Virginia Creeper bike trip to sweaty weeks at camp to rain-swamped camporees--they have created a lifetime of father/son memories through Scouts.

Our lives become crazier and more chaotic now as our various scouting activities kick into high speed, but I wouldn't trade these days for anything. Now if only I could get Jesse to cooperate so we could get our family picture with all of us in our uniforms (now WHY would a 14-year-old be horrified by that thought?)!
Posted by Sarah @ Sarah at SmallWorld at 9:55 PM