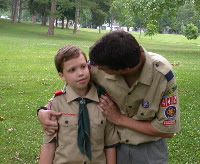 When Jesse was a Cub Scout, many years ago, Randy was our pack's Cubmaster. He resumed the Cubmaster job this year when Duncan entered Cub Scouts, and last week was the end-of-the-year pack meeting and crossing-over ceremony, during which the 5th-grade Cub Scouts cross-over into Boy Scouts. It's a beautiful ceremony, and it was one of those times when I'm acutely aware that my children are growing up. It's hard to fathom, really, but it was just four years ago that my lanky, curly-haired teenager was the sweet new Boy Scout in the photo above. So much changes in four years in the life of a child. From two-to-six: toddler to reader, three word sentences to a rich and varied vocabulary. From seven-to-11: Green Eggs and Ham to Lord of the Rings. From 11 to 15: eight inches of height, eight inches of hair, and an even more extensive vocabulary. Grapes of Wrath and the ACT.

But still the same kind, funny young man, with the gentle smile and green eyes. Moving now, closer to Eagle Scout. And now he's the one welcoming this new Boy Scout into the troop, putting on the new neckerchief and epaulettes. 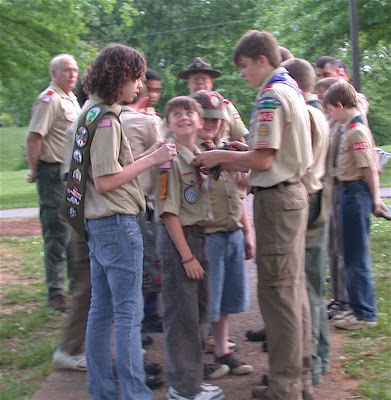 Posted by Sarah @ Sarah at SmallWorld at 8:48 PM