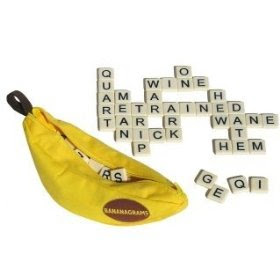 At least a few times a day, Dr. H. and I play a game on Facebook called WordTwist with a college friend, Laura. (For the record, she beats me pretty much all the time, and she beats Dr. H. much of the time.) So last week she sent us a fabulous surprise in the mail: the game Bananagrams. My 11-year-old daughter and I were headed off for a long performance weekend, the vast majority of which was to be spent waiting patiently in the green room. I stuck Bananagrams into her bag, thinking it might help pass the hours away.

I had no idea just how much attention the game would attract! Kids of various ages instantly gathered around as Laurel and her friend Caitlin began to play. Moms came to check it out and asked what it was and where they could get it. I had to sit down and play with them, too, as I find word games irresistable!

Basically, Bananagrams is like Scrabble, except that you aren't confined by a board, you work independently, and you don't score according to the value of the letters. The object of the game, as the directions say, is to work quickly to use up all your letters in your own crossword puzzle and then yell "Split!" and you and the other players pick up another letter. You keep going until all the tiles are used up, and you then yell, "Bananas!"

Of course, we instantly altered the rules to fit our needs. You can do this in endless ways. One time we set a 5-minute time limit, so that whoever had used the most tiles at 5 minutes, won the game. The girls wanted to play by using proper names, so we tried that way. You can also be category specific, as in creating only animal words, or kinds of food, etc.

I wasn't anticipating what a great game this would be for my second-grader. He and I play a low-key version of the game. I'm flexible about allowing him to trade in tiles, and I give him hints at words he might make. He absolutely loves it and has been begging me to play. I was thrilled to see how good his spelling is, too! This would be a great game to use in all kinds of ways in homeschooling: spelling, vocabulary, language arts (make words that are nouns or verbs or adjectives, for example).

Another great thing about the game: it comes in a small zippered, banana-shaped pouch which could easily fit in a purse (or a Christmas stocking!). This would be fanastic to bring with you whenever you are going to have to wait. The great thing is that not only do the kids love it, but I love playing it, too!

Really, this is a multigenerational game that you could safely give to anyone on your Christmas list, from age 6 through grandparents. It will be a huge hit!

(And thank you again, Laura!)
Posted by Sarah @ Sarah at SmallWorld at 1:15 PM