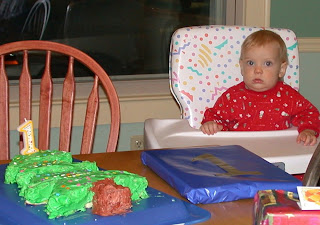 I have a Christmas baby. An honest-to-goodness, born-on-Christmas-Day boy. That's him on his first birthday, seven years ago. I miss that baby face.

Birthday parties are always a challenge with a December birthday because we're all so busy with Christmas activities, but I've always had a good party for Duncan. We've had an assortment of themes, including knights in shining armor, dinosaurs, army, and I forget what else; but this year I took the easy way out and—at Duncan's request—had his party at a local gymnastics center where he does a weekly class. Lovely. I needed the absolute simplicity this year of having someone else do the party. All I had to do was make the cake and assemble the goody bags. 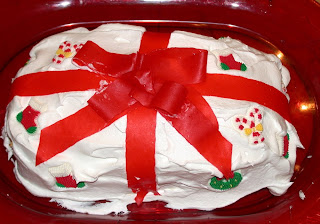 I was very pleased with the cake, for both the ease in making it as well as its obviously stunning appearance. The recipe for this ice-cream cake is at the Breyers website, and I highly recommend this. I do, however, suggest that you keep in mind that a freezer is necessary to keep the ice-cream cake, um, frozen. Unbelievably, the gymnastics center did not have a freezer that could accommodate an ice-cream cake. It began to resemble a somewhat soupy ice-cream sundae shortly after Duncan blew out the candle, but it was tasty anyway. 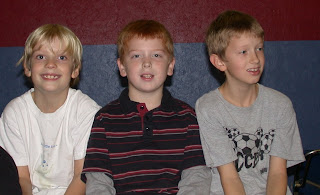 Here's my birthday boy now. That's Ezra next to him; his mom and I were pregnant together, so they have been together since before birth. And Patrick next to Ezra, who used to look just like Christopher Robin. 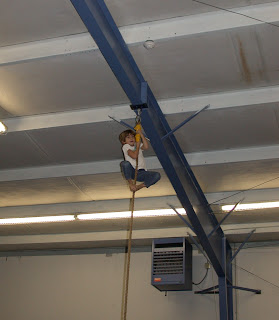 This is the amazing Noah, who can do 10 back handsprings in a row, shimmy all the way up the rope, and leap over tall buildings. He may be small, but he is powerful! 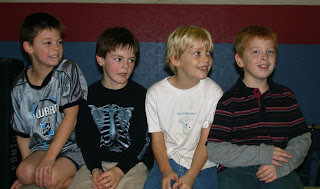 A bunch of hot, sweaty, smelly boys and one sweet little girl came to the party. The other little girls who were invited couldn't come, and I was impressed this girl got right in there and played with the boys. If Duncan weren't already betrothed to someone else, she'd make a great wife. I like girls with a little spunk.

I would have had more pictures, but my battery died. Of course.

As a special treat, Duncan got to have his friend Caleb spend the night. They played without ceasing for hours and hours and actually fell asleep at a decent hour. And after birthday party day, I actually feel relaxed.
Posted by Sarah @ Sarah at SmallWorld at 10:33 PM