Today Really Is Our Anniversary 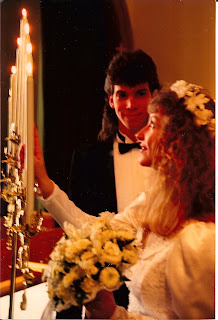 You've probably realized by now that we in SmallWorld like to have l-o-n-g celebrations of milestones, and 20 years of marriage is a major milestone. But this really is probably the last post about our 20th anniversary. Tomorrow I'll get back to posting regularly about fascinating topics like dead rodents.

I love what I gave Dr. H. for our anniversary, so I'm going to tell you all about it. While he was away at Cornell U. giving a seminar and eating at delicious restaurants, I was at home frantically scanning photos and going through every single letter and scrap of paper that we ever wrote to each other. Amazingly, we both saved everything, even though we broke up a lot, once even for 8 months. I also read through my journals and emails that I'd saved. I pulled out all kinds of quotes from these writings, like this one written soon after our engagement in 1988, when I lived at home in New York and Randy lived in Johnson City, TN:

"I hope you like the earring. I got a pair at the Cupboard in Cincinnati and I've got one in my top hole, so you'd better wear it. They're our engagement earrings!"

I know my friend Julie will appreciate that one. And this one, written by me to Randy when we were students at Milligan College and newly dating:

"I know that soon there well be the time when we'll have the rest of our lives to be together… really together."

I had no idea what that meant back then, but I knew that he was the one.

Eventually, I narrowed the photos and quotes to 35 pages in a Shutterfly photo album/journal. I took us on a journey in words and pictures across 23 years from 19-year-olds to college graduates to new parents to 40-somethings. And I was soooo glad that the book arrived in the mail in time (barely) for me to take it on our anniversary weekend trip.

We cried a lot.

And, really, this is the last time I'm going to blog about our anniversary. But I just want to say that my cup truly overflows. I am blessed beyond measure. I'll end this the way I ended our book, with a quote from my journal in 2002 that really says it all:

"My life is so much better than my dreams ever were."

Posted by Sarah @ Sarah at SmallWorld at 1:00 PM