In the Treasure Box 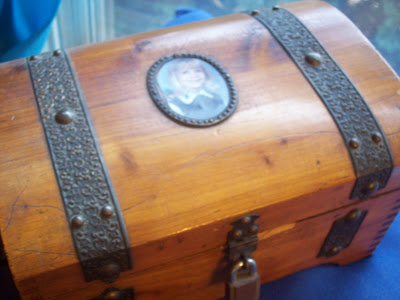 Yesterday as we were finishing school, Laurel pulled this treasure box off the bookshelf. I brought this back with me from my childhood home a couple of years ago and haven't looked at it since. 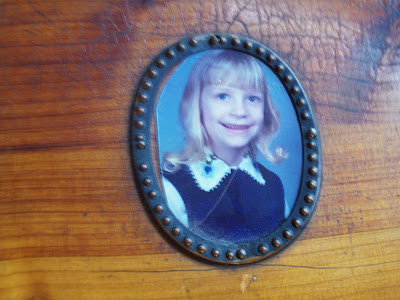 I don't know the history of the box or when I claimed it as my own. I wish I did. I put my first grade picture in the frame at some point. I remember that dress so well, the way the fabric was soft, faux velvet on the top and stiff underneath. I'm glad I chose that picture instead of my kindergarten photo, when I felt the need to smile like a toothless granny.

Of course we got distracted from our schoolwork and had to look through the box. My kids love this kind of thing. 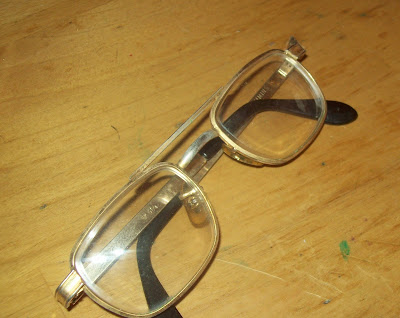 We found my first pair of glasses, which I got in third grade. Duncan noticed that my name is engraved on the side; Laurel tried them on and said they matched her prescription exactly. Not that she would ever wear such hideous glasses, of course. 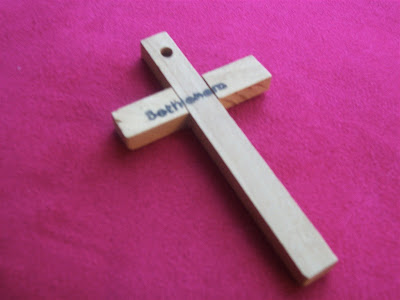 My parents went to Israel when I was four, leaving me and three of my brothers in the care of my grandparents. I missed them. They brought back this cross and lots of wooden figurines, which I gently played with until the clay pot fell off the lady's head and my mother put them away. 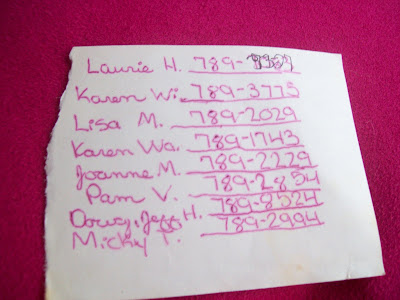 A list of phone numbers from sixth grade. I can tell this is sixth grade because my old nieghborhood friends are on the list as well as new friends from my new school. In sixth grade we moved mid-year from the town to the country, and I had to change schools. The only person that I'm still in touch with is the one at the top of the list, Laurie (now Laura). Facebook is awesome like that. 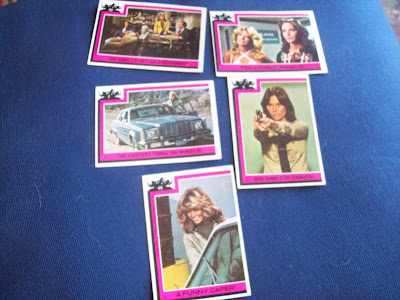 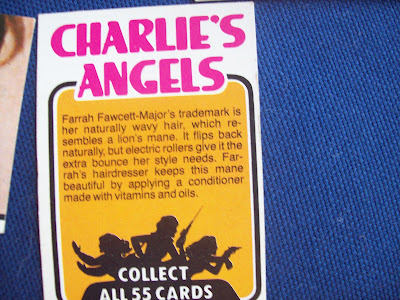 Charlie's Angels cards. I know. These are really too amazing to comment on. 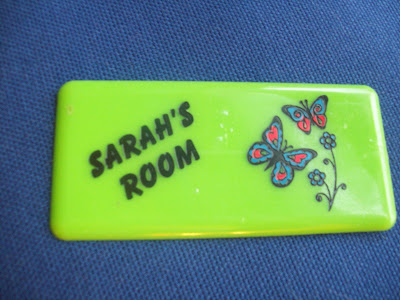 I stuck this on the door in my new house. My parents actually sanded, stained, and polyurethaned all the woodwork in our house, including the doors. I'm sure my mom appreciated that plopped this beauty on the door. Twelve-year-olds (especially ones who are very angry about having to move to a new house) are thoughtful like that. 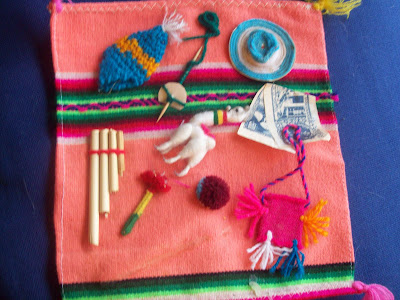 My second brother went to Bolivia at some point when I was in high school and brought this back for me. 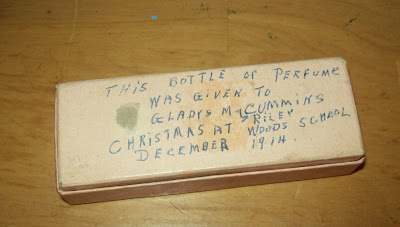 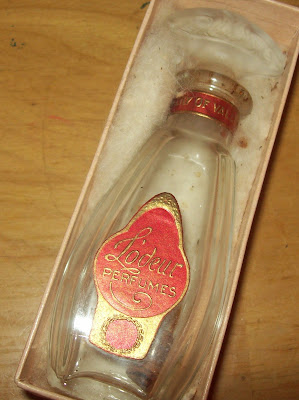 This bottle amazes me, and I'm so thankful that my grandmother was the kind of person who recorded things like this. I have other family pieces that have a little history recorded by her, including a sampler that came through 10 generations of Cummins women to me. 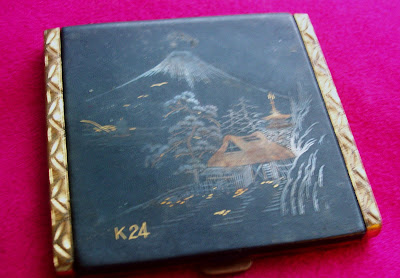 My father brought this compact back to my mother after he served in the Korean War. He also brought a complete set of china while he was on R&R in Japan, but my mother still uses that. 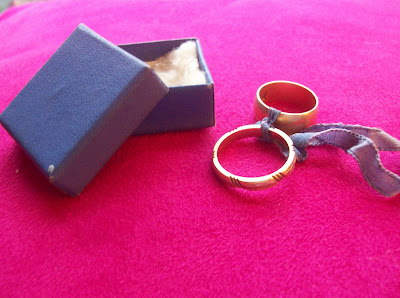 This is the one mysterious item in my treasure box: a set of wedding rings. I have absolutely no idea where this came from, nor does my mother. I suspect that they may have belonged to my grandmother's parents; yet she typically recorded the history of such items. Hmmmm… 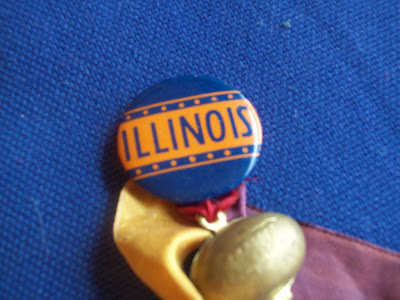 Illinois. Although I grew up in New York, my people are really from southern Illinois. Generations of Cummins, Rileys, Firebaughs, and Johnsens lived and still live in and around Mt. Vernon and surrounding towns. My own parents were in their early 40s when they moved our family to New York from a lifetime in Illinois, and I thought of Illinois as my true home for much of my childhood. My parents met and graduated from the University of Illinois, and I can still sing its fight song. This pin brought a vivid memory of driving from New York to Illinois at Christmas time, listening to my parents sing "We're loyal to you, Illinois/We're orange and blue, Illinois…" 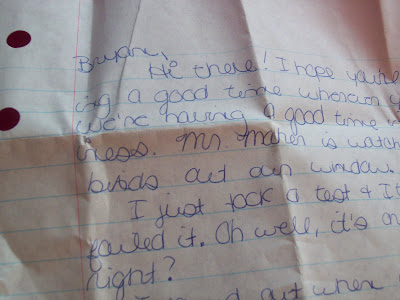 A note to my first boyfriend. He used to always say, "Write me a note." I thought that was a silly thing since I saw him between every class, but I knew somehow that I had entered the world of boyfriends and had to write notes. I'm glad I have this. I wish I had all the notes I wrote to him. 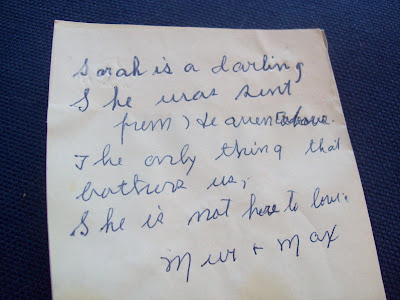 I think this is my favorite treasure in the box: a note from my other grandmother, my mom's mother. "Sarah is a darling; she was sent from Heaven above. The only thing that bothers us; She is not here to love." We called her "Mur"; and she was so precious. Sometimes I see my grandmother in my mother's face now, and it makes me both happy and sad.

I'm glad for my kids' sake—and for my own—that I've kept some treasures through the years. I have a big box in the hallway right now that's filled with treasures from the past 10 years. I know I should put it in the attic, but every now and then I walk by and drop something inside: a drawing, a newspaper clipping, a diaper pin. Someday, I'll be glad for all the times I tripped over that box in the dark.

Posted by Sarah @ Sarah at SmallWorld at 1:05 PM

Email ThisBlogThis!Share to TwitterShare to FacebookShare to Pinterest
Labels: memories, Mom and Dad