I've been wanting to go to the Titanic Museum in Pigeon Forge ever since it opened last spring, and we finally had the opportunity last week. It was absolutely fantastic!

Visitors are not allowed to have cameras, so I took a couple outside before we went in. Too bad that dumb machine was there… 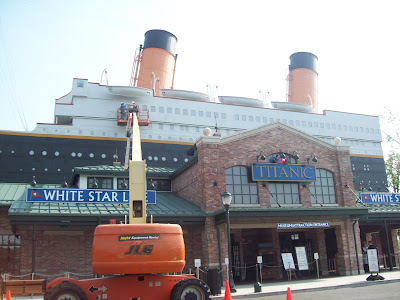 My parents were able to go with us, which was wonderful! They've also been drooling about the museum for the past year. 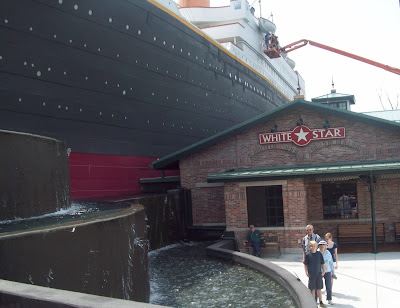 The kids and I had just spent a couple of weeks studying all about Titanic, so we were very familiar with what we were about to see. Here is our Titanic Unit Study. I highly recommend familiarizing yourself and your kids with the story of the disaster before visiting. The museum would be interesting on its own, but I think it was tremendously enhanced because this was like all of our reading and DVD watching come to life, in a way. We also visited the Education Guide that is available on the museum's website and carried the scavenger hunt with us to do at the museum. If you do nothing else in preparation for a visit, at least do this!

Upon entering the museum, visitors get a boarding pass that tells the story of a real passenger on the Titanic. At the end of the tour, you get to see if "you" survived. Of course, the chances are pretty good that your person dies, since fewer than half of the passengers lived. Be sure and prepare your child for that if s/he is sensitive to such things. (My daughter's person lived, my son's died. He was not the slightest bit traumatized, but some kids might be.)

The museum itself is the story of the life of Titanic—conceptualization, building, outfitting, sailing, sinking, and unburying—and of the people whose lives were forever changed by it. We did the new audio tour (additional cost), which I highly recommend. This gadget gives you special stories about the various displays that you see and has both an adult version and a kid's version. My 13-year-old and I loved this. My 10-year-old listened to about half of it and then found more entertaining things to do. My parents (in their 80s) did not benefit from it. They both wear hearing aids and found that they would have to remove their hearing aids in order to hear it. That was too much trouble for them.

Each room is filled with myriad photographs, artifacts, letters, reproductions, and fantastic explanations of what you're looking at. Some rooms have actors/crew who explain what you're seeing and give you extra stories. Probably my only complaint about the museum is that I couldn't understand two of the main crewmen. They did not articulate well, and as my father says, "They were mumbling." He says this about everyone, but in this case, I really couldn't catch most of what the guys were saying. Fortunately, I had that handy audio tour!

Duncan, age 10, rushed through the museum rather rapidly until he go to the hands-on areas (i.e., the disaster itself). He spent a long time touching the iceberg replica and seeing how long he could keep his hand in the 28-degree water. He also loved the room that shows how far the deck tilted and challenges you to keep your balance. Here he could also send an SOS signal and practice tying knots. This was definitely the highlight of the museum for him!

While he rushed ahead with my parents, Laurel and I took our time seeing as much as we could through the third and second class areas. I got to learn quite a bit about my passenger, who was married to the only black man on board. Because they were an interracial couple, they had to sail second class, even though they could easily afford a first-class ticket. Their whole story was fascinating.

One of my favorite parts of the museum was the Father Browne Gallery, which showcases dozens of the only photographs taken during the Titanic's passage from Southampton to Ireland. Father Browne did not make the entire voyage (he got off in Ireland), and these photos were found some 75 years later after his death. Amazing!

Eventually we went up the Grand Stairway to the first-class exhibit.

Phot0 by cliff1066™
The first room you see there is the stateroom made famous in the movie Titanic. The luxury enjoyed by the rich was truly amazing, especially after coming up from the 3rd and 2nd class rooms. So many fun things to see there: china, Mrs. Astor's actual life jacket, a tattered deck chair, lots of letters. And much, much more.

After making our way through the first-class rooms, we finally found Duncan at the scene of the disaster (no surprise there). We visited the bridge, where the actor playing Captain Smith mumbled. Fortunately, we had plenty to read and listen to there and in the other disaster rooms. I loved the checker and cribbage boards made from the actual wood of the Titanic.

Eventually we came to the end, where we could find our passengers' names on the wall to see whether ours had survived or not. This was sobering, especially to see how many men lost their lives.

We ended up in the gift shop, where of course each child bought a Polar, the Titanic Bear. We loved that book.

I give this museum a big two-thumbs up. If you are making a trip to Gatlinburg, don't miss it! Again, I recommend studying about Titanic before going. Also, be sure to go when the crowds are smaller. I've heard that it gets very stuffy with big crowds, and I can imagine that would be true. Avoid summer and spring breaks (generally March), if possible. Next April, by the way, is the 100th anniversary of the disaster. What a great year to go!

(In case you are closer to Missouri, Titanic: Pigeon Forge, TN and Titanic: Branson, MO are both owned by John Joslyn and Mary Kellogg-Joslyn and have similar displays.)

Linked up with Field Trip Friday at Live the Adventure
Posted by Sarah @ Sarah at SmallWorld at 2:34 PM