I first created a unit study about Titanic many years ago, when my oldest son was about 9 and his brother and sister just little ones. Eight or so years later, we revisited the Titanic, this time with my youngest son at age 10 (the oldest is now 18). Click here to see our original Titanic unit study. It's much longer and goes into more detail. We did an abbreviated version this time around, with our last two now in 4th and 8th grades. 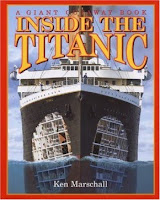 Reading
There are absolutely dozens of what look to be excellent books written about the Titanic. Here is a list of 225 of them on amazon.com. Below are the ones that we read.
* The Titanic: Lost and Found (nonfiction, easy reader)
* You Wouldn't Want to Sail on the Titanic! (nonfiction)
* Inside the Titanic (Giant Cutaway Book)
* Polar: The Titanic Bear. This is the true story--told from the POV of a stuffed bear--of one family's experience on the Titanic. This is such a wonderful story, with so many topics for discussion. Note especially the lifestyle of the rich and famous in the early 1900s.
Activity: Write a story from the POV of a favorite toy.
* Titanic: The Story of the Disaster in the Newspapers of the Day. This is a wonderful collection of newspaper articles dating from the launching of the Titanic through the sinking and its aftermath. It is very interesting to note, on the first several pages, how inaccurate the reports were. (This is a good time to discuss—briefly—how we can't always believe everything we read!)
* The Heroine of the Titanic. This is a fun story about Molly Brown.
* On Board the Titanic by Shelley Tanaka. This is a really excellent, comprehensive book about the disaster, told through the eyes of Jack Thayer, first class passenger, and Harold Bride, assistant telegraph operator.
* Titanicat by Marty Crisp. A true story about a ship cat and the boy she saved. 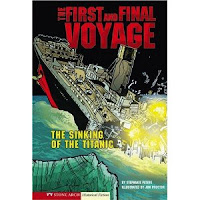 * The First and Final Voyage by Stephanie Peters. This is a short, graphic (as in comic book/text style) novel that my 10-year-old absolutely loved to read. I'm going to be looking for more historical novels by this publisher.
* Titanic by Martin Jenkins.
* Ghost Liners: Exploring the World's Greatest Lost Ships by Robert Ballard. Great book to finish off the unit. This explores not just the Titanic, but also other great ships that have been lost.

Movies
* National Geographic's Titanic: How It Really Sank. This was the best movie that we've seen about the Titanic disaster. Extremely engaging and informative. The kids loved it.
* Titanica: An Imax Presentation (95 min.)

Internet
* Eyewitness History: The Sinking of the Titanic. Read about the sinking from the perspective of a governess on board.
* Titanic Facts: True and Tragic
* Titanic: Hidden Expedition. This is a fun online game to find a treasure on Titanic.
* Encyclopedia Titanica. Loaded with information and stories.
* Discovery Channel's Last Mystery of the Titanic. Take a virtual dive, quizzes, hear video stories, and more.
* Escape the Titanic. My 10-year-old loved this game, although the premise of it is disturbing: As a third class passenger, the player is directed to "Escape from the sinking Titanic. Collect enough money to bribe the crew and get to the upper deck." Sigh.

• Family history: Make a family tree, going back as far as you wish. Be sure to write the surnames of your ancestors. Talk about whatever family history you know. Where did your ancestors come from originally? Point out the different countries on a map. Trace the route they may have taken over. Afterwards, search the passenger/crew list for names that belong to your child's family tree. The Encyclopedia Titanica has a fantastic list of all passengers and crew. We found our surname and a couple other names on our family tree. (You may like to find names of friends if you can't find any of your own family's names.) Talk about the names you've found. What class was the passenger in (first, second, steerage)? Where may they have been going? How might their lives have been changed after the disaster (particularly if one family member was lost and others survived).

* Class structure. Studying the Titanic provides a great avenue to discuss class structure. Ask your child if we still have a class structure today in the United States. He or she will most likely say "no." We launched into a long discussion about our own class system, ranging from homeless people to tycoons. We also briefly discussed the caste system of India.

* Science activity: Floating
Materials: 20 paper clips, foil, ruler, bucket of water
1. Have your child state why he believes heavy ships can float and what he thinks will happen with this experiment.
2. Cut two 12-inch squares from aluminum foil.
3. Wrap one of the metal squares around 10 paper clips and squeeze the foil into a tight ball.
4. Fold the four edges of the second aluminum square up to make a small one square pan.
5. Place 10 paper clips in the metal pan.
6. Set the metal pan on the water's surface in the bucket.
7. Place the metal ball on the water's surface.
8. Record what happens when in steps 6 and 7. The metal pan should float and the ball should sink. Have your child write an explanation of why this happened.
9. Discuss buoyancy and how it allows huge ships like the Titanic to float.
(At this point your kids will most likely want to test all kinds of different objects to see what floats and what sinks! Try to have them predict beforehand if an object will float or sink based on its density.)

* Construct the Titanic! My 10-year-old wonderful model of the ship with black construction paper. He used about 8 sheets to make it about 3 feet long by taping the paper together. He cut out all the details around the outside of the ship and used a white gel pen, crayon, or chalk to make the windows, etc. Looks really great! A great book to read along with this is Inside the Titanic. 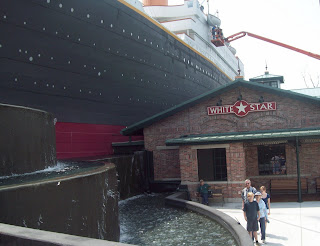 * Take an icy plunge! Fill a large mixing bowl with a lot of ice and add some cold water. When the water gets really, really cold, have your kids try keeping their hands in as long as possible. Discuss hypothermia.

The Titanic disaster still captivates people nearly 100 years later. Kids of all ages are fascinated by the ship, the people, and their stories. Whether you take a few days or a few weeks, I highly recommend taking some time to introduce your kids to this amazing slice of history.

Posted by Sarah @ Sarah at SmallWorld at 9:29 AM