These past 6 weeks have had the Twilight Zone air about them, the waiting kind of days. I wrote about The Waiting a few years ago, in the days preceding Randy's grandpa's death. We are waiting in my family now for what will happen next with Uncle Max. 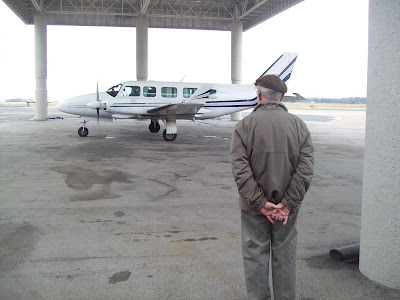 Last Friday, just two days before Christmas, a pilot and a doctor, two old friends of Max's, brought him to us in the pilot's plane. Uncle Max has lived his entire life—90 years— in Mt. Vernon, Illinois. The decision to bring him here to Tennessee was not made lightly. After three strokes and surgery, Uncle Max isn't doing well. He has a huge network of friends there who care greatly for him, but it is his family who has to make decisions—all those medical and financial ones. And hold his hand for hours and try to feed him one tiny spoonful at a time. My parents, who are in their 80s, and two of my brothers had made several trips already to and from Illinois. We made the decision to move Max here to a local long-term care facility, and things fell quickly into place.

I love this picture of my father waiting for the plane. Uncle Max is my mother's older brother, but my Dad and he were roommates at the University of Illinois first. It was on a trip from the university to Mt. Vernon that my father first met Max's younger sister. The story goes that Mom and Dad sat in the backseat and played Battleship (on paper of course, not the board game) all the way home. When my father came into the house, my grandfather said, "That's the man you're going to marry."

But this is about Uncle Max. Except that Uncle Max is part of them, part of us. Although we had dozens (literally) of great-aunts and -uncles, my brothers and I had only 3 "real" ones: my mother's brothers Henry and Max, and my father's sister, Ann. Uncle Henry died many years ago; Aunt Ann passed away just this August; and now there is just Uncle Max. He's the one, though, that has been the biggest part of our family. He is ours, and we have been his.

I love this picture because in it are two of the Greatest Generation: my father and my uncle, both World War 2 vets. My uncle was actually a D-Day pilot, flying Operation Overlord in June 1944: Utah, Omaha, Gold, June, and Sword Beaches. My father came to Europe three months later, 18 years old. And now here they are, 65 years later. It breaks my heart but fills me with unspeakable pride. And gratefulness.

Linked up with Wordless Wednesday and 5 Minutes for Mom
Posted by Sarah @ Sarah at SmallWorld at 8:41 AM