On the Menu (with Oven Chicken Stew recipe)

The past two weeks have been very delicious. Pinterest provides a treasure trove of new and fresh recipe links, and I've added a few new favorites to my On the Menu list:
I've also tried a few recipes that weren't terribly exciting. Why is it always the ones that promise "Better than PF Changs!" or "The best I've ever had!" that are the failures?

One I just made a couple of nights ago and will be having again soon is a version of Shove-It-in-the-Oven Chicken Stew. I made several changes from the original recipe, so here is my version. this was a big hit in my family: 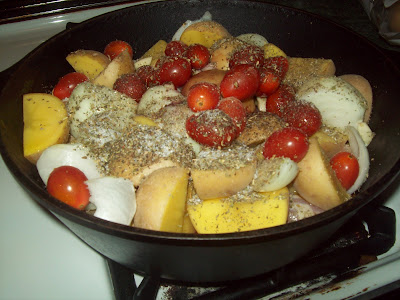 Adjust oven rack to near bottom position and heat oven to 425 degrees.

Mix everything except the chicken broth in a large roasting pan or cast-iron skillet. Cover, set pan in oven and roast about 30 minutes. Remove cover, add enough broth to form a stew, stir, and put in oven for another 15 minutes. Serve with warm, crusty bread.
*You may wish to leave the potatoes out and serve this with a side of mashed potatoes.

So here's what's on our menu for this week:

Plus, one night my daughter is cooking and one night we are going to a Chinese restaurant celebration of Chinese New Year!

Linked up on Taste This Thursday, Tasty Tuesday and Menu Plan Monday

Posted by Sarah @ Sarah at SmallWorld at 8:59 AM