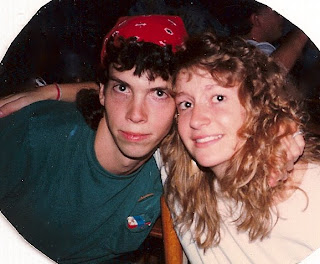 Just look at us! Aren't we the most dewy-eyed little crunchy granola-heads? This photo was taken just a week or so after our engagement, 20 years ago last Thursday. It's not an occasion we've ever officially celebrated, other than, "Hey! We missed the anniversary of our engagement!" But this year we actually did remember, in the middle of ER sometime between 10 and 11 p.m., and Randy said, "That was still one of the hardest things I've ever done."

He's talking about asking my father for permission to marry me. My father is not a scary guy, but Randy wasn't exactly, on the outside, the most stellar candidate for marriage: he'd dropped out of college and was temporarily employed as an apple picker. There was also the long hair and earrings. And, to top it all off, I am the youngest of five, and the other four are boys. What kind of father would willingly agree to let his baby girl marry a long-haired college drop-out with no real plan for the future?

My father. Because he always saw Randy's potential.

And so that September afternoon, 20 years ago, Randy and my Dad played a game of tennis. Randy doesn't remember a bit of the game because he knew that, on the way home, he would ask my father for his daughter's hand in marriage.

And he somehow managed to get the words out, and my father granted him permission.

And we lived happily ever after.
Posted by Sarah @ Sarah at SmallWorld at 3:20 PM