Life Before Kids: I Was a Census Enumerator 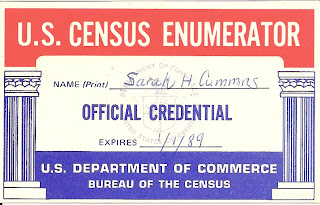 So my mother brought this over to me the other day: "Look what I found, honey! Remember when you did this?" Yes, I remember quite well. But what I mostly think is—and my mother joins me in this now—is: how could my mother have allowed me to do this job?

I had graduated from college just a few months before I began this job in October 1988. Randy and I had gotten engaged in September and were to be married in March; so I was just biding time at home in New York, embroidering my trousseau, until I moved back to Tennessee. I needed to earn some money, but getting a "real" job was silly since I'd be leaving the state in just a few months. So I entered the world of temporary employment.

For a couple of months I worked at Cornell University's New York State Agricultural Experiment Station, where my father did research, as, well, I have no idea what I did actually. I picked experimental raspberries, measured them, and recorded the data. (Just the kind of thing an English major is trained for.) That's all I remember.

I put my name in as a substitute teacher and got called frequently. That was hideous. But that could be another whole post. And then one day my mom read in the paper, "Census Workers Needed. Good pay." And whatever the pay was, it was pretty good. So I took the Census Workers test and passed, and was then given my route.

Here's what I did: every morning I went to my district manager's apartment. (Hmmm. Should my parents not have been concerned that their daughter had to go to a creepy man's apartment every day?) He gave me my daily assignment. I then went to the village of Interlaken, about 30 miles from my home. According to Wikipedia, "As of the census of 2000, there were 674 people, 256 households, and 175 families residing in the village." I'm sure the population of Interlaken was right about the same a decade before, and I have probably knocked on the doors of most of those 256 households.

My job was to go door-to-door, asking who, exactly, lived in the houses, and marking them on my little chart. Yes, I walked up to houses with sagging porches and yards full of engine parts to ask, "Excuse me, but are you Mr. So-and-So and who else lives here?" I knocked on beautiful old houses and was told by sweet old ladies that they were living all alone now. I drove out in the country and fought off barking dogs. Sometimes I'd circle around a particularly creepy-looking house, summoning the courage to pull in the driveway and knock.

But nothing slightly bad or scary ever happened, other than the barking dogs. I know my mother was praying for me every day. I remember this as a quiet, lonely job, in spite of all the people I encountered each day. This was before the days of cell phones, but it was also before CSI and other such shows. I can't imagine now letting a 22-year-old daughter go from door-to-door out in the middle of nowhere, any more than I can imagine letting my 8-year-old ride his bike 5 blocks away to the corner market, as my mom did with me. This always leads me to ponder: are people really more horrible than they were 20-30 years ago, or have we just watched too much TV?

Anyway, at the end of each day I'd return to my harmless, lonely manager's apartment and turn in my daily log. I did this job for about 6 weeks and was tremendously happy when it was over. It was certainly one of the oddest jobs I've ever had and way outside of my comfort zone. Knocking on strangers' doors? Was that really me?

So what should I write about next: my life as a telemarketer for the Shriners' Circus, or my career as a Shoneys waitress? Both were unforgettable experiences.
Posted by Sarah @ Sarah at SmallWorld at 8:31 AM