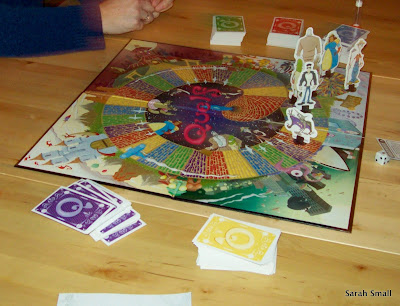 I love board games, and I'm usually fairly aware of what's floating around, but my parents surprised us this year with one we hadn't heard of, Quelf. The kids said they'd seen it on TV (shocking), but it was totally new to me.

This game is absolutely hilarious! Somewhat like Cranium on steroids, the game calls for players to perform, make, or answer questions depending on the category. For example, my mother had to make a mask using things she could find in the house before her next turn and then wear the mask until she landed on a green space. 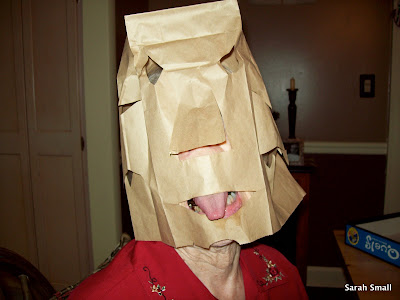 It took her a long, long time to land on a green space. In the meantime, she had to stand up and dance the Can-can during another challenge. Categories include Roolz (my brother, for example, had to pretend to play the piano every time someone rolled a 1), Scatterbrainz (everyone has to name something in a particular topic, like US Presidents, until someone goofs), Stuntz (like a staring contest), Quizzle (trivia-type questions), and Showbiz (like the Can-can).

We had eight players from 12 to 84. I think my nine-year-old could play this OK, but it would be challenging for him. The game promises to take about an hour, but we were nowhere near the finish line when we called it quits after 2 hours. We all laughed soooo hard during this two hours; I'm not sure we could have lasted much longer! I see great possibilities with this game for mom/daughter game nights and other board game nights. In fact, I'm already trying to figure out when I can have a few goofy, board-game-loving friends over…
Posted by Sarah @ Sarah at SmallWorld at 9:09 AM