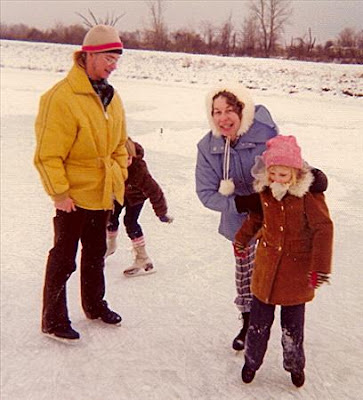 For the first time in the 10 years that we've lived here, many of the ponds have been frozen—or at least had a thin layer of ice on top. When I was growing up in upstate New York, ponds provided hours and hours of entertainment. I learned to skate at two, first with skates with four blades, then with two-bladed skates, and finally to pretty white single-blade skates. I can remember my brothers, parents, and neighborhood kids shoveling snow in paths across the ice until the whole pond was cleared and ready for hockey. Stephen and I skated around the edges during the maniacal hockey games, always prepared to dodge a misdirected puck. On those ponds I learned to skate around and around, backwards, stop, and even do a few ungraceful spins that felt very professional.

When I was in sixth grade, the research station to which the ponds were attached put a ban on ice skating. About that same time our city opened its first indoor skating rink, so all skating moved to the rec center as I moved into the teen years. Something magical was lost. Cold, moonlit nights. Saturday afternoon hockey games. Paths cut through the snow.

My senior year in high school, my boyfriend and I and another couple decided that New Year's Eve was the perfect time for skating on the old ponds. We spent a couple of hours that night skating around and around, laughing and watching the winter stars. The smell of clean snow and scrape of blade against ice. The pure quiet of a winter night.

I've only been skating a few times since then, on public rinks under fluorescent lights. It's one of those memories I hold onto, hoping that some time I might find an old farm pond for a midnight skate.
Posted by Sarah @ Sarah at SmallWorld at 5:56 PM