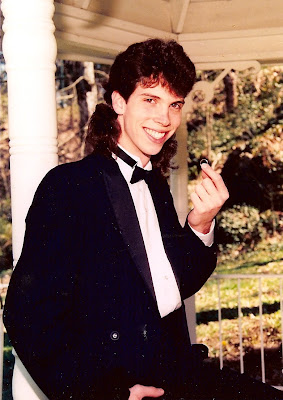 Our 21st anniversary is coming up in a few days, and for some reason I had this picture stuck in my head when I thought about a Monday Memory. Randy's holding my ring, and our rings, in their utter simplicity, are one of those things I love so much about us.

We decided to get married, 21 and 1/2 years ago. We needed wedding rings, but of course we didn't have any money. So we went to a local store called Brendle's, which is pretty much like Sears. A step up from Walmart, you might say. I wanted a simple gold band; he wanted a slender white-gold one. Our rings cost $19.99 each. And that was all there was to it.

It wasn't until much later that I learned that people—real people that I actually know—spend thousands of dollars on wedding rings. And that made me love my $20 ring even more.

I still have my ring, although for our 10th anniversary, Randy bought me an anniversary band. Just a tiny bit fancier, but still simple. Like us. And I wouldn't trade it for the biggest rock on earth.

Well, unless my fingers get too fat and I have to cut the ring off. It could happen.

So tell me: how much did you spend on your wedding ring? Just kidding! I really don't want to know. I just hope it looks as right on your finger on your 21st anniversary as mine does.
Posted by Sarah @ Sarah at SmallWorld at 9:58 PM