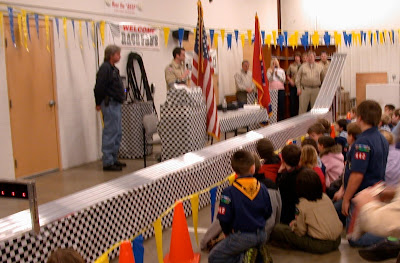 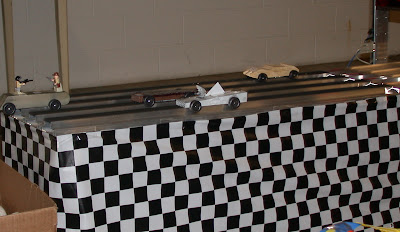 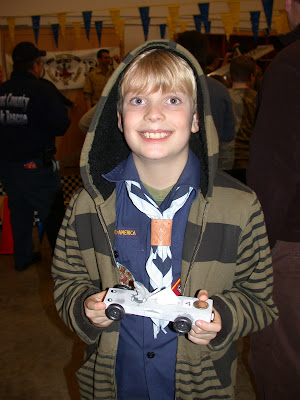 Last night was Pinewood Derby night for our Cub Scouts. If I've calculated right, it's our eighth one between the two boys, and Randy's been the Cubmaster for six of them. This was by far the easiest and fastest. This year our county's fire department, in an effort to reach out to the community more, invited all Cub Scout packs in our district to come to the fire station for their derbies. The fire department invested in state-of-the-art aluminum track, software and all the bells-and-whistles (like a recorded screeching car sound) that our pack could never have dreamed of buying. It was fantastic. With 35 cars racing, the race took about 45 minutes instead of the usual 2 hours or more. The winners were quickly calculated, and the top three racers got to race against the Fire Chief!

It was an awesome night. I can remember years ago when we had to actually time the cars with hand-timers and write out the winners on paper, calculate winners' brackets, and have do-overs. Invariably, a few parents and kids were unhappy because something didn't seem to be calculated right or the track was lopsided or a race was so close that it was hard to tell who really won. It was very stressful, especially for the Cubmaster. Through the years, many of those variables were eliminated with a better track and better technology, but the fire station's set-up was absolutely fantastic.

And in case you were wondering, not that winning matters (whatever), Duncan's car took 10th place, and he was very happy for his friend Caleb who came in 2nd.