I love looking through what's on the camera and finding pictures that my kids have taken. There is something so intriguing and invariably touching about my kids' photographs, because this is their world.

At some point in the past week, my 9-year-old did a photo documentary on Reptiles vs. Lego Guys. It appears to have started out rather reasonably. The guy on the horse is clearly the emissary, perhaps sent to forge some kind of compromise or agree on the terms of the battle. 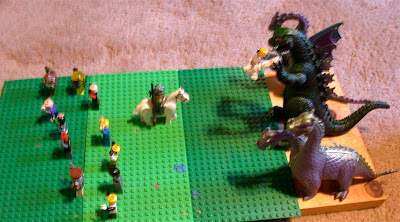 After this picture, there are a whole bunch of pictures of the battle. Trust me, things did not go well for the Lego Guys. I found a disturbing number of photos of the largest dinosaur eating Lego Guys. There was also a series of photos that involved the (real) tarantula. Some Other Guys appeared to be guarding its cage. 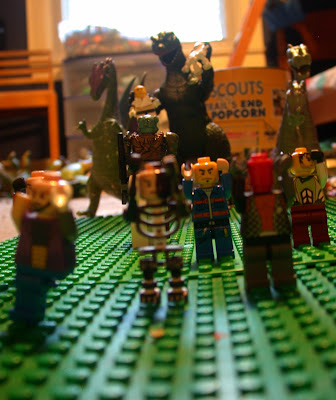 The Lego Guys eventually surrendered. I thought this was actually a really good photo. Loved the perspective and thinking about Duncan actually getting down on the ground, eye-level, to shoot this one. And this next one, he evidently stood on a chair to look down on the whole scene. 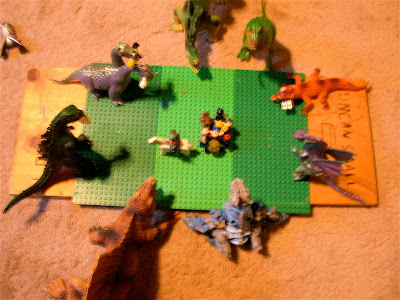 I'm not sure what happened after the Reptiles surrounded the Lego Guys. There are no pictures after this one. Was it lunch time for Duncan? Did I walk in and trip over a three-headed dragon and then say "Clean your room!" without noticing the intricacies of the battle? I hope not.

I loved being part of Duncan's imaginary world via his photographs. I can tell that he was very serious when he documented all of this—that in his mind this battle was really happening. To me each Lego Guy looks like the next one, but to Duncan, they each have their own personalities and special abilities. I am cherishing these days when I still have one left who can spend hours lost in an imaginary world that involves dragons and Lego Guys who are half-Ninja, half-Harry Potter. It's a sweet gift, this world of imagination.

Linked up on Just for the Joy of It, Tuesdays Unwrapped, 5 Minutes for Mom, Seven Clown Circus
Posted by Sarah @ Sarah at SmallWorld at 9:12 AM