I love to create family traditions, and I think we may have begun a new one last night. New Year's Eve was always a big deal when I was growing up—or at least in my memory of it after age 11 or 12. My older brothers and their wives and families were usually back home for the holidays, and we played games and ate snack food until the ball dropped. In high school and college I went to friends' houses for New Year's Eve parties or such. I remember one moonlit New Year's Eve when some friends and I went ice skating on an orchard pond in my snowy hometown.

We haven't been at home for New Year's Eve in a few years. We usually take this time to go visit Randy's brother in North Carolina or his mom in Indiana. But this year we opted to stay here. His brother and sister-in-law ended up coming in earlier in the week and surprising Randy for his birthday, which was fantastic. (They also surprised us all with a Wii and several Wii games, including Guitar Hero World Tour. We have been having a blast!)

So we decided at nearly the last minute to have a few friends over to celebrate. Right before I went to the grocery store yesterday I looked at Family Fun.com for any quick and brilliant party ideas, and I found one that I could manage with limited time and funds: 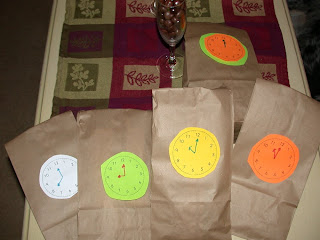 These are countdown bags. I made one for each child for each hour, beginning at 8 p.m. I was seriously scrounging to come up with cheap ideas for the contents, but my trusty sidekick Laurel helped me and here is what we ended up with:
8:00: Plastic fork and Happy New Year napkin. This was the signal to come in and eat Confetti Cake! 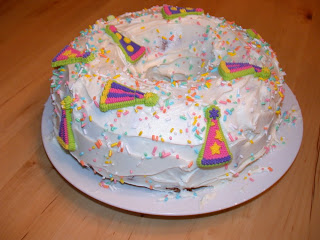 9:00: Piece of paper and a marker, with the directions to draw something(s) significant that happened in 2008. They took this very seriously, all settling down into the living room and carefully recording their year. (This was a perfect time for the grown-ups to play Guitar Hero.)

10:00: Bubbles and balloons. They ran outside to blow bubbles, and I'm not really sure what they did with the balloons. My idea was for them to blow up their balloons and race to pop them, but I never actually communicated that. Whatever they did, they had fun.

11:00: Glow-in-the-dark mouthpieces. These are like glow-sticks for the mouth. Again, there was no purpose for these other than to have fun.

12:00: Predictably, party hats, horns, and confetti. I had a hard time finding these things, which is something that happens when one waits until the last minute to make decisions and plans. I'm thinking I might head out to the party store today to pick up some for next year!

It was lots of fun. My kids were immediately begging, "Can we do this again next year?" I love that moment when a memory is created.
Posted by Sarah @ Sarah at SmallWorld at 9:02 AM