Dr. H. and I have an obsession with t-shirts. Not only do we have drawers full of t-shirts in current use, but we also have actual boxes taped up and marked "memory t-shirts." These are t-shirts that are so worn out and ripped that they had to be taken out of circulation, and yet we couldn't bear to part with them because of their sentimental value. I have vague visions of a t-shirt quilt. Someday.

This evening I was suddenly taken with the need to open up the box marked "memory ts" in our closet. I'm glad I did; not only did I find some of our most memorable t-shirts, I also found a brick from Randy's dorm, Pardee Hall, which was torn down many years ago. And here are a few of the t-shirts I found in that box: 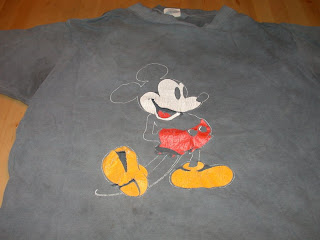 This is probably the oldest in our collection. A girl Randy dated in high school brought this back for him from Disney World. (It's okay, he can't even remember her last name. So he says.) We refer to it fondly as his "graduation shirt." He wore it to his matriculation and then every graduation ceremony since then, including mine and his and all of our friends' ceremonies, too. We'll have that dusted off for Jesse to wear next year at his graduation. 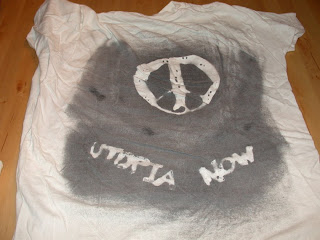 What do you do if your college doesn't have sororities? Make up your own. Ours was originally called the Utopia Now Women's Club, and we met every day at 5 p.m. in my dorm room. We wore our t-shirts frequently, especially when we were going out on the town. (This falls under the popular categories: why and what were we thinking?) 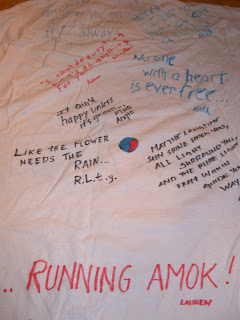 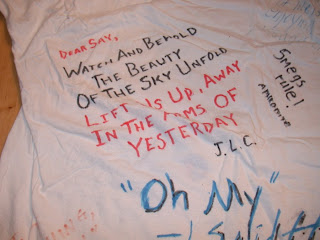 This was a fabulous night in many ways—the night before I graduated from college in 1988. We had a big party which included signing t-shirts. Dr. H. and I had been broken up for 7 months, and I was dating someone else then. (It's a long and sordid story, but you can read it here.) But on this particular night, Dr. H. sent me a message on my t-shirt. See it up there by the yin-yang? "Like the flower needs the rain..." Now what's a girl to do with a secret message like that? I knew him too well not to read something into that. Yep. 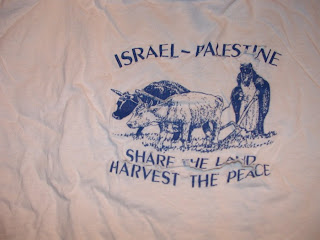 We were quite politically attuned back then. I find this one particularly relevant. It got worn a lot. I wish it weren't so worn out so we could start wearing it again. 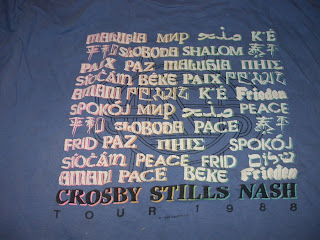 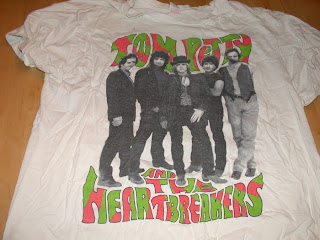 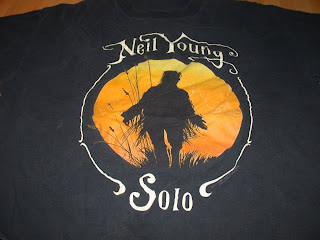 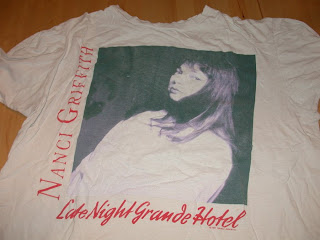 And then there are the concert tees. This is just a small sampling of the numerous t-shirts on which we spent what little money we had. We would rather have spent $20 on a t-shirt back then than on food. No wonder we were so skinny.

I'm amazed at how powerful a piece of cloth can be. I felt that autograph t-shirt and pictured friends sprawled on the floor, markers in hand, and smelled the mustiness of that party house. The sorority t-shirt has me sitting on my bed in Sutton Hall with a hot cup of tea, waiting to hear the daily drama and making plans for that night.

That's one box that'll never go to Goodwill. Who'd want them, anyway?
Posted by Sarah @ Sarah at SmallWorld at 8:51 PM