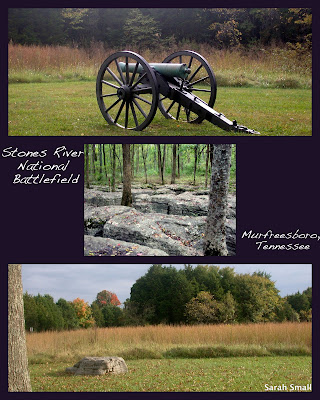 (Clicking on the pics makes them really big.)

We made a trip to Nashville this weekend to visit a college and swung by Stones River National Battlefield in Murfreesboro, Tennessee on our way home.

The Battle at Stones' River was fought over the course of three days, from December 31, 1862, to January 2, 1863, and was one of the bloodiest conflicts in the Civil War. 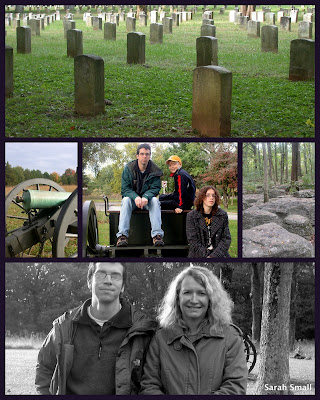 The battle produced important military and political gains for the North, and it changed forever the people who lived and fought here.

On the final day, more than 3,000 soldiers lay dead on the field, and 16,000 more were wounded. Some of these men spent a week on the battlefield before help could reach them. Together, the Union and the Confederate armies sustained nearly 24,000 casualties, which was almost one-third of the men engaged. 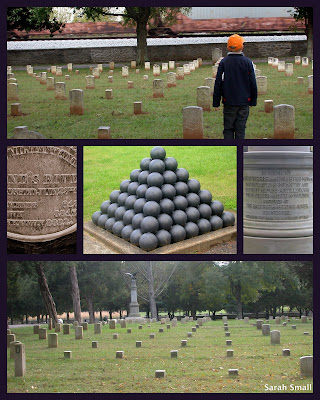 “I cannot remember now of ever seeing more dead men and horses and captured cannon all jumbled together, than that scene of blood and carnage … on the (Wilkinson) … Turnpike; the ground was literally covered with blue coats dead.”
~Sam Watkins of the First Tennessee Infantry, CS 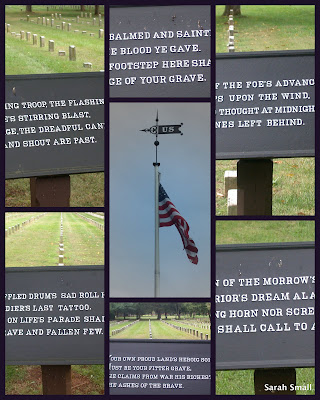 Across the street from the battlefield is the Stones River Cemetery, which holds Union soldiers. Through the cemetery are signs featuring stanzas from a poem written by Confederate officer Theodore O'Hara.

The muffled drum's sad roll has beat
The soldier's last tattoo;
No more on life's parade shall meet
That brave and fallen few.
On Fame's eternal camping-ground
Their silent tents are spread,
And Glory guards, with solemn round,
The bivouac of the dead.

You can read the whole poem, "Bivouac of the Dead," here.

It's always a somber experience for me to visit Civil War sites. Visiting Gettysburg was a fantastic experience, and we are only just beginning to tap into the amazing Civil War history here in Tennessee. The sheer amount of history we could be soaking in just amazes me, and with every trip we take, I'm determined to take more.
Posted by Sarah @ Sarah at SmallWorld at 10:50 PM