* Some major events have happened around here this week. First, Jesse got his driver's license! I'm not quite used to having another driver in the house yet, but it's already been very handy. He took his test Tuesday and his insurance came through on Thursday, so he was able to drive to class himself Thursday morning. Boy Scouts was Thursday evening, and Randy said, "I'm so tired [after a day of work and Cub Scouts]. I wish I didn't have to go to Boy Scouts." Suddenly it dawned on us: he didn't actually have to go! Jesse could drive himself! We are in the process of trying to find a very cheap used car for Jesse now. He has lots of money saved, and we've been working on it, too, so hopefully the perfect $1000 car will appear in our driveway soon.

* The next milestone isn't quite so life-changing but it is flabbergasting to me: my 12-year-old daughter now has a bigger shoe size than I do. I really wasn't expecting that; she's so petite. But we went to get new running shoes today, and she actually had to get a half-size bigger than I did. Sigh. We only got to share shoes for about 4 months! I just assumed we'd always wear the same size, and I assumed she'd be my height, as well. Now I'm thinking that she may be taller than I am!

* Duncan is done with his Montessori classes, so we got quite a bit more "done" this week at home together. We finished reading a biography of George Washington Carver and watched Booker, a great movie about Booker T. Washington.

* I went through my file of free lapbooks I've downloaded from CurrClick and found The Great Inventors study guide from A Journey Through Learning. Perfect! We did George Washington Carver and Thomas Edison and will begin working on the Wright brothers, Henry Ford, and Alexander Graham Bell in the next few weeks. We may be inspired to go back and do Robert Fulton, George Eastman, and a couple of others—or we may just be happy with the later 19th century on!

* We had a good math week. Duncan is doing great with memorizing math facts, something that I seriously slacked off on with Laurel. But Laurel is finally moving faster with her facts, and I think by the time she gets to algebra, she'll really, truly have everything memorized!

* For the first time in 10 years of homeschooling, I started a reading incentive chart for the kids. After reading 15 books, they get a prize. I know—that's very public school, accelerated-reading of me. But it's been effective especially for Duncan, who tended to begin a book and never finish it. Laurel's become a truly voracious reader this past year or two but she still enjoys the incentive.

* I gave my first exam last week in my World Lit/Geography class I teach for high schoolers, and I am sooooo happy at how well the kids did. Their essays were fantastic, and I'm happy to say that nearly all of them got close to 20/20 on their Middle East map quiz. This week we started reading and discussing Things Fall Apart by Chinua Achebe, focusing, of course, on Africa.

* In the middle-school Literature Circle class I co-teach at our co-op, we finished talking about Lois Lowry's Number the Stars this week. We had the kids come up with their own book cover design using symbols from the book, and we had some fantastic designs. At our next class, we'll begin discussing Snow Treasure, looking at World War 2 from yet another perspective.

* We didn't get to creative writing this week, but we did get back to our Wednesday art studies. This week we are studying Albrecht Durer. There is all kinds of great stuff out there for studying art, but we've been using Focus on Artists. It provides a good survey but is quite uncomplicated. We didn't quite finish studying Durer, but the kids did begin a neat project. More on that next week.

* This week in American Heritage Girls, our middle- and high-school girls had to learn how to do lashing as part of their outdoor skills badge. Lashing? Yep, these girls were supposed to make a usable camping structure using sticks, rope, and tarp. I think they did a pretty good job—although I'm not sure I'd like to depend on one of these during a big rain ! (Click on the collage for a larger view.) 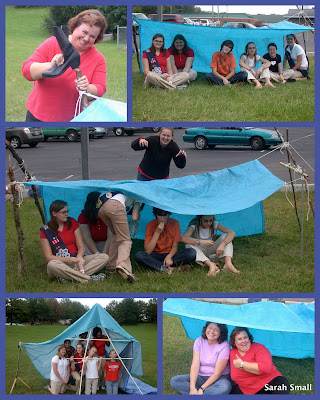 * Next week we'll take fall break on Thursday and Friday. I have a huge list of projects to tackle/finish during the week, and one of them I already did today. Below is a picture of what is really the playroom, but more aptly called "the room where we throw discarded furniture and all sorts of junk." It could also be called the living room to Jesse's bedroom, but he never really uses it. 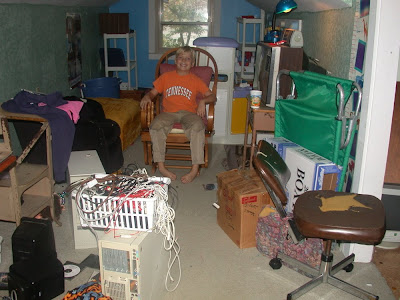 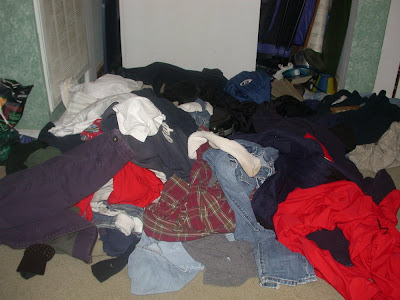 Yes, we are disgusting. See, the thing is, this attic room is really, really hot in the summer. One day I started sorting through Jesse's old clothing and got too hot, so I never got back up there again to finish. I'm kinda bad about that. The first picture? Yeah, well, it's like the Island of Misfit Furniture. 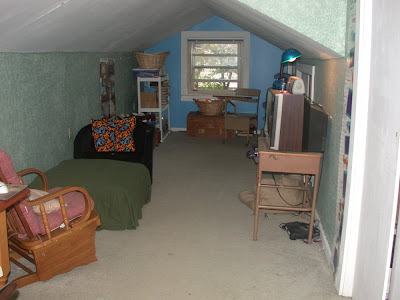 I spent a couple of hours cleaning and sorting, and now I can cross my first project off the list! Yes, it's still the Island of Misfit Furniture and Assorted Items that We Don't Know What to Do With (and does that TV actually work? No one knows!), but at least it's clean and walkable.

Duncan was so excited that he's going to sleep up there tonight. (Shhh--don't tell him there is a scary doll from my childhood in the closet! I once had a nightmare about her, but that's another story.)

How was your week? Sort it out and write it at the Weekly Wrap-up. You probably did more than you think you did!
Posted by Sarah @ Sarah at SmallWorld at 7:56 PM