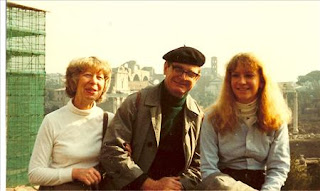 Heidi at Mt. Hope Chronicles got me thinking about Paris this week; she's been posting gorgeous photos as usual. Twenty-six years ago (!) I had the opportunity of a lifetime. My father was a Fulbright scholar at Justus Liebig University in Giessen, Germany (then West Germany) for six months, and during that time we traveled extensively throughout Europe. This was my junior year in high school; I think of it now as the year I homeschooled myself. My teachers back in the States gave me my textbooks and assignments. I finished them in a couple of months and then read voraciously and traveled with one eye on the sites and the other on Fodor's. I kept a detailed travel journal, as well. (I believe much of it is plagiarized directly from Fodor's. I know I justified this by thinking that no one but me would ever read my journals!)

Here is an excerpt from January 3, 1983, which goes along with the photo above:

We are now in Paris! Today we went do the Arc de Triomphe, a monument to an Imperial epoch. It shelters the tomb of the Unknown Soldier. It is a gigantic composition where figures 6 feet high crowd in hundreds, depicting the departure of the French armies and their return. … Every evening, as we saw, the flame of remembrance is lighted. We also went to the Invalides, which is generally considered the finest architectural composition in Paris. … From there we went to the Church of St. Louis. … After that we went to Napolean's tomb. The tomb is beneath the cupola of the church. Napolean's body was placed in six coffins, each contained inside the other. Twelve huge figures, sculpted by Pradier, stand against an open gallery. Above the bronze door that leads to the crypt are Napolean's famous words: "I wish my body to rest near the banks of the Seine, in the midst of the French people I loved so well." Tomorrow we'll visit the Eiffel Tower.

I was sorry to see that I somehow skipped writing about the whole incredible New Year's vacation we took prior to our trip to Paris. We spent several days skiing in Chamonix, France. I don't have a single picture or an entry in either my regular journal or my travel diary. (I suspect I'm missing an entire album of photographs. I may have to launch an exploration to the farthest corners of our attic storage.)

Paris was just one stop on this incredible six-month traveling spree. We visited countless castles in Germany; art museums from a tiny private basement in Rome to the Louvre— hidden treasures to masterpieces; breathed in cathedrals and listened to ancient church bells. My dream is that we will be able to share such an experience with our children. It's not an unreasonable dream: my husband can take a sabbatical at any time now, provided he submit stacks of paperwork and get approval from the various powers-that-be in various high-up places. But it's not unattainable.

Where would you spend six months if you had the opportunity?
Posted by Sarah @ Sarah at SmallWorld at 9:17 PM