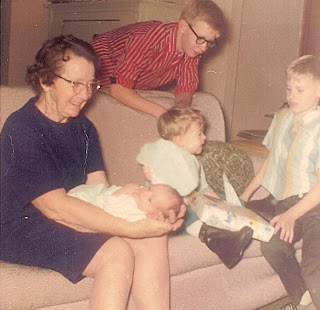 Nope, I don't remember this one. That's me, home from the hospital, 43 years ago tomorrow. My grandmother, Gladys, is holding me, thrilled, no doubt, with a granddaughter at last. Next to me are three of my four big brothers: Stephen (2), Peter (nearly 9), and James (15 1/2). Missing is John (12 1/2). We lived in Carbondale, Illinois, which I also don't remember.

In celebration of my birthday, I decided to do every birthday meme I could find out there.

Here's the first:
1) Go to Wikipedia
2) In the search box, type your birth month and day but not the year.
3) List three events that happened on your birthday
4) List two important birthdays and one death
5) One holiday or observance (if any)

Events:
1600 - Philosopher Giordano Bruno is burned alive at Campo de' Fiori in Rome, charged of heresy.
1801 - An electoral tie between Thomas Jefferson and Aaron Burr is resolved when Jefferson is elected President of the United States and Burr Vice President by the United States House of Representatives.

Wasn't that exciting? And now for the second birthday meme…
Except, I can't find another one. What's up with that? Someone needs to come up with a new birthday meme.…
Perhaps I shall make that my project tomorrow, since we don't do school around here on birthdays!
Posted by Sarah @ Sarah at SmallWorld at 4:04 PM